The impact of educational intervention on prescribing trend of vitamins at primary health care level was investigated by analyzing 2000 prescriptions containing vitamins. Prevalence of vitamin prescribing was 30.2, 38.7 and 45.4% and contribution of vitamins in the cost of drugs prescribed in vitamin containing prescription was 27.6, 30.4 and 41.9% at Upazilla Health Complexes (UHC), non-government organizations (NGO) and private practices (PP) respectively. Both parameters significantly (p<0.001) decreased after intervention. Prescribing of single vitamin preparations was 3.8, 13.9 and 7.8% and appropriateness of the vitamin prescribing was 14.6, 24.1 and 14.8% at UHC, NGO and PP respectively. Both parameters significantly (p<0.001) increased after intervention. Negligible emphasis on vitamin in pharmacology teaching at MBBS level was observed. Dependency on promotional materials of manufacturers were changed after intervention. In conclusion, knowledge deficiency due to inadequate professional training and dependency on biased information perhaps contributed in irrational prescribing of vitamins.

The physicians have been prescribing vitamins for different reasons since hundred years. Since 1982, only few vitamin preparations were available in Bangladesh, of which majority were single ingredient preparations [Drug (Control) Ordinance, 1982]. People were being satisfactorily treated with those vitamins. Though information relating role of multivitamins in disease prevention is weaker than the individual vitamins (Rosenberg, 2007), multivitamin prescribing has became popular since its availability (Rock, 2007). Bangladesh is neither an exception, the consumption of vitamin has increased recently in Bangladesh (IMS, 2006), which perhaps resulted as consequence of entry of multivitamin into the market (BDNF, 2006). The growth of vitamin market is difficult to rationalize only on the basis of nutritional status of the people, as there was no sudden change in that situation.

In Bangladesh, people usually take thiamin and niacin more than their daily requirements (Jahan and Hossain, 1998a), though riboflavin and vitamin C deficiency were observed in few people (Jahan and Hossain, 1998b). In deficiency of specific vitamin, that particular vitamin might be prescribed in individual cases (Wirth, 2006). However, vitamin prescribing has increased significantly without confirmation of specific deficiency or evidence of lack of specific vitamin in the diets of the people (Anonymous, 2006). Prescribing of vitamins in this manner offers little or no benefit to the recipients, rather causes excessive intake of prescribed vitamins, which might even become harmful (NIH, 2006).

Different studies revealed controversial facts about the status of vitamin in clinical medicine (Tribble, 1999; Omenn et al., 1996; Leppala et al., 2000; Stanner et al., 2004; Huang et al., 2006; Bleys et al., 2006). The teaching of pharmacology in undergraduate medical curriculum is mostly drug centered and the number of hours spent on teaching therapeutics is very low when compared to pharmacology (BMDC, 2002; Rahman, 1995). In the undergraduate medical course, vitamins are taught in different subjects though not in detail. Therefore, the pharmacological issues related to vitamins should be taught and evaluated in detail in the course of pharmacology. Moreover, the skill to critically appraise the scientific evidences is not properly achieved by the physicians during their undergraduate program. Consequently, the prescribers mostly depend on advertisement and literature of the pharmaceutical manufacturers rather than scientific articles (Rahman et al., 1999). Thus, the physicians are prone to the influences of the industries and therefore, often prescribe inappropriately.

As the resource of the people of Bangladesh to purchase drugs is limited, wastage of money for inappropriate vitamin prescriptions would make them unable to procure the core, essential and life saving drugs. Consequently, their suffering from different morbidities might be prolonged. Educational interventions like academic detailing and feedback, regulatory interventions like provision of guidelines and different managerial interventions were found successful regarding improvement of prescribing (Arhinful et al., 1996; Islam et al., 2007).

Considering the above facts, the present study was designed to analyze the prescribing trend of vitamins at primary health care level, i.e., Upazilla level. Initially, a baseline survey was conducted, then the reason behind such practice was investigated and finally according to the findings of the investigation, an educational intervention was designed to improve the vitamin prescribing habit. Finally the impact of the educational intervention on different aspects of vitamin prescribing was evaluated.

Data collection method: Two sets of data, i.e., one retrospective set and one prospective (current) set were collected from the UHCs and NGOs to minimize the limitations of socially biased prescribing. However, in case of PP, due to unavailability of retrospective data, only one set of prospective (current) data was collected. The retrospective data were obtained from the treatment records of the outpatient medical registers of the UHCs and NGOs. The prospective prescriptions were collected from pharmacies, from patient or from their attendants outside the Upazilla Health Complex campus, NGO campus or private chambers while they leave the area. After collecting the prescribing information, an in-depth interview and questionnaire survey was executed among the prescribers of the facilities. Through these surveys, perception of prescriber about appropriateness of vitamin prescribing was assessed by comparing the mentioned indications with that of BDNF (BDNF, 2006). In addition, their commonly consulted sources of information were enquired in the same survey.

Criteria for exclusion: Prescriptions of the physicians with post-graduation degree in any specialty.

Contribution of vitamins on cost of prescribed drugs: Unit cost of each drug in a prescription was calculated from BDNF considering the cheapest price of that particular drug. Total cost of the drugs and that of the vitamin preparations in a prescription were calculated.

Proportion of cost shared by vitamins = Total cost of vitamin preparations of prescriptions divided by the total cost of the drugs mentioned in those prescription multiplied by 100.

After data collection through above-mentioned methodology, an educational intervention designed on the basis of the baseline findings was executed. After execution of the intervention, another set of data (2000 prescriptions) was collected.

Description of the intervention: Step I (Focus group discussion and feedback strategy): According to the convenience of the UH & FPO of the concerned upazilla, a Focus Group Discussion (FGD) was arranged with the UH & FPO in the chair and all prescribers of that UHC as participant. In every facility, two sub groups were arranged for FGD. First, the researcher introduced himself as facilitator and requested the participants to introduce themselves. The objectives of the discussion were described. Then the researcher informed them about the required information and the plan of utilization of the obtained information. The before intervention data were disseminated to the prescribers during FGD as a component of the feedback strategy. The responses of the participants were written down and summarized. All summarized information compiled together and the validity of the information was verified. The FGD with feedback strategy were arranged in all the facilities with more than one prescriber and for the remaining, feedback was provided as one-to-one discussion.

Table I: Impact of educational intervention on vitamin prescribing

Table II: Impact of educational intervention on regular consultation of different sources of drug information by the prescribers (n = 30)

The allocation of teaching time for vitamins was 1.1% of the total time allocated for the lecture schedule of Pharmacology course mentioned in the Curriculum for Undergraduate Medical Education in Bangladesh 1988 and reduced to 1.0% in 2002. In case of tutorial and practical classes no time (0.0%) was allocated for these purposes.

This study was conducted among medical graduates working at primary health care facilities of purposively selected four upazillas. Prevalence of vitamin prescribing among 3 types of facilities was high and varied. The prevalence observed in this study is much higher than the results obtained in the previous study conducted in Dhaka metropolitan city (Roy et al., 1995). The intervention of the present study has reduced the prevalence of vitamin prescribing in UHCs, NGOs and PPs. The reduction possibly reflects the positive attitude of the prescribers regarding change in vitamin prescribing. In few studies conducted earlier, NGOs having 'revolving drug fund' system were found to have good prescribing trend (Umenai and Narula, 1999; Okumura and Umenai, 2004), however the present study revealed that prevalence of vitamin prescribing in NGOs was higher than that of UHCs both before and after intervention. The reason might be the absence of 'revolving drug fund' or any other managerial system directed towards improving drug use in the NGOs studied in this present study.

Common clinical conditions for vitamin prescribing as mentioned by the prescribers were inappropriate in two third cases. This reflects that prescribers are unaware about the scientific evidences related to vitamin prescribing. The executed educational intervention leads to reduction in the total number of mentioned indications reflecting improvement in the understanding of prescribers by eliminating the wrong indications from their memory. The increase in the proportion of evidence based indications reveal the fact that prescribers have intention to prescribe on the basis of scientific evidences and are eager to know about their practice.

Vitamin received very little importance in medical curricula, reflected by only one lecture on this issue in Pharmacology. The lack of weight on vitamin also reflected in evaluation, which corresponds with the evidences published earlier (Begum et al., 1999). Though vitamins are taught in different subjects at undergraduate medical courses like Biochemistry, Community Medicine and Internal Medicine, however the pharmacotherapeutic aspects of vitamins required to be known for vitamin prescribing such as pharmacokinetic profile, mechanism of action, indication, dose, duration and adverse effects of vitamins should be taught and evaluated in the course of pharmacology.

This can be stated that lack of adequate emphasis on vitamins in the medical curricula, lack of reliable source of information, dependency on biased and incomplete information provided by the pharmaceuticals, availability of unnecessary and unscientific combination vitamin preparations in the market collectively contributed to make the prescriber vulnerable to prescribe vitamins inappropriately. The success of educational intervention with feedback & reminder rather proved that knowledge deficiency might have played important role in inappropriate prescribing of vitamins.

Anonymous. Cancer and chronic disease in a: A systematic review for a National Institute of Health state-of-the-science conference. Ann Int Med. 2006; 145: 372-85.

Chowdhury AKA, Rahman MS, Faroque ABM. Studying and implementing the monitoring-training-planning strategy to ensure the rational use of injections in the hospitals of the Upazila Health Complexes of Bangladesh. Report of the 2007 Safe Injection Global Network (SIGN) annual meeting. WHO, Geneva, 2007, pp 13-14.

Suryawati S. Using the MTP approach to reduce inappropriate use of antibiotics in hospitals: Results of the field test. Presented in the Second International Conference on Improving Use of Medicine, Chiang Mai, Thailand, April 2004. 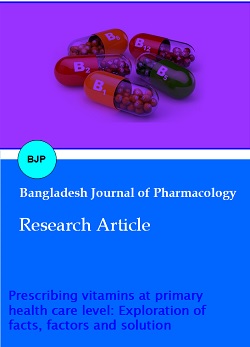