Molecular docking of taraxerol acetate as a new COX inhibitor

Cycloxygenase inhibitors are one of the main class of therapeutic agents for management of inflammation. New COX inhibitors are discovered from natural and synthetic sources. In the current investigation taraxerol acetate have been discovered as a new COX inhibitor. Taraxerol acetate showed considerable inhibitory activity against both COX-1 (IC50: 116.3 ± 0.03 μM) and COX-2 (IC50: 94.7 ± 0.02 μM) enzymes using in vitro enzyme inhibition assay. Molecular docking revealed significant interactions of taraxerol acetate with the important amino acid residues surrounding the inhibitor in binding pocket of COX-2 enzyme. This study indicate potential of taraxerol acetate to be further explored and modified as a new lead compound for better management of inflammatory conditions via targeting COX enzymes.

Cycloxygenases (COX) are involved in biosynthesis of prostaglandins (PGs) as major cytokines playing critical role in inflammations. Compounds with promising potential of COX inhibition can show therapeutic effects in conditions associated with inflammations (Khan et al., 2011). Keeping the background in view, a phytochemical study was conducted to isolate bioactive compounds from Artemisia roxburghiana Besser, with potential therapeutic effect in diseases including inflammation. A. roxburghiana is a perennial aromatic herb belonging to the family Asteraceae.  In Pakistan, where the plant is native and occupying dry open slopes and waste lands of the Himalayan region, various ethnobotanical uses have been reported. These include for treating fever, rheumatism, malaria, dysentery and hepatitis (Dua et al., 2011; Ashraf et al., 2010). The aerial parts are also used to treat diabetes either alone or in combination with other plants such as the dried fruits of Zizyphus jujube (Ashraf et al., 2010). In support of this latter traditional use, the ethanolic extract of A. roxburghiana from Pakistan has previously shown to display insulin secretagogue activity in cultured insulinoma cell line, INS-1 cells (Hussain et al., 2004). Apart from preliminary phytochemical studies such as essential oils analysis by GC-MS (Ashraf et al., 2010; Bicchi et al., 1998). In case of potential active constituents of A. roxburghiana against inflammation no work. In the current investigation we have made a successful effort to identify taraxerol acetate, being the potential chemical constituent, responsible for its reported ethnomedicinal use and pharmacological activity as an anti-inflammatory agent that at least partially targets COX.

The powdered plant materials (17 kg) were extracted 3 times by soaking with 24 L of methanol for two weeks.  Combine extract were filtered and evaporated under reduced pressure to yield 1.5 kg of the crude extract. Preliminary fractionation of the crude extract was done by suspending the crude extract in water and extraction using solvents of increasing polarity: Hexane, chloroform, ethyl acetate and n-butanol. Remaining unfractionated crude extract was taken as aqueous fraction. The ethyl acetate fraction (160 g) that showed the highest PTP1B inhibitory activity was subjected to silica gel column chromatography with hexane containing increasing percentage of ethyl acetate used as eluents. Fractions obtained from the 4.0:6.0 to 0:10 hexane:EtOAc mixtures were further subjected to CC under the same conditions to yield taraxerol acetate (1.71 g, RF 0.75 in hexane:ethyl acetate 0.5:9.5; Figure 1). The structure of isolated compound was confirmed by comparing their corresponding NMR and mass spectral data with those previously reported (Ayatollahi et al., 2011). Tris buffer (50 mM; pH 7.5) was used to dissolve both the enzymes i.e.  COX-1 and COX-2 enzymes (Cayman Chemicals, USA), cofactors adrenaline (5 mM,), and hematin (1 µM). Before this hematin was dissolved in NaOH. This reaction mixture was poured into 96-well plates while the final volume was, 190 µL in each well. Now the same procedure was adopted for the test sample. Different concentrations of taraxerol acetate were diluted in Tris buffer and then put into a 96-well plate, then cofactor and enzyme (10 U/mL; 180 µL) was added to this plate. Before the addition of arachidonic acid these plates were incubated at 37°C for 30 min, followed by the addition of 10 µL of 1M HCl to stop the reaction. Then 10 µL of 1M NaOH was added to adjust the pH to 7.5. The formation of PGE2, a metabolite of PGH2 was measured and from this the enzymes activity and the inhibitory effect of different concentrations of taraxerol acetate was assessed. Radioimmunoassay technique was used for measurement of PGE2 contents. The data was presented as percentage control PGE2 production. All the experiments were performed in triplicate and EZFit Enzyme Kinetics program (Perrella Scientific Inc., USA) was used to determine the IC50 values of test samples as well as of standard sample, while results were expressed as Mean ± SEM.

Ligand file (taraxerol acetate) was designed and optimized using dreading force field was implemented in Marvin Sketch V5.1. Molecular coordinates were further optimized using MMFF force field. FRED 2.1 (Khan et al., 2011) was used to dock the OMEGA pre-generated multi-conformer library. Default FRED protocol was used except for the size of the box defining the binding sites. In an attempt to optimize the docking-scoring performance, exhaustive docking was performed with shapegauss applying the "Optimization" mode. The "Optimization" mode involves a systematic solid body optimization of the top ranked poses from the exhaustive docking. 3 different boxes were explored for COX-2 (PDB ID: 3PGH). Three different simulations were carried out with an added value of 9 Å around the active site. After completion, best scoring pose was selected to study molecular interactions behind significant enzyme inhibitory activity of taraxerol acetate.

Molecular docking simulations were performed using AutoDock 4.2. along with AutoDock tools using Lamarckian genetic algorithm, as reported earlier (Khan et al., 2010). The X-ray coordinates used in the study were based on the inhibition of COX-2 (PDB ID: 3BGP). The standard docking procedure was used for a rigid protein and a flexible ligand whose torsion angles were identified (for 10 independent runs per ligand). A grid of 60 × 60 × 60 points in three dimensions was built, centered on the catalytic pocket of acetylcholinesterase. A grid spacing of 0.375 Å and a distance dependent function of the dielectric constant were used for the calculation of the energetic map. All other parameters were used according to default settings of AutoDock 3.0.5. On successful completion of docking and clustering analysis, pose with the most favorable free energy (binding energy) was selected as a resultant coordinate.

COX-2 is one of the integral enzyme systems, which through biosynthesis of prostaglandins (PGs) initiate inflammatory response. Heme portion is involved in the PGs biosynthesis which is surrounded with in the pocket formed by amino acids residues (Arg120 and Tyr355). These two amino acids have a critical role in designing or virtual screening for discovery of new COX inhibitors. The substrate can only interact with haeme by accessing through the narrow pocket. To validate the accuracy of binding mode and binding affinity flurbiprofen was used as reference and co-crystallized ligand. The binding affinity was determined in terms of binding energy in Kcal/mol. Best scoring conformation of flurbiprofen was found very close to the experimental conformation (RMSD value: 0.453). Figure 3: A closer view of taraxerol acetate inside active site of COX-2 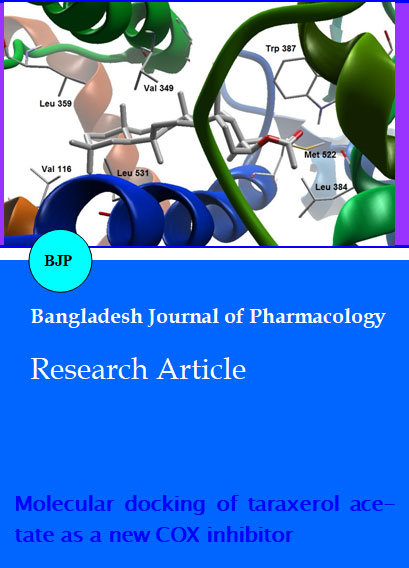