This study was conducted to investigate the diuretic potential of aqueous methanolic extract of Paspalidium flavidum in rats. The extract at doses of 10, 30 50 and 100 mg/kg was administered intraperitoneally in acute diuretic model. Furosemide (10 mg/kg i.p) was used as standard drug. Total urine volume and urinary excretion of electrolytes were measured. Preliminary phytochemical tests were also performed using standard procedures. The extract exhibiteda significant dose-dependent diuretic effect at all the doses when compared to control group. Urinary excretion of sodium was significantly increased by the extract while a significant increase in potassium excretion was only observed at higher doses. Phytochemical analysis illustrated that the extract contained compounds such as alkaloids, saponins, tannins, flavonoids, cardiac glycosides and reducing sugars. It is conceivable therefore that the aqueous methanolic extract of P. flavidum contain certain biologically active compounds that might be responsible for the diuretic activity.

Diuretics are the drugs that promote urine production, sodium excretion and adjust volume of body fluids in various clinical situations. They have been considered an effective treatment for diseases like hypertension, cardiac failure, nephritic syndrome and pulmonary edema (Devi et al., 2010). Historically, these agents have been classified on a variety of on potassium excretion (potassium sparring diuretics; Katzung, 2003).

Despite the abundance of these synthetic drugs, a significant proportion of the population of developing countries depends on traditional ideas such as efficiency (high ceiling diuretics), place of action (loop diuretics), structure (thiazide diuretics) and effects medicines for their health related needs. This is due to the fact that the efficacy of the modern synthetic drugs has been only 60%, and generally a combination of these drugs is required to achieve optimal therapeutic outcomes. Moreover, side effects from these medications have also raised serious medical concerns (Du and Chen, 2005). According to WHO, about 60% of the population in developed countries rely on traditional herbal medicine, and the percentage is much higher in the developing world (WHO, 2000).

Paspalidium flavidum L. (Family:Poaceae) is a plant indigenous to Pakistan, which has been used to treat diseases such as skin, eyes, teeth, liver and heart disorders (Hussain et al., 2010). At present, there was no scientific study available on the diuretic activity of this plant; hence this study was aimed at exploring the therapeutic potential of aqueous methanolic extract of P. flavidum in diuresis.

flavidum was collected from a garden in Jauharabad; District Punjab, Pakistan during the month of August, 2010. The plant was identified and authenticated by Haider Ali Shakir (Assistant Director, Soil conservation). A voucher specimen (No. UOS-FP-25) has been deposited in the herbarium of Faculty of Pharmacy, University of Sargodha. Aqueous methanolic (70:30) extract of P. flavidum (whole plant) was prepared using cold maceration process (Yuchi et al., 2012). The extract was then air-dried to obtain a solid mass of percentage yield (16%).

Both male and female Wistar rats weighing 250-350 g were used for the study. All the animals were housed in controlled environment (23-25°C) and treated in accordance with National Institute of Health (Pakistan) guidelines. The study protocol was approved by the local ethical committee of Faculty of Pharmacy, University of Sargodha.

Rats of either sex weighing (250-350 g) were assigned into six groups (n = 6). Group I served as control and received normal saline (10 mL/kg). The animals in group II were treated with furosemide (10 mg/kg) that served as standard group. Group III and IV received 10 and 30 mg/kg of aqueous methanolic extract of P. flavidum respectively. Animals in Group V and VI were treated with 50 and 100 mg/kg of the extract respectively. The animals were fasted overnight (16 hours) prior to the test but with free excess to water only. Briefly, after administration of various doses of the extract by intraperitoneal route, animals in each of these groups were placed in metabolic cages for 6 hours at a temperature of 25 ± 0.5 ºC. Volume of urine collected in diuretic chamber was measured after every hour for 6 consecutive hours. Then total volume of urine (mL) in 6 hours was calculated. Finally, urine volume was expressed as mL/100 g body weight. Urinary electrolytes concentration (Na+ and K+) were measured by flame photometer from the freshly obtained urine. Diuretic action and diuretic activity were also determined using formula: Diuretic action = urine volume of treated group/urine volume of control group; Diuretic activity = diuretic action of treated group/diuretic action of standard group (Patel et al., 2010).

The aqueous methanolic extract of P. flavidum produced a significant dose-dependent increase in total urine volume when compared to control. A highly significant (p<0.001) diuretic effect was observed at doses from 30 to 50 mg/kg. The maximum increase in urine output was observed at 100 mg/kg. Diuretic effect of the extract at 100 mg/kg was comparable to that of furosemide (Table I).

The extract also demonstrated a significant increase in sodium excretion in comparison to control group. An increase (p<0.05) in urinary excretion of potassium was observed only at doses of 50 and 100 mg/kg (Table II).

Medicinal plants have always been a major target for drug development. P. flavidum, a plant native to Pakistan has been used as a diuretic to treat hypertension and other cardiovascular diseases but no pharmacological study has been carried out to test the diuretic activity of this plant. The aqueous methanolic extract of P. flavidum was therefore evaluated for a detailed diuretic study. It is noteworthy that the extract produced a significant dose dependent diuretic effect in comparison to control. Moreover, the extract also exhibited an increase in sodium and potassium excretion when compared to control.

that cardiac glycosides and tannins are endowed with both diuretic and vasodilator actions (Herrera et al., 2008). It has also been reported that saponins in association with compounds such as steroids, vitamin-D and cardiac glycosides produced diuretic response. Similarly, the flavonoids also appeared to exhibit diuretic, anti-inflammatory, and vasoprotective effects by the inhibition of arachidonic acid metabolism (Mythreyi et al., 2008). Therefore, it may be suggested that diuretic effects of the aqueous methanolic extract of P. flavidum might be due to the presence of these substances which may act individually or in combination.

Previously it has been well established that increased regional blood flow, vasodilation or an inhibition of tubular secretion contributes to an increased urinary excretion (Stanic and Samarzija, 1993; Pantoja et al., 1991). Hence, any of these processes could be associated with diuretic effect of the extract. Furthermore, an increase in sodium and potassium excretion by the extract might also be involved in diuresis.

The aqueous methanolic extract of P. flavidum contain certain active compounds that may be responsible for the diuretic activity. Therefore, further studies are required to isolate these pharmacologically active principles and to determine their exact mechanism of action.

WHO. Guidelines for levels and kinds of evidence to support claims for therapeutic goods, In: General guidelines for methodologies on research and evaluation of traditional medicine. World Health Organization, Geneva, WHO Press, 2000, p 41. 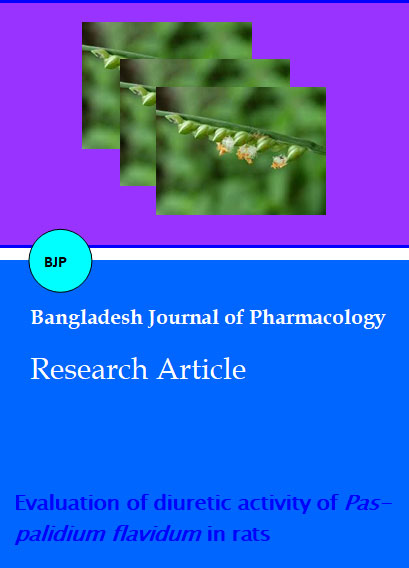