Type 2 or non insulin dependent diabetes account for about 95% of all diagnosed cases of diabetes mellitus, and  has a significant impact on the health, excellence and expectancy of life (Dewanjee et al., 2009). Though several oral hypoglycemic agents are available, but most of these drugs possess different side effects. Thus, the hunt for a new therapeutic agent devoid of adverse effect originating from plants would be of interest (Kannur et al., 2006). Meyna spinosa Roxb. (Rubiaceae) has been used in the treatment of hepatic disorder, gastrointestinal problems, skin infection, and as refrigerant, and abortifacient (Bora and Kumar, 2003; Dea et al., 2009; Mitra and Mukherjee, 2009). The boiled fruit extract is used to treat diabetes in Manipur, while fruit and leaf juice are recommended to cure diabetes by the tribes of Tripura, India (Khan and Yadava, 2010; Sen et al., 2011). Scientific literature suggests that M. spinosa fruits extracts possess antimicrobial activity (Buragohain, 2008). Methanol extract of M. spinosa also possess antifungal activity (Goswami et al., 2006). The present study aim to investigate the in vivo antidiabetic, hypolipedemic potential of fractions of Meyna spinosa leaf against high fat diet-alloxan induced type 2 diabetes.

Preparation of extract and fractionation

Healthy Albino mice (20-30 g) were used for acute toxicity study and Wistar rats (150-200 g) were used for the antidiabetic activity. Animals were maintained under controlled environmental conditions. The study was approved by the Institutional Animal Ethical Committee (Reg. No. 1305/ac/09/CPCSEA).

The fixed dose (OCED Guideline no. 423, Annexure 2d) method of Committee for the Purpose of Control and Supervision of Experiments on Animals (CPCSEA) was used for toxicity studies. The tested fractions were administrated orally.

To access the effect of fractions on combined NG-OGTT model, blood samples were collected from overnight fasted rats, followed by the administration of vehicle, glibenclimide (5 mg/kg), MFMS, EFMS, and PFMS at a dose of 75 and 150 mg/kg, p.o. Serum glucose level was determined after ½, 1, and 2 hours after drug administration. The rats were orally loaded with 2 g/kg glucose after the last measurement (at 2 hours) and the serum glucose levels were continued to determine after 2½, 3, 4 and 6 hours by using a commercially available kit (Agapee Diagnostic Ltd, Kerala) (Orhan et al., 2005).

High fat diet was administered continuously for 10 days to healthy rats. On 11th day freshly prepared alloxan solution in physiological saline (120 mg/kg) injected into the caudal vein of overnight fasted rats. Fifteen minute later 0.4 U insulin was injected (i.p.); 2.5 and 5.0 hours later, 25% glucose (10 mL/kg, p.o.) administered to decrease animal mortality rate caused by the hypoglycemia and hyperglycemia in rats with injection of alloxan. Twenty four hour after first alloxan injection, alloxan (100 mg/kg body weight) was injected again into the caudal vein of rats. Insulin (0.4 U) was intraperitoneally injected 15 min later to rats, then 25% glucose (10 mL/kg) given orally 2.5 and 5.0 hours later respectively. The blood glucose was tested and animals with fasting blood glucose more than 200 mg/dL were used for the experiments (Shu et al., 2009).

Antidiabetic and hypolipedemic evaluation of fractions

Results are expressed as mean ± SEM, (n = 6). Statistical difference was tested by using one-way analysis of variance (ANOVA) followed by Tukey tests. A level of p<0.05 was used as the criterion for statistical significance.

Fractions did not show any mortality at the dose of 2,000 mg/kg. Therefore, 2000 mg/kg dose was considered as ALD50 cut off the dose under Globally Harmonised Classification System (GHS) category 5 (safe dose).

Table I: Effects of the M. spinosa fractions on blood glucose levels in normal and glucose-loaded hyperglycaemic rats

A significant decrease in serum TG, TC, LDL and VLDL levels, and increase in HDL level were observed after the treatment with glibenclamide, MFMS, and EFMS.

Despite the fact that substantial progress has been made in the management of diabetes mellitus, but the search for plant based products mainly from folk/traditional medicinal system for the control of diabetes mellitus continues with great expectation (Kannur et al., 2006). Oral glucose tolerance test is acknowledged for indirect assessment of in vivo peripheral insulin action and insulin resistance (Liou et al., 2002). Fractions did not have any effect on normal animal, but prevent drastic increase in serum glucose level after glucose administered. Hence the fraction may have the potential to improve insulin sensitivity.

Alloxan has been observed to cause necrosis of β-cells and induce hyperglycemia. Intraperitoneal injection of alloxan after administration of high fat diet causes type 2 diabetes (Shu et al., 2009). MFMS, EFMS significantly decreased the fasting serum glucose in diabetic animals. Alloxan causes characteristic loss in body weight in diabetic rats which is due to improved muscle wasting and due to loss of tissue protein (Nammi et al., 2003; Jain et al., 2010), and a similar phenomenon was observed in the present study also. Treatment with MFMS and EFMS was found effective, which may due to the protective effect of fractions in controlling muscle wasting, i.e. reversal of gluconeogenesis and may also be due to proper glycemic control of fractions may responsible for this effect.

The sulphonylureas cause hypoglycaemia by increasing the secretion of insulin and mainly active in mild alloxan-induced diabetes (Al-Shamaony et al., 1994). Fractions of M. spinosa had similar activity like that of glibenclamide in diabetic rats which could be due to improving the metabolism of glucose, and increasing insulin secretion from the β-cells.

Marked increase in TG, TC, LDL, and VLDL in diabetic rats was observed. The most frequent lipid abnormalities in diabetes are hypertriglyceridemia and hypercholesterolemia (Al-Shamaony et al., 1994; Shirwaikar et al., 2005). Hypertriglyceridemia is coupled with metabolic consequences of hypercoagulability, hyperinsulinemia, insulin resistance and insulin intolerance (Shirwaikar et al., 2005). In our study, administration of MFMS and EFMS significantly (p<0.05) improved these parameters. Decreased of cholesterogenesis and fatty acid synthesis may responsible for the observed hypolipidemic effect. Significant lowering of TC, LDL and raise in HDL is a very enviable biochemical state for avoidance of atherosclerosis and ischemic conditions (Shirwaikar et al., 2005; Akpan et al., 2012). The result indicated fractions have the potential to prevent or treat the complications of diabetes. The acini produce α-amylase enzyme that involved in the digestion of polysaccharide in diet. Diabetic cause damage to acini cells results leakage of the enzyme into blood (Akpan et al., 2012). MFMS and EFMS may prevent cellular damage thus decrease the enzyme level in serum. Preliminary phytochemical analysis suggested that methanol extract contain alkaloids, glycosides, triterpenoids, tannins and flavonoids. Therefore, presence of any of these compounds in fraction may be responsible for observed biological activities. These statistical data indicated MFMS possess highest hypoglycemic effect is likely due to the increase in insulin secretion or ameliorating insulin sensitivity or due to the inhibition of α amylase  activity. 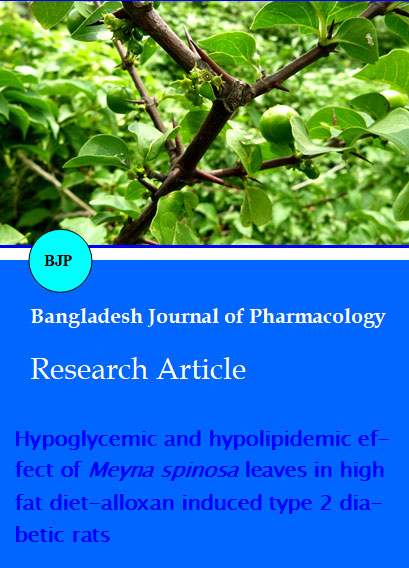