The antipyretic effect of the hydro-methanol extract of Melia azedarach leaves was investigated using the yeast induced pyrexia method in rabbits. Paracetamol was used as a positive control and negative control group received distilled water. Rectal temperatures of all rabbits were recorded immediately before the administration of the extract or vehical or paracetamol and again at 1 hour interval for 6 hours using digital thermometer. The extract was also phytochemically screened for alkaloids, tannins, saponins, flavonoids, cardiac glycosides and phenols. At 500 mg/kg dose the extract showed significant (p<0.0001) reduction in yeast-induced elevated temperature as compared with that of standard drug paracetamol whereas the extract dose 250 mg/kg was less effective when compared with higher dose (p<0.05). Phytochemical screening showed the presence of alkaloids, tannins, flavonoids, saponins and phenols. This study showed that the hydro-methanol extract of M. azedarach leaves at a dose of 500 mg/kg possesses significant antipyretic effect against the yeast-induced elevated temperature.

Melia azedarach L. (Meliaceae) (Local name: Bakain) is a useful traditional medicinal plant like Azadirachta indica (A. indica) (Local name: Neem) from family Meliaceae. Each part of the M. azedarach has some medicinal properties similar to A. indica and thus is commercially exploitable. During the twenty year considerable progress has been achieved regarding the chemistry of the plant, biological activity and medicinal applications of M. azedarach (Khan et al., 2008).

Animals used: In this study adult healthy rabbits weighing 1,000-1,200 g of either sex were obtained from laboratory animal center, The Islamia University Bahawalpur. All the animals were maintained in air conditioned animal house located in the faculty of Pharmacy and Alternative Medicine, The Islamia University Bahawalpur. They were fed with standard pellet diet. The animals were acclimatized in an environment of controlled temperature 22-25°C and 12 hours light/dark cycle for five days prior to study. All the animals were fasted one hour before drug treatment. Food and water were continued after the administration of drug.

Preparation of extract: The fresh green leaves of M. azedarach were separated and cleaned and  washed with distilled water and dried under shade at temperature between 21-30°C for 30 days. 1,000 g of powdered material of M. azedarach leaves was taken in beaker having 5 L capacities and 2 L of 70% methanol was added, soaked for 72 hours with occasional shaking and stirring. The residues were extracted thrice with the same fresh solvent and extract combined. The soaked material of plant was filtered through several layers of muslin cloth one by one for coarse filtration. The filtrate was filtered through a Whatman # 1 filter paper. The filtered extracts were concentrated under reduced pressure at 40°C, in rotary evaporator. The semi-solid mass was obtained and was weighed to calculate the yield, which was 29.4% (w/w) and stored in a refrigerator (-8°C), until used for analysis.

Antipyretic activity (yeast-induced pyrexia method): Antipyretic activity was performed by slightly modifying the method described by (Bose et al., 2007). Rabbits of either sex weighing 1,000-1,200 g were divided into four groups of six rabbits in each group. The rectal temperature of all the rabbits was measured with digital thermometer before the administration of yeast suspension. Pyrexia was induced by subcutaneously injecting 3 mL/kg/body weight of 10%w/v yeast suspension in the back of the rabbits. After the 18 hours, of the administration of yeast suspension temperature was measured. The rabbits showed 0.5 to 1.5°C increase in temperature were selected for the study. Group I is negative control and received distilled water. Paracetamol at a dose of 150 mg/kg body weight was given orally to positive control Group II. Plant extract at a dose of 250 and 500 mg/kg body weight were administered to group III and group IV respectively. The rectal temperature was recorded at the interval of one hour for 6 hours.

Statistical analysis: The data obtained were analyzed statistically using SPSS17.0. The tool used for this purpose was one-way analysis of Variance (ANOVA) followed by LSD post-hoc test for multiple comparisons. Fever or pyrexia is a complex physiologic process characterized by elevated body temperature above normal range. Body temperature is regulated by a temperature regulating centre present in the hypothalamus. Hypothalamus ensures a balance between heat loss and heat production. Fever happens when there is the disturbance of this regulatory centre that leads to the set point of body temperature being raised (Rang et al., 1992).

When any pyrogen is injected into the hypothalamus of the experimental animals, fever which is not blocked by systemic salicylates, develops within a few minutes of administration of nanogram amount (Milton and Wendlandt, 1971) in their report proposed that prostaglandin acts as a molecular transmitter of pyrogenic stimuli in the hypothalamus. Abramson and Weissmann (1989) and Coelho et al. (1995) therefore proposed that nonsteroidal anti-inflammatory drugs and glucocorticoids, reduce the elevated temperature during febrile response by inhibiting the biosynthesis of prostaglandins and inhibition of plasma prostaglandin level. Their findings therefore confirmed the earlier views of Milton and Wendlandt, 1971.

Non-steroidal anti-inflammatory drugs NSAIDs like acetylsalicylic acid exert their antipyretic action by inhibiting prostaglandin synthesis (E-type) in the hypothalamus (Rang et al., 1992). As a result elevated plasma prostaglandin level, as observed in fever is suppressed. Paracetamol, the reference antipyretic drug used in this study also has same effect by a selective action on a specific cyclooxygenase (COX) iso enzyme in the CNS (Flower and Vane, 1972).

The hydro-methanol leaf extract of M. azedarach demonstrated marked antipyretic activity as evident in the inhibition of temperature elevation in the yeast model. Therefore, the antipyretic action of extract may be, due to the inhibition of prostaglandin synthesis, leading to the suppression of elevated plasma level, especially since the extract had been shown to possess anti-inflammatory activities (Sidhaye et al., 2011).

The result of phytochemical screening of hydro-methanol extract of M. azedarach leaves showed that it contains tannins, alkaloids, flavonids, phenols and saponins while extract is negative for cardiac glycosides. It is shown by the previous studies of phytochemical analysis of different parts of M. azedarach that plant contains 96 terpenoids and limonoids; 5 flavonoids; 14 steroids; 7 carboxylic acid and 3 antharaquiones (Kumar et al., 2003).

Preliminary phytochemical study indicated that extract contains alkaloids, tannins, flavonoids, phenolic compounds and any one of  which may be responsible for the antipyretic activity of these plants. Alkaloids like bolidine have the ability to reduce the elevated temperature by inhibiting the prostaglandin E2 synthesis (Backhouse et al., 1994). Similarly, flavonoids like baicalin possess antipyretic effect by suppressing TNF-α (Chang et al., 2007). One of the compounds pyrozol-5(2H)-one (0.26%-flavonoids) isolated M. azedarach leaves possessed wide spectrum of biological activities such as anti-inflammatory, antipyretic and analgesic (Sidhaye et al., 2011). Therefore, antipyretic activity might be due to the flavonoids and or the alkaloidal components of the plants extracts.

The authors are thankful to the Dean and the Chairman of the University College of Conventional Medicine, Faculty of Pharmacy and Alternative Medicine, The Islamia University of Bahawalpur for providing support and necessary facilities to carry out this work successfully.

Milton AS, Wendlandt S. Effects on body temperature of prostaglandins of A, E and F series on injection in to the third ventricle of an anaesthetized cats and rabbits. J Physiol. 1971; 218: 325-36. 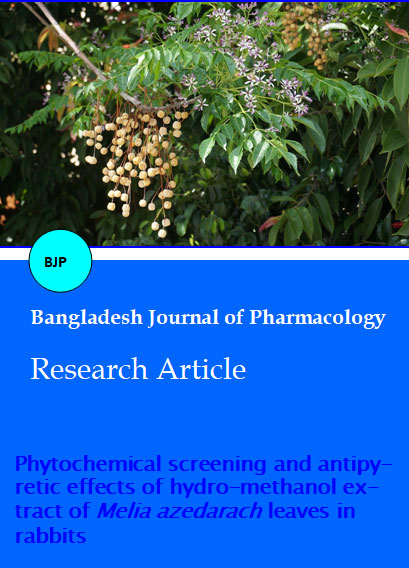