The aim of this study was to evaluate the diuretic activity of aqueous extract of Verbesina crocata at different doses in rat. The aqueous extract (100 and 400 mg/kg for decoction; 200 and 400 mg/kg for smoothie form), furosemide (4 mg/kg and vehicle were administered per os to rat. After 6 hours in metabolic cages, the urinary flow, glomerular ﬁltration rate and electrolyte balance (Na+ and K+) were assessed. All doses produced an increment of urinary flow and Na+/K+ excretion. Glomerular filtration rate was incremented only on smoothie form at 400 mg/kg. These findings provide a basis explaining the traditional folk medicine use of this plant as a diuretic agent.

Diuretic is prescribed to increase the sodium and water excretion in the treatment of disorders such as edematous states (congestive heart failure, hepatic cirrhosis and nephritic syndrome) and hypertension. Conventional widely used diuretic like furosemide or thiazides, has been associated with several adverse effects, such as electrolytic imbalance, glomerular impairment, stimulation of renin-angiotensin system, etc. (Gupta and Neyses, 2005; Morganti, 2005).

Verbesina crocata (Cav.) Less. is an endemic plant traditionally used in Tequesquitengo, State of Morelos, Mexico, commonly known as “capitaneja”. It has long been used in traditional medicine like decoction or smoothie form mainly to treat kidney diseases, as diuretic agent, and other ailments such as diabetes (Pérez et al., 1984). Now-a-days, there is not enough information about pharmacological effect of this plant, on renal diseases. Thus, this study was aimed to assess the possible diuretic effect of the aqueous extracts of V. crocata in order to verify its ethnomedicinal use in an experimental model of diuresis.

V. crocata was collected in Tequesquitengo (18° 37′ 0″ N 99° 16′ 0″ O), State of Morelos, Mexico in January 2012. The botanical identification and authentication of the plant samples were performed by the Biologist Laura Doval Ugalde at the Escuela Nacional de Ciencias Biológicas, Instituto Politécnico Nacional. The plant samples were compared with a voucher specimen deposited in the ENCB herbarium under number 2405. The aerial part of plant was divided in two portions, the first one was dried at room temperature and other part was used fresh.

A survey was carried out around Tequesquitengo, State of Morelos using a questionnaire to interview 100 individuals with knowledge on the subject matter as herb seller, traditional medical healers and consumers about the part of plant and the usefulness of V. crocata in ethnomedicine. A specimen of the plant was shown to people at the time of the interview to avoid confusion (Pablo-Pérez et al., 2016).

Preparation of the aqueous extract and smoothie of the plant

Two types of extracts from the aerial part of V. crocata were prepared, one from the dry plant and the other from the fresh plant. For decoction, the plant was air-dried at room temperature in the shade, and then was cut into small pieces. The extract was freshly prepared just before administration as follows: 2 g of the plant were placed in water, the mixture was boiled at 100°C for 5 min and subsequently filtered. On the other hand, the smoothie was performed with 1.2 g of fresh plant and blended with water until the mixture was homogeneous. All doses of extract used were calculated respect to the weight of starting dry or wet material.

The secondary metabolites of the aqueous extract of V. crocata were detected by qualitative chemical reactions. Briefly, Dragendorff, Mayer, Sonnenschain and Wagner reactions were used to identify alkaloids, Fehling and Benedict reactions for reductor sugar, Erlich reaction and observation under UV light of alkalinized extracts for coumarins, Kedde, Legal´s and Baljet´s reactions for cardiac glycosides, a frothing test for saponins. The tannins were identified by FeCl3 test and jelly reagent. Liebermann-Buchard reaction for triterpenoids and steroids. Bornträger reaction for quinones and Shinoda reaction for flavonoids were used among others (Saleem et al., 2015; Pablo-Pérez et al., 2018).

Reagent-grade reagents were used. Furosemide, a high-ceiling loop diuretic, was used as reference diuretic drug (Lasix®, vial 20 mg/mL). It was dissolved in water prior to administration.

Diuretic activity of the aqueous extract of V. crocata

For the evaluation of diuretic activity, the animals were carried out in unanesthetized and randomly allocated to 6 groups: Control group received vehicle (water, 1 mL/kg), furosemide-treated group (4 mg/kg) and the other four groups were treated with the aqueous extract from V. crocata at the doses of 100 and 400 mg/kg for decoction and 200 and 400 mg/kg for smoothie form. In all groups, the administration was per os and there were at least six animals per group.

At the beginning of the experiment, the urinary bladder was emptied by gentle compression of the abdomen, as previously described (Meléndez et al., 2004). Once the bladder was emptied, either the vehicle, furosemide or aqueous extract was administered. The animals were kept during 6 hours in individual metabolic cages in a quiet and warm environment (21–23°C) under fluid and food deprivation. At the end of this period, the sample of urine was obtained; also by abdomen compression to ensure complete emptiness of the bladder and urine volume was measured. The animals were decapitated and blood samples were obtained.

Glomerular ﬁltration rate was estimated by the clearance of endogenous creatinine. To avoid the error due to tubular secretion of creatinine, only female animals were used. Plasma and urinary creatinine were determined by the Jaffe alkaline picrate modified method (Meléndez et al., 2004). Creatinine clearance and fractional excretion of sodium and potassium were calculated using the conventional equations (1 and 2):

To study the effect of aqueous extract from V. crocata, sodium and potassium concentrations were measured in the urine and plasma samples by Flame photometer (Corning 400, Corning Medical and Scientiﬁc, England). The instrument was calibrated with standard solutions of Na+ and K+. Urinary excretions and clearances of sodium and potassium were calculated (Estévez-Carmona et al., 2013).

The content of Na+ and K+ were determined in both extracts for each 100 mg of plant material following the previous procedure.

Among the five groups of mice, one as a control and the rest four groups treated with different doses of aqueous extract (2, 4, 8 and 16 g/kg of body weight) with at least 4 animals per group. The mice had access to food and water ad libitum and they were observed for number of deaths, clinical signs and behaviour changes during the first 3 hours following per os administration. Lethality was assessed using death within 14 days as an index of toxicity (Hilaly et al., 2004; Mukinda and Eagles, 2010; Pablo-Pérez et al., 2018).

According to interviewed people, V. crocata is used specially to treat kidney diseases as pain and kidney infection (46%), urolithiasis (14%), anuria and oliguria (38%). The majority of the remedies in the study area were prepared from dried form (50%) followed by fresh parts (33%), especially as smoothie of this plant and (17%) prepared as infusion.

The doses of aqueous extract produced a slight increase (p˂0.05) in the urine flow compared with the control group remaining, but this variable did not reach the value produced by the reference diuretic drug. The increment on urine flow does not depend on the dose administered (Figure 1). Glomerular filtration rate was not affected by decoction treatment, however at dose of 400 mg/kg of smoothie of plant there was an increment of this variable (Table I).

Table I: Effect of V. crocata on glomerular filtration and sodium and potassium excretion None of the doses of aqueous extract produced mortality or any behavioural disorders in animals. Because no deaths were observed at the dose levels used, the LD50 was assumed greater than 16 g/kg.

Decoction and smoothie forms of V. crocata induced diuretic effect in rat, which is reflected in the increase in urinary flow and electrolytic excretion similar to furosemide group.

Since no conclusion could be drawn from the present work about the mechanism of action of the extract, and although evidence of diuretic efficacy of the plant tested have been obtained, further investigations are necessary to determine the precise mechanism by which the extract affect diuresis and electrolyte urinary excretion. Although the mechanism of action of the diuretic effect of aqueous extracts is unknown, it is possible that preparations of V. crocata exerted its pharmacological activity by inhibiting tubular reabsorption of water and accompanying anions, as such action has been hypothesized for some tested plants in previous reports (Jouad et al., 2001; Adam et al., 2009).

Increased urinary excretion of sodium and potassium could not be due to electrolytes present in V. crocata because of the low concentration of  eletrolytes present in this plant. The pharmacodynamics studies on medicinal plants stressed that there is often no correlation between the diuretic effect observed and the content of K+ in the extract (Galati et al., 2002). The potassium loss that occurs with many diuretics may lead to hypokalaemia. For this reason, generally potassium-sparing diuretics are recommended (Meera et al., 2009). In this work, only the groups treated with smoothie had an important excretion of potassium, although, the loss of K+ is not beneficial during medical therapies, it should be compensated with potassium supplements or a diet rich in this mineral.

The fact that there is not any report on the chemical composition of the studied specie it was required phytochemical screening that allows identifying the main chemical groups present in the plant. The active principles responsible for the diuretic effects of the extracts of this plant have not yet been elucidated but preliminary phytochemical screening of the extracts revealed the presence of alkaloids, saponins, quinones and tannins.

Previous reports have reported that the diuretic activity is related to plants rich in alkaloids and saponins (Khan et al., 2010; Lahlou et al., 2007), in the case of saponins, depending on their chemical structures, they are known to have various physiological activities such as hemolytic properties, alteration of membrane permeability and the modulation of renal sodium excretion (Amuthan et al., 2012). It is probable that constituents of the aqueous extract of V. crocata, could be acting individually or in synergism with other molecules to produce the diuretic effect reported in this work.

The observed effect does not exclude the possibility that the changes in urine output may occur as a result of the presence of the chemicals identified in the phytochemical screening. Also, do not rule out the idea that the extract may exert a possible effect against diseases whose etiology is direct to the structural components of the kidney.

In the toxicological evaluation, this plant did not show any toxic effects at the doses evaluated in this study. With the non-toxic data and the encouraging results obtained in diuretic study, it is possible to consider that the V. crocata aqueous extract could be a safe drug in used doses.

This study supports the ethnomedical use of V. crocata as a diuretic agent and the plant extracts do not seem to have toxicity per os at the doses studied.

Meléndez CME, Berdeja B, Miranda G. Diuretic effect of the aqueous extract of Bidens odorata in the rat. J Ethnopharmacol. 2004; 95: 363-66.

Morganti A. Should a diuretic always be the first choice in patients with essential hypertension? The case for no. J Am Soc Nephrol. 2005; 16: S70-73. 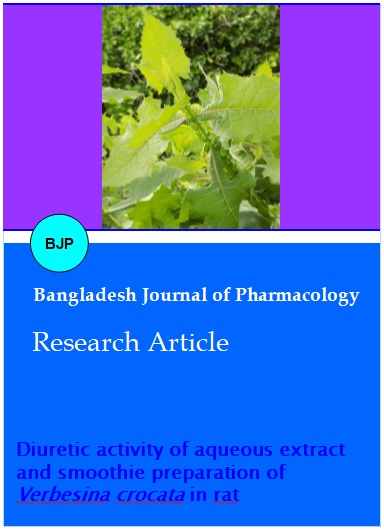