Preparation of procyanidin B2 from apple pomace and its inhibitory effect on the expression of cyclooxygenase-2 in lipopolysaccharide-treated RAW264.7 macrophages

Dimeric procyanidin B2 (PB2) is one of phenolic compounds in apple pomace, an agro-industrial byproduct in apple juice processing. This work focused on purification of PB2 from apple pomace using sephadex column chromatography and its potential effect on lipopolysaccharide (LPS)-induced inflammation using RAW264.7 macrophages. PB2 with the purity of 72.3 ± 1.9% was successfully afforded using resin and gel column chromatographic technique. Anti-inflammatory tests suggested that the expression of cyclooxygenase-2 (COX-2) in LPS-induced murine RAW264.7 macrophages was suppressed in a PB2 concentration-dependent manner. PB2 at no less than 50 μg·mL-1 could significantly suppress inflammation in the LPS-induced cells. Moreover, this suppressive effect was not correlated with PB2 pretreating. However, the COX-2 expression was not reduced in LPS pretreatment way followed by PB2 exposure, which suggested that PB2 has no repairing function. The results showed that high pure PB2 prepared from apple pomace has a remarkable anti-inflammatory property.

China is one of the largest exporters of concentrated apple juice. However, over 3 million tons of apple pomace is yearly generated from juice processing factory. How to deal with this argo-byproduct has become an important environmental problem. Many papers had reported that apple pomace contains a variety of bioactive compounds including polyphenols, composed of primarily monomeric flavanols (-)-epicatechin and (+)-catechin, and oligomeric procyanidins formed from these monomeric units, such as dimeric procyanidin B2 (PB2) (Figure 1) (García et al., 2009; Suarez et al., 2010; Vendruscolo et al., 2008). Pharmacological tests had shown that PB2 has a broad spectrum of bioactivities, such as anti-inflammation, anti-tumor, antioxidant activity (Miura et al., 2008; Sakano et al., 2005; Zhang et al., 2006). In our previous study, polyphenolsenriched extract from apple pomace was subjected to fractionation using macroporous absorbent resin XAD-16 and one fraction APIII was found to have the highest content of PB2 (22.5 ± 1.2%). Figure 1: The chemical structure of procyanidin B2 (PB2)

Cyclooxygenase (COX), the key protein that catalyzes the rate-limiting step in prostaglandin biosynthesis, exists in at least two isoforms, designated as COX-1 and 2. Although these proteins share considerable sequence homology, these isoforms differ considerably in the tissue distribution, regulation, and function (Kim et al., 2007; Wu et al., 2010). COX-1 is a housekeeping protein, being constitutively expressed in almost all mammalian tissues. In contrast, COX-2 is barely detectable under normal physiological conditions. However, like other early-response gene products, COX-2 can be induced rapidly and transiently by pro-inflammatory mediators and mitogenic stimuli, including cytokines, endotoxins, growth factors, oncogenes, and phorbol esters. So, COX-2 has received considerable attention for its potential role in the inflammation and disease development and is recognized as a potential therapeutic target for the prevention and treatment of a number of diseases (Fujiwara and Kobayashi, 2005).

In this work, we investigated inhibitory effect of PB2 purified from apple pomace on COX-2 expression induced by the endotoxin lipopolysaccharide (LPS) at different concentration and time. Furthermore, the repairing function of PB2 was also studied through reverse pretreatment.

Fresh apple pomace was obtained from Shaanxi Hengxing Fruit Juice Co., Ltd, the largest manufacturer of apple juice concentrate in China. About 100 g dried apple pomace was extracted with aqueous alcohol according to a previous published protocol (Bai et al., 2010). The afforded extract was concentrated under reduced pressure (Eyela NC-2000, Japan) and lyophilized (Freezone 2.5 plus, USA). After resolving in 200 mL of 20% ethanol solution, the resulting extract was centrifuged for 15 min at 10,000 rpm (CR21GII, Hitachi Koki Co., Ltd., Japan), and preserved at 4°C.

200 mL of polyphenol-enriched extract was retained on 100 mL macroporous adsorbent resin XAD-16 (Rohm and Haas, USA) and packed into a normal atmosphere column (300 × 30 mm). The extract were gradually eluted with three bed volumes of distilled water and aqueous alcohol, which concentrations were 20, 40, 60, 80 and 100%, respectively. Six collected fractions, respectively named as API, APII, APIII, APIV, APV and APVI, were concentrated, free-dried and preserved at -18°C until further purification with gel filtration. Preliminary HPLC analysis showed that fraction APIII had the highest content of PB2 (22.5 ± 1.2%).

About 1 g of fraction APIII was dissolved in 4 mL enthanol and centrifuged at 10,000 rpm for 10 min. Then the supernatant was subjected to gel filtration on a glass column (600 × 30 mm) with Sephadex LH-20 (Phamacia Co., Sweden). During the purification process, one subfraction was collected and lyophilized. HPLC analysis of the subfraction was carried out on an Agilent 1200 series liquid chromatograph (Agilent Co., USA)/a diode array detector equipped with a reversed-phase Sunfire C8 (250 × 4.6 mm ID, 5 μm) (Waters Co., USA). Wavelength monitoring was performed at 280 nm. The eluting solvents consisted of 70% aqueous 0.1% acetic acid (solvent A) and 30%acetonitrile (solvent B). All solvents were filtered with a 0.5 μm membrane filter before HPLC analysis. Column oven and flow-rate were respectively set at 25°C, 1.0 mL/min, and the injection volume was 10 μL. Quantification of PB2 was done by the external standard method.

The mouse macrophage cell line RAW 264.7 was obtained from Cell Storehouse of Chinese Academy of Science (Shanghai, China) and grown in Dulbecco’s modified Eagle’s medium supplemented with 10% fetal bovine serum and 100 units/mL penicillin/streptomycin sulfate. The cells incubated in a humidified incubator with 5% CO2 atmosphere at 37 °C were fed with fresh medium every 2 days and subcultured when they reached a confluence of 80%.

Murine RAW 264.7 macrophage cells were grown and subcultured when they reached a confluence of 80%. Testing samples were prepared using preparative PB2 and DMSO, including 1, 10, 50 and 100 μg/mL. In order to assay anti-inflammatory activity, the cells were pretreated with different concentration PB2 for 4 hours and subsequently with 1 μg/mL LPS for 20 hours. Meanwhile, effects of pretreating time from 2 to 24 hours on COX-2 expression in LPS-induced cells were also evaluated. The cells in the blank control group were left untreated and the others in the LPS group were treated with LPS.

Previous tests suggested that PB2 has inhibitory effect on COX-2 protein expression in LPS-induced RAW-264.7 cells. However, there is no report on whether PB2 has repairing function or not when inflammation developed in the LPS-induced cells so far. So, investigation on effects of PB2 derived from apple pomace on COX-2 expression in reverse pretreating way was carried out in this work, which the cells were pretreated with LPS followed by PB2.

After incubation, mouse macrophage cell line RAW 264.7 was harvested using a cell scraper and lysed in lysis buffer [20 mM Tris (pH 7.4), 5 mM EDTA, 0.1% Triton X-100, and 0.01% 2-mercaptoethanol]. The lysates were sonicated and centrifuged at 15,000 rpm for 10 min at 4°C to remove insoluble material. The supernatant was transferred to a new tube and stored at -20°C until Western blotting analysis. The total protein concentration was measured by the Bio-Rad protein assay kit (Hercules, USA) using bovine serum albumin as the standard. Samples containing equal amounts of protein concentration were heated at 95°C for 5 min, and then separated by 10% sodium dodecyl sulfate-polyacrylamide gel electrophoresis and electrotransferred to NC membranes at 10 V for 25 min using a semidry transfer (Bio-Rad Ltd., USA). The membranes were blocked for 2 hours at room temperature with Tris-buffered saline containing 5% non-fat milk, and were then incubated with anti-COX-2 antibody (diluted 1:1,000) for 4 hours at room temperature and subsequently with horseradish peroxidase-conjugated anti-goat secondary antibody (diluted 1:2,500) for 1 hour at room temperature. Peroxidase activity was visualized using an ECL kit and α-tubulin was used as an equal loading control.

All data were expressed as means ± standard deviation (SD) from at least three independent experiments. Statistical significance was analyzed by Student’s t test and one-way analysis of variance (ANOVA) using SPSS Version 13.0. Value of p<0.05 was considered to be statistically significant differences.

PB2 content of the purified subfraction from apple pomace was 72.3 ± 1.8%, which was increased greatly (Figure 2). It suggested that PB2 with a high purity can be efficiently obtained from apple pomace through fractionation and purification with macroporous absorbent resin and sephadex, respcetively. Prior to the 1 μg/mL LPS treatment for 20 hours, RAW264.7 cells were treated with 50 μg/mL PB2 for different hours, respectively. All COX-2 expressions in LPS-induced cells were markedly inhibited by PB2 from 2 to 24 hours (Figure 4). Moreover, the inhibitory activity of PB2 was the strongest at pretreating time 8 hours. After being pretreated with different concentration LPS (10, 100, 1000 ng/mL) for 20 hours respectively, and then 50 μg/mL PB2 for 4 hours, the express of COX-2 protein were analyzed by Western blotting. The results showed that PB2 had no repairing function in LPS-induced cells (Figure 5). The levels of COX-2 expression in the model groups were higher than those in the control groups, which indicated that PB2 could aggravate inflammation in LPS-induced cells. Furthermore, COX-2 protein was expressed in a LPS dose-dependent manner. PB2 with a high purity of 72.3 ± 1.9% was successfully obtained from apple pomace through fractionation and purification using macroporous absorbent resins and sephadex, respectively. Purified PB2 from apple pomace can significantly suppress COX-2 expression at no less than 50 μg/mL. And this inhibitory effect was not correlated with pretreating time of PB2 from 2 to 24 hours. However, PB2 has no repairing function in LPS-induced cells. Up to now, these findings have not been reported elsewhere. Our results also suggested that PB2 can be used as an anti-inflammatory nutraceutical for making healthcare product. Apple pomace is one of rich sources of PB2. The recovery of PB2 from apple pomace provides another important biotechnological application of this agro-byproduct. 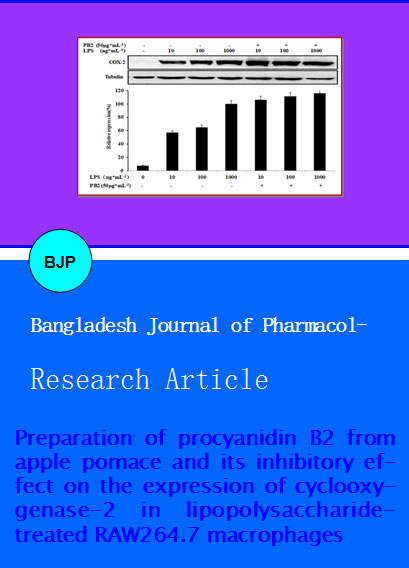