Herbal medicines are being used for the treatment of different diseases for centuries. Sustainable development of herbal medicines need the study of their safety, efficacy and standardization are essential. Two commercially available herbal medicines i.e., Ziabetes (dolabi) and Jambadayrist, and a folkloric medicine prepared from four plant materials by a local practitioners were investigated for their chemical compositions. Four compounds were isolated from the extracts of these medicines by silica gel column chromatography. Oleic acid and p-hydroxycinnamic acid were isolated from the aqueous 80% ethanol extract of the folkloric medicine whereas benzoic acid was found to be present in Ziabetes and Jambadayrist. The present investigation revealed that excessive amount of benzoic acid (or sodium benzoate) is being added as preservative in commercial herbal medicines.

Use of medicinal plants for treatment of different ailments is as old as human civilization. Africa, Australia and Asia are the three continents where traditional medicine became popular and ~80% of the people in the developing countries are still dependent on plant based medicines (TDR 2005; Newman et al., 2000). The medicines are termed as herbal medicines which are prepared either from aerial parts of herbs or the whole plant or parts of plants i.e., barks, leaves, roots, stems, flowers, fruits and seeds. Herbal products may contain a single herb or combination of several different herbs (Mosihuzzaman and Choudhary, 2008). In case of multiple plants it is believed that the efficacy is due to synergistic effects. Raw herbs are available in the market and the formulated products of the herbs are prepared following different pharmacopeia (Mosihuzzaman and Choudhary, 2008).

Although some of the modern medicines are affordable by the low income people of least developed countries, a large number of people still rely and like to use plant medicine like Ayurvedic and Unani medicine in the Indian Subcontinent, and Traditional Chinese Medicine in China. Besides that, the herbs are also very popular in the developed countries (De Smet, 2005). Many herbal medicines, herbs and herbal products are available in the USA, Japan (Kampo), and European countries (Fisher and Ward, 1994). People use herbs as complementary or integrating medicine along with prescribed drugs. In the recent times, African and Asian nations encourage traditional medicine as an integral component of their public health care programs as they are relatively inexpensive, locally available and are readily accepted by the local population.

Diabetes, a non-communicable heterogeneous group of disorders, is the third major cause of death after cancer and heart diseases. Currently 3.2 million people die every year from diabetic complications. It has been estimated that by 2025, diabetic patients will be over 300 million around the world posing a major challenge to the healthcare and social welfare (Wild et al., 2004). No new medicine is discovered to combat diabetes after discovery of metformin and sulphoryl urea and its derivatives. Plant materials and/or herbal drugs are considered as alternative source for the management of diabetes. However, the safety, efficacy and standardization of herbal medicines are to be assessed to make them acceptable as an essential component of public health care. The objective of the present work is to determine chemical compositions of two commercially available herbal antidiabetic medicines i.e., Ziabetes (dolabi) and Jambadayrist and a folkloric medicine prepared by a local practitioner who treats his patients for diabetes in Jessore area.

Ziabetes (dolabi) and Jambadayrist, two commercial antidiabetic herbal medicines were purchased from the herbal medicinal shop of Dhaka city. Folkloric medicine, a combination of four plant materials i.e. Nigella sativa, Piper nigrum, Achyranthes aspera and Sida spinosa was supplied by a medicine man who prepares it in the form of pellet (bori) and treats his patients  for diabetes management.

Herbal preparation (pellets; 250 g) was mixed thoroughly and extracted with aqueous 80% ethanol (100 mL x 3) at room temperature for 24 hours. The extract was collected by suction filtration, evaporated into dry mass by a rotavapor at bath temperature below 40°C. Residual solvent from the dried material was removed by freeze dryer to obtain 40 g of extract.

The dichloromethane extract (300 mg) of Jambadayrist was fractionated by silica gel column following the same way using dichloromethane as column equilibrating solvent and elution was performed by dichloromethane and methanol with increasing polarity. A single compound (III, 30 mg) was isolated from the column when eluted with 15%methanol in dichloromethane.

Properties of the isolated compounds

Compounds I, II, and III were isolated from the dichloromethane soluble part of aqueous 80% ethanol extract of folkloric medicine and dichloromethane soluble part of Jambadayrist, respectively by silica gel column chromatography. The compound I gave IR absorption at 2900, 1700 and 1450 cm-1 for the presence of CH3-, -COOH and -C=C- groups, respectively. 1H NMR spectrum of I had signals at d 11.3, 5.3 and 5.3, 2.3-1.3 and 0.8 ppm for the presence of carboxylic acid, olefinic protons, methylenes and methyl group, respectively. The 13C NMR spectral data at d 180.0, 131.1 and 128.1, 34.1-22.6 and 14.0 ppm revealed that carboxylic group, olefinic carbons and methyl group were present in I and was characterized as 9-octadecenoic acid or oleic acid (Shoeb et al., 2010). The compound II had UV absorption maxima, lmax at 215, 235, 315 nm and suggested the presence of aromatic ring. The IR absorption at 3450, 1720, 1520 and 1450 cm-1 indicated the presence of hydroxyl group, carboxylic acid and unsaturation, respectively. 1H NMR spectral data at d 8.1 and 6.3 ppm indicated the presence of two protons with olefinic carbons. The higher coupling constant (J=16 Hz) suggested for trans (Z) configuration (Shoeb et al., 2006). The signals at 7.7 and 7.5 ppm having coupling constants 7.6 Hz in the 1H NMR spectrum indicated the presence of 1,4 disubstituted benzene ring structure in II. Thus, II was characterized as p-hydroxy cinnamic acid. p-Hydroxy cinnamic acid is a common secondary metabolites usually found in plant materials due to biosynthetic pathway (Haddock et al., 1982). Silica gel column chromatography of the dichloromethane extract of Ziabetes also afforded benzoic acid (III) and compound IV. UV, IR and 1H and 13C NMR spectral data of compound IV were similar to that of I with additional double bond which was confirmed by signals at δ 5.1 (overlapping double bond) and 130.1 and 127.9 ppm, respectively in the 1H and 13C NMR spectrum, and compound IV was characterized as 9,12-octadecadienoic acid or linoleic acid. Linoleic acid is a omega 6 fatty acid which is reported to be beneficial for health related to diabetes type 2 (Ugar et al., 2010). 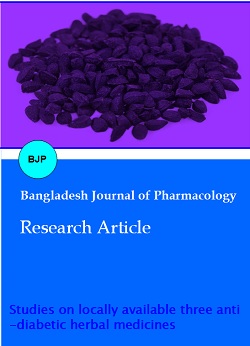