Pattern of use of analgesics in a surgical unit

Analgesic used pre-operatively reduces the dose of general anesthetics having low therapeutic index, thereby, producing balanced anesthesia and makes better adherence to the treatment with minimal post-operative complications. Post-operative pain manage ment is an important but seemingly undervalued component of perioperative care. Over the past decade, medical societies, governmental agencies, and accrediting bodies such as the Joint Commission on Accreditation of Healthcare Organizations (JCAHO) have paid increasing attention to the management of all types of pain, including post-operative pain (Michael, 2006).

Despite this increased focus, the literature suggests that many patients continue to experience significant post-operative pain.

Opioid analgesics have long been shown to produce a dose-dependent reduction in the minimum alveolar anesthetic concentration (MAC) of volatile anesthetics (Hoffman and DiFazio, 1970). However, in animal studies designed to assess the effect of ketorolac on the volatile anesthetic requirement, no reduction in MAC could be demonstrated (Rich et al., 1992). Thus, it is not surprising to find that intraoperative anesthetic conditions are generally less satisfactory when ketorolac is used as an alternative to a potent opioid analgesic (Ding and White, 1992).

Despite the failure of NSAIDs to replace opioid analgesics in the management of acute intra and post-operative pain, these drugs may play a useful role as adjuvant for improving post-operative analgesia. For example, in a placebo-controlled study involving ambulatory surgery patients, ketorolac, 30/60 mg IV, given intraoperatively, produced a dose-dependent decrease in post-operative pain scores and opioid analgesic requirements (Souter et al., 1994). Post-operative pain is one of the most prevalent types of acute pain and is an expected result of surgical procedures experienced by thousands of patients all over the world (Ashburn and Ready, 2001).

Post-operative pain manifests in a moderate or intense manner in 40 to 60% of cases for more than 50% of the time (McCaffery and Ferrell, 1999). Its somatic and psychic expression may be directly or indirectly associated with increased morbidity and mortality, with consequent social and economic repercussions. Thus, over the last decades this organic manifestation has gained the dimensions of a world public health problem (Secoli et al., 2006). In developed countries, the interest in the economic aspects of analgesia applied during the post-operative period is recent and has been concentrated on high-cost treatments, especially in view of the use of new technologies in the management of discomfort (Choinière et al., 1998).

In view of the above considerations and of a scenario in which the practice and the technical decisions of health professionals are increasingly tied to economic restrictions, the present study was designed to evaluate the prescribing pattern of analgesic and see the pattern in a government medical college hospital.

This prospective observational study was carried on 180 patients in a surgical unit from July 2007 to June 2008.

Analysis of data were done with the help of computer by SPSS program version of 12.0 Software facilities.

Figure 1: Distribution of the patients admitted in the hospital according to analgesics used from operation day to sixth post-operative day

Diseases for which surgery had been done were cellulitis, cholelithiasis, intestinal obstruction and appendicitis in the hospital. The only drug in the operation day that was used was pethidine. The cause of only use of pethidine was that the drug was supplied by the government. Associated analgesic in the operation day in the hospital was both tramadol and ketorolac. Serdar et al. (2008) conclude that pethidine and tramadol are effective in providing analgesia in pediatric patients. Changes in blood pressure, heart rate and arterial oxygen saturation were minimal and were similar in both drugs.

Each hospital should have its own need based hospital formulary so that working doctor will strictly adhere to it and prescribe rationally all drugs including analgesics thereby improving the health care delivery system with minimal cost and adverse effects.

McCaffery M, Ferrell BR. Nurse's knowledge of pain assessment and management: How much progress have we made? J Pain Symptom Manag. 1999; 14: 175-88. 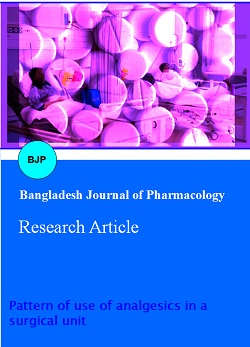