The concentrations of organochlorine insecticides (DDT and heptachlor) were investigated to estimate the effect of various washing and boiling/cooking to elucidate the concentration level we intake actually. For this study five most popular dry fish samples namely bombay duck (loittya), ribbon fish (chhuri), shrimp (chingri), chinese pomfret (rupchanda) and Indian salmon (lakhua) were analyzed. The highest concentrations of DDT and heptachlor were found 737.2 ppb (Indian salmon, normal) and 44.8 ppb (shrimp, normal) respectively; after boiling treatment a big amount was washed out and remained only 135.5 and 16.9 ppb respectively. Boiling treatment was found more effective than the others.

For long conservation of fish by drying is common practice in Bangladesh. This practice is usually made in the remote coastal isolated islands and in inland depressions where chilling and freezing facilities are lacking. The finally dried fish products are generally stored in a dump warehouse nearby coastal towns. In addition to this, the weather is humid particularly during the monsoon period and the dry fishes absorbed moisture rapidly that the fish becomes suitable for infestation by beetles and mites. Most unexpected causes of infestation are that the fishermen do not dry fishes properly due to loss of weight i.e., the fishermen want more profit selling the dry fishes in weight. For protection of dry fish from infestation they use a mixture of organochlorine (DDT and heptachlor) insecticides (Bhuiyan et al., 2008). Some analyses in Bangladesh show alarming pollutants in fish like DDT and heptachlor (BCAS, 1990). In Kuakata (a fish processing zone in Bangladesh), high level of DDT powder (locally known as white powder) is used though Bangladesh banned the 'dirty dozen' in 1997 (Barua, 2007) and there is no statistical figure about these organochlorine insecticides in Bangladesh (UNEP, 2002).

DDT is highly stable under most environmental conditions and very lipophilic (Kow: 9.6 × 105), which favors its bioaccumulation throughout the food chain (Morrison and Newell, 1999).  DDT can transfer from generation to generation through breast milk (Solomon and Weiss, 2001). In areas where it is used for malaria control, infants can be exposed via breast milk (Bouwman et al., 2006; Ntow et al., 2008). It is classified as "moderately toxic" by the US National Toxicological Program and "moderately hazardous" by WHO and a B2 probable human carcinogen (WHO, 2005). Exposed to DDT increased the incidence of non-allergic asthma (Brown, 2007), linked to diabetes (Jones et al., 2008), an elevated risk of cancers of the liver and biliary tract (Rogan and Chen, 2005) and the risk of breast cancer (Clapp et al., 2008). On the other hand, heptachlor is a probable human carcinogen (B2) and can pass directly from a mother's blood to an unborn baby through the placenta, it also related to liver tumors (LDWG, 2007).

The control samples of five different fishes were collected from drying yards of Sonadia island (a fish processing zone of Bangladesh) that are known sample treated with no insecticides and taken into account as blank.

All the solvents used for the analysis purchased from Merck, Germany. DDT and heptachlor standards were obtained from Sigma Chemicals, USA.

All the samples were finely comminuted in a mincer; heating of the samples during comminuting is avoided by briefly chopping several times (Peter and Zeumer, 1987).

Triturate a sample of 25 g, with sodium sulfate to dry, powdery mixture, with the aid of an extraction thimble; extract the mixture exhaustively with petroleum ether in soxhlet apparatus. Concentrate just to dryness the extract solution by a concentrator and dilute to 25 mL with petroleum ether saturated with dimethyl formamide (Peter and Zeumer, 1987).

The DDT and heptachlor residues were analyzed by GC-14B, Shimadzu with an electron capture detector (ECD), a manual sampler and GC solution software. A column of 3.1 m x 3.2 mm; I.D glass spiral; stationary phase silicon OV-17, 5%, aging 300°C, support chromosorb-W-AW-DMCS, mesh 80/100, 1 μm film thickness was used for the chromatographic separation of insecticides. The temperature was fixed for the injector at 250°C, column at 280°C and detector at 280°C. The carrier gas was nitrogen with a 60 mL/min flow rate. 1.0 μL sample was injected for each run and the running time was 25 min. Standards’ peak were identified by injecting high concentration of the standard (0.5 and 0.3 ppm) and the retention time for DDT and heptachlor were determined. Then calibration was done at 3 points (25, 50 and 100 ppb) by composite stock standard solution. GC system was calibrated using external standard technique. Individual standard stock solution (100 mg/L) was prepared by weighing appropriate amounts of active ingredients in a brown bottle with a Teflon-lined screw cap and dissolving the weighed standard in HPLC grade hexane. Stock standard solution was used to prepare primary dilution standards. Appropriate volume of each individual stock solution was taken in a volumetric flask and mixed the solutions to obtain composite stock standard solution.

Gas chromatograph equipped with ECD was checked for linearity. Instrumental limit of detection for GC-ECD was 1.0 μg/L for organochlorine pesticides. An aliquot of dry fish samples which were collected as blank and treated exactly as a sample including exposure to all glassware, equipments, solvents and reagents used with the sample matrix. No analyte peak was detected in laboratory reagent blank. An aliquot of fortified samples matrix were prepared to which known quantities of the pesticides were added in the laboratory in ppb range. This laboratory fortified matrix was analyzed exactly like the sample. Extraction and clean up were done as mentioned and the recoveries from untreated control samples of dry fish fortified with the analyzed compounds at level of 25 ppb were 96-100% for heptachlor and 98-100% for DDT. Prior to injection of the first sample solution, a standard solution was injected at least three times to check the operating conditions and the constancy of the detector signals. Further linearity of the ECD signal was checked by injecting serial dilutions of DDT and heptachlor. A standard solution injected after at least every other sample solution so that any alterations of the gas chromatographic system recognized due to column contamination.

Twenty samples of five different fish species were analyzed for this purpose. All of the samples contained organochlorine insecticides are shown in Table I.

Table I: DDT and heptachlor concentrations in the dry fish samples after various washing and boiling treatment

The study on the effect of traditional washing and boiling on DDT and heptachlor in dry fish to elucidate the concentration level of dietary intake was not done before. Contamination of vegetables with pesticide residues has been reported by several researchers (Madan et al., 1996; Kumari et al., 2002, 2003) and washing was found effective in dislodging the residues as it depends on a number of factors like location of residues, age of residues, water solubility and temperature and type of washing. In earlier studies also, effects of these factors were observed in different vegetables by various researchers (Sarode and Lal, 1982a, 1982b; Dikshit et al., 1986; Geisman, 1975; Gunther et al., 1963). Some researchers reported 20-89 percent reduction of DDT in potatoes and tomatoes, fenitrothion in okra, parathion in cauliflower and malathion in okra by washing (Farrow et al., 1969; Sarode and Lal, 1982a; Elkins, 1989). Boiling was found comparatively more effective than washing in dislodging the residues in vegetables (Kumari and Singh, 2008). But the present study have been undertaken in order to provide the preliminary information on the concentration of DDT and heptachlor in dry fish after various traditional washing for the first time and to investigate their concentration level we intake actually.

From the above results it was found that all the samples of dry fishes contained DDT and heptachlor and these insecticides were not removed 100% by any type of washing, even after washing followed by 10 min boiling, (except in bombay duct boiling treatment sample, heptachlor was not detected). Our people think that these insecticides remain only on the surface of the dry fish and it is washed out with vigorous washing, somebody also thinks that if it is washed followed by boiling the poison will be destroyed and washed out with water. But DDT and heptachlor are nearly insoluble in water and has a good solubility in most organic solvents, fats and oils. Moreover these are highly stable molecule. In this experiment a big amount of DDT and heptachlor were washed out at various washing but a significant amount was remained due to their water insolubility, fats solubility and high stability. The concentration of DDT and heptachlor were decreased by washing due to the removal of the organochlorine insecticides present in the outer surface of the dry fish. Further decrease of organochlorine insecticide concentration in boiling treatment and hot washing treatment than cold washing treatment was due to more loss of fats and oils with hot water and organochlorine insecticides were somewhat drained out with this lost fats and oils.

We intake a significant amount of DDT and heptachlor with our diet when palatable dry fish is our one of the items of menu though we show our greater sincerity of washing. 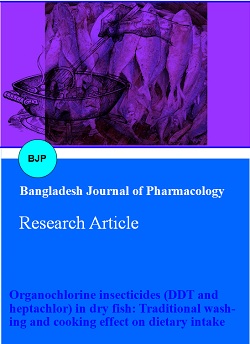