The present study was carried out to evaluate the cerebroprotective effect of the aqueous extract of the roots of Glycyrrhiza glabra Linn. (250 and 500 mg/kg) in hypoxic rats. Hypoxia was induced by providing sodium nitrite drinking water to rats for 14 days. Extract at the tested doses promoted the locomotor activity and spatial behavior significantly, which was impaired in hypoxic rats. The extract administration restored the decreased levels of brain enzymes such as glutamate and dopamine and decreased acetylcholinesterase (AChE) activity significantly. Levels of antioxidant enzymes such as superoxide dismutase, glutathione peroxidase, glutathione reductase and catalase were reduced due to hypoxia and were restored to near normalcy by administration of ethanol extract of G. glabra. Increased lipid peroxidation in hypoxic rats was also restored significantly by extract treatment. Thus, this study suggests that ethanol extract of G. glabra possess a cerebroprotective effect in hypoxic rats, which may be mediated by its antioxidant effects.

Oxidative stress is implicated as one of the primary factors that contribute to the development of neurodegenerative diseases like, Alzheimer’s, Parkinsonism and neurological conditions like epileptic seizures, stroke, brain damage, neurotrauma, hypoxia etc (Srinivasan, 2002). The highest degree of oxidative damage usually occurs in organs like brain, heart and skeletal muscles, since these organs are composed primarily of post mitotic cells. the central nervous system shows increased susceptibility to oxidative stress because of its high oxygen consumption rate (20% of the total oxygen inhaled by the body) that accounts for the increase in  generation of oxygen free radicals and reactive oxygen substances like superoxide radical (O2), single oxygen (O2), H2O2 and hydroxyl radical (OH) (Srinivasan, 2002).

Glycyrrhiza glabra Linn. of the family Leguminosae, is a genus of perennial herbs and under shrubs distributed in the subtropical and warm temperate regions of the world, chiefly in the Mediterranean countries and China. The dried, peeled or unpeeled underground stems and roots constitute the drug known in the trade as liquorice (Anonymous, 1985).

Accordingly, the present study was designed to explore the potential of G. glabra roots to protect brain from hypoxic damage induced by sodium nitrite.

Roots of G. glabra were purchased from an herbal drug store in Chennai, Tamil Nadu, India during August 2007. The material was identified by Prof. P. Jayaraman, Director, Plant Anatomy Research Centre, Chennai. A voucher specimen was deposited in our laboratory for future reference.

The roots were shade dried and pulverized in a grinder to a coarse powder. Weighed quantity (1 kg) was passed through sieve number 40 and subjected to soxhlet extraction using distilled water. The extract was dried and weighed. A brownish black waxy residue with 21.1% w/w yield was obtained. This aqueous extract of G. glabra was used for animal administration.

Inbred colony strains of Wister rats of either sex weighing 150-250 g procured from the animal house of C. L. Baid Metha College of Pharmacy were used for the study. The animals were maintained in polypropylene cages of standard dimensions at a temperature of 28 ± 1°C and standard 12:12 hours day/night rhythm. The animals were fed with standard rodent pellet diet (Hindustan Lever Ltd.) and water ad libitum. Prior to the experiment, the animals were acclimatized to the laboratory conditions. The experimental protocol was approved by Institutional Animal Ethical Committee (IAEC) constituted under CPCSEA. (IAEC Ref No: IAEC/XIII/06/CLBMCP/2007-08 dated 24-07-2007).

Preliminary phytochemical screening was performed as per procedure of Kokate et al. (2004).

Albino mice weighing 22-25 g selected by random sampling technique were used in the study. Acute oral toxicity was performed as per OECD-423 guidelines (Ecobichon, 1997). The animals were fasted overnight, provided only water after which aqueous extract was administered to the groups orally at the dose level of 5 mg/kg body weight by gastric intubation and the groups were observed for 14 days. If mortality was observed in 2 or 3 animals among 6 animals then the dose administered was assigned as a toxic dose. If mortality was observed in one animal, then the same dose was repeated again to confirm the toxic dose. If mortality was not observed, the procedure was repeated for further higher doses such as 50, 300 and 2,000 mg/kg body weight. The animals were observed for toxic symptoms such as behavioral changes, locomotion, convulsions and mortality for 72 hours.

The Morris water maze was performed using a circular water tank of standard dimensions (Morris, 1984). After several trails, the test was conducted on the 14 day of sodium nitrite water drink. The time required to escape on to the platform was recorded.

Estimation of dopamine and metabolic enzymes

On the day of experiment rats were sacrificed, whole brain was dissected out and separated the sub cortical region (including the striatum). Weighed quantity of tissue and was homogenized in 0.1 mL hydrochloric acid-butanol, (0.9 mL of 37% hydrochloric acid in one liter n-butanol for spectroscopy) for 1 min in a cool environment. The sample was then centrifuged for 10 min at 2,000 rpm. 0.08 mL of supernatant phase was removed and added to an Eppendorf reagent tube containing 0.2 mL of heptane (for spectroscopy) and 0.025 mL 0.1 M hydrochloric acid. After 10 min of vigorous shaking, the tube was centrifuged under same conditions to separate two phases. Upper organic phase was discarded and the aqueous phase (0.02 mL) was used for dopamine estimation (Schlumpf et al., 1974).

Estimation of acetylcholinesterase (AChE)- 20 mg of brain tissue per mL of phosphate buffer (0.1 M; pH 8) was homogenized in a potter-elvehjem homogenizer. A 0.4 mL aliquot of brain homogenate was added to a cuvette containing 2.6 mL of 0.1 M phosphate buffer. 100 µL of dithiobisnitro benzoic acid reagent was added to the cuvette and the absorbance was measured at 412 nm. 20 µL of acetylcholine chloride was added. A change in the absorbance was recorded and the change in absorbance/min was calculated. It was expressed in µ mol/min/g tissue (Ellman et al., 1961).

Brain glutamate estimation Weighed quantity of the brain portion was homogenized with 2 parts by weight of perchloric acid and centrifuged for 10 min at 3,000 rpm. 3 mL of supernatant fluid was adjusted to pH 9.0 with 1 mL phosphate solution. It was allowed to stand for 10 min in an ice bath and then filtered through fluted filter paper. Absorbance was measured at 340 nm. Similarly a blank reading at 340 nm was measured. The level of glutamate was expressed as µmol/g tissue (Bernt and Bergmeyer, 1965).

Estimation of antioxidant enzymes 100 mg of the brain tissue was weighed and homogenate was prepared in 10 mL tris hydrochloric acid buffer (0.5 M; pH 7.4) at 4°C. The homogenate was centrifuged and the supernatant was used for the assay of cytoprotective enzymes namely catalase (Aebi, 1983); glutathione peroxidase (Lawrence and Burk, 1976); superoxide dismutase (Marklund and Marklund, 1974); glutathione reductase (Dobler and Anderson, 1981) and lipid peroxidation (Luck, 1965).

The preliminary phytochemical screening carried out on aqueous extract of G. glabra revealed the presence of phytoconstituents such as alkaloids, carbohydrates, saponins, triterpenoids, flavanoids and flavones.

The extract did not produce any toxic symptoms of mortality up to the dose level of 2,000 mg/kg body weight in rats, and hence the drugs were considered safe for further pharmacological screening. According to the OECD-423 guidelines for acute oral toxicity, the LD50 dose of 2000 mg/kg and above is categorized as unclassified.

Table I: Effect of G. glabra on water maze task

The extract treated groups exhibited significant (p<0.05 and p<0.01) increase in locomotor activity respectively for 250 mg/kg and 500 mg/kg of aqueous extract when compared with the negative control group (Table II).

The levels of cytoprotective (antioxidant) enzymes such as super oxide dismutase, glutathione peroxidase, glutathione reductase and catalase were reduced (p<0.01) due to induction of hypoxia in Group II, with an increase in lipid peroxidation (p<0.01). Administration of aqueous extract increased the levels of the enzymes significantly (p<0.05 and p<0.01) for 250 and 500 mg/kg respectively. Lipid peroxidation was significantly decreased (p<0.01) by the administration of aqueous extract 250 and 500 mg/kg (Table IV).

During hypoxia, changes will occur in the diffusion parameters of the extracellular space and extracellular concentration of energy–related metabolites and glutamate in rat cortex. Hypoxia in rat cortex has shown decrease in extracellular space volume and increase in tortuosity with in few minutes following cardiac arrest. Glucose levels were critical in regulating redox state during hypoxia; the cellular redox state was determined by increasing the reactive oxygen species. Supply of glucose increases cellular redox state and lowers the reactive oxygen species and cell death (Holingan and Jain, 2006).

Exposure to hypoxia alters the dendritic carbonization of hippocampal neurons and impairs the spatial learning and memory. Hypoxia will affect dendric morphology of the CA1 neurons. Exposure to more days result in significant reduction in branching points, intersections and dendric length in most of the segments, significantly elevated levels of calcium and protein synthesis may lead to delayed neuronal death in CA1 region after hypoxia. The CA3 cells have higher level of metabolic activity than the CA1 cells and this may make them more vulnerable to hypoxia (Titus et al., 2007)

The AChE activity has been shown to be increased with in and around hypoxic brain. The calcium influx followed by oxidative stress is involved in the increase in activity of AChE induced by sodium nitrite, decreasing cell membrane order and ultimately leading to the exposure of more active sites of the enzyme. Increasing in AChE activity and ROS production indicates that it can be possible to ameliorate cholinergic function by inhibiting sodium nitrite, which induces increase in AChE activity.

The AChE activity in the brain was increased in rats treated with sodium nitrite when compared with the normal; in addition, the sodium nitrite induced increase in AChE was attenuated by aqueous extract treatment.

This study suggests that markedly aqueous extract improves antihypoxic effects induced by sodium nitrite and this effect may be mediated by its antioxidant properties. 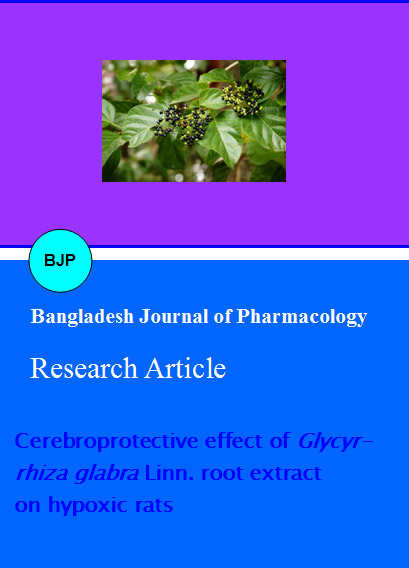