Prescribing pattern in a Pediatric Out-patient Department in Gujarat

This study was carried out to find the medicine-prescribing pattern in children taking treatment in Pediatric Out-patient Department of a tertiary care teaching hospital in rural Gujarat. Prescriptions of 606 patients were collected over a period of six months and analyzed for (i) average number of medicines per prescription, (ii) percentage of medicines prescribed by official names, (iii) essentiality status of medicines, (iv) appropriateness of medicines used and (v) cost of prescription. The average number of medicines per prescription was 3.7 ± 0.1 and 46.7% patients were prescribed up to 3 medicines. Of the 1483 medicines prescribed, 456 (30.7%) were prescribed by official names and 77.6% were essential. Only 20.1% prescriptions could be reckoned as most appropriate. Twenty percent of the total cost was on account of non-essential medicines, of which 95% was contributed by non-essential fixed dose drug combinations.

Children constitute about 40% of India’s population. Infants and children suffer from frequent but usually non-serious illnesses. Most of these are self-limiting (Straand et al., 1998) and are often treated not only inappropriately, but also resorting to polypharmacy (Ghai and Paul, 1988). Prescribers and the consumers are flooded with a vast array of pharmaceutical preparations with innumerable trade names, available often at an unaffordable price. Epidemiological evaluation of medicine use in the elderly is now a highly visible topic, but drug utilization studies in pediatric population have been limited. The assessment of medicine utilization is important for clinical, educational and economic purposes (Uppal et al., 1984). The ultimate goal is to achieve rational and cost effective medical care, particularly in the economically developing countries.

Considering these facts, this study was planned to find the medicine prescribing pattern in children taking out patient treatment in the pediatric department of a tertiary care rural teaching hospital in Gujarat state of India.

Dosage form and route of administration

Medicines or fixed-dose drug combinations mentioned in the model list of Essential Medicines (WHO, 2005) or National Essential Drug List (Government of India, 2002) or logical substitutes thereof were considered as ‘essential’ while the rest were accorded the status of ‘non-essential’. Essential medicines or fixed-dose drug combinations were allotted the score of 2 while non-essential were assigned the score of 0.

Thus, based on above 5 parameters and criteria, a medicine or medicine combination could have a score of minimum 0 to a maximum of 10 in the appropriateness scale.

Table I: Number of medicines prescribed

The distribution of “appropriateness score" for individual prescription is shown in Table III. A score of 2 for the most appropriate dosage form and route of administration was assigned to 1,478 (99.7%) medicine formulations and also the same for dose, frequency of administration, duration of treatment and essentiality were assigned to 58.5, 60.4, 33.8 and 77.6% medicines respectively.

Correct diagnosis of a disease and its management with medicines, constitute important aspects of patient care which is even more important in case of pediatric patients. For this it is very prudent to study the prescribing practice in pediatric patients in order to find out lacunae, if any, and suggest remedial measures to overcome the same. In the present study, on an average 3.7 medicines were prescribed per patient, which is much higher as compared to 1.4 and 2.3 in similar studies from Sweden and Spain (Sanz and Boada, 1988). Gajjar et al. (1999) showed the average number of medicines to be 3.3 per prescription in adult patients. Prakash et al. (1989) and Ansari et al. (1998) found this number to be 5.9 and 5.1 medicines per prescription respectively in their studies. We also found that more than half of the patients were given four or more medicines. Thus it is evident that the polypharmacy and over prescribing are common in India, an economically developing country, as compared to economically developed western countries. Various reasons can account for this situation like lack of self confidence in doctors for diagnosing and treating common disease conditions; unrealistic expectations and demand for quick relief from the patients; availability of non-essential and irrational drug combinations; and aggressive medicine promotion and unethical marketing practices of pharmaceutical companies (Ansari et al., 1998).

In the present study 39% fixed-dose combinations could be considered as essential which is much higher than that (11%) in the study of Kasturi et al. (1999).  Formulating and implementing a drug formulary based on essential medicines concept at this institution could be one reason for this difference. The higher percentage (96.6%) of non-essential fixed-dose combinations (not available from our hospital pharmacy, but prescribed from out side) in this study is responsible for irrational use of medicines.

It is important to choose the right medicine(s) for a patient and in an appropriate manner in order to achieve the best results of medicine therapy. It is heartening to note that for 99.7% of medicines, a right dosage form and right route of administration were chosen. More than 3/4 of the medicines used were essential. However in respect of duration of treatment, in nearly two thirds of medicines it was totally inappropriate. These aspects of medicine use certainly need correction. A possible reason for this observation could be due to the fact that in a teaching hospital all prescriptions are not written by senior consultants but some are written by postgraduate students and interns who are in a formative period of training. However this increases the responsibility of supervising seniors and right kind of training inputs would go a long way in making the prescribing behavior of young doctors more rational.

On the basis of appropriateness scale, more than 80% prescriptions could be rated either as appropriate or most appropriate. Only about 1/6 of all prescriptions were found to be inappropriate. Considering the fact that the study was conducted in a tertiary care teaching institution, high proportion of appropriateness is not unexpected. We also found that more than 95% of total cost on account of non-essential medicines was due to prescribing of non-essential fixed-dose drug combinations. If conscious efforts are made to curtail the use of non-essential fixed-dose drug combinations, one can certainly decrease this wasteful expenditure on medicines. Srivastava and Desai (1997) showed that there is a wide variation in cost amongst different brands of common antibacterials. In certain cases the ratio of costliest to cheapest brands of same antibacterial was more than four. Prescribing medicine by official names can therefore drastically bring down the cost of medicine treatment and lead to better patient compliance. 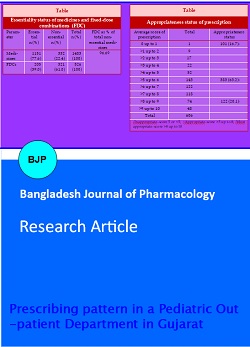