A cross-sectional study on consumption patterns of non-steroidal anti-inflammatory drugs (NSAIDs) by the community without prescription was conducted in Dhaka Metropolitan City. A total of 608 encounters from 16 pharmacies were interviewed from people found to purchase drugs of the pharmacy from their self demand. The commonest purchased NSAIDs per encounter was paracetamol (37.0%). Ibuprofen (13.8%), diclofenac sodium (12.7%), aspirin (7.4%), naproxen (6.9%) and other group of NSAIDs (22.2%) were also purchased. The influence by friends/relatives (30.3%) previously advised by the doctor to purchase the NSAIDs for the same complaint were (29.1%); pharmacy salesmen’s advice (28.3%) and other reasons (12.3%). The total cost of purchased NSAIDs per encounter were less than Tk. 5 (6.9%), Tk. 5 to less than Tk. 10 (45.4%), Tk. 10-25 (35.5%) and more than Tk. 25 (12.2%). Single item of drug was purchased along with NSAIDs by 17.1% of encounters.

Fever and pain are usually the early symptoms of most of diseases. To cure and controls of these symptoms non-steroidal anti-inflammatory drugs (NSAIDs) have taken place in a large scale. To minimize the expenditure and hazards to consult with the physician and many more reasons people use to consume NASIDs by his own will throughout the world. As Dhaka is not only the capital city of Bangladesh, but also population crossed 11.2 millions (Turner, 2002) so it is a must to find out the patterns and magnitude of consummation of NSAIDs in this mass population. The production statement of the year 2002 of one of the leading companies of Bangladesh showed that total trade price of paracetamol tablets (500 mg) was Tk. 940,948.31. Almost all the drugs except narcotics were found to be sold in the market of Dhaka City without  prescription (Ashraf and Bhuiyan, 2003). The prescribing pattern of NSAIDs in prescriptions prescribed by the qualified medical personnel in the Out-patient Departments of three selected teaching hospitals in Dhaka city were described (Rahman et al., 2007) .

The study was carried out in Dhaka city during July 2002 to June 2003. Thanas were selected by random method from the different parts of the city so that it can represent the whole population. Each two Thanas were selected randomly from Northern, Southern, Eastern and Western geographically part of Dhaka city. As a result eight Thanas were taken under study design. The researcher tried to find out and note down each and every pharmacies of each Thana. Now, from each Thana two pharmacies were selected by random method. As a result, total 16 pharmacies were selected for research. Total 608 encounters (who purchased NSAIDs without prescription) were interviewed by structured questionnaires from randomly selected pharmacies to enroll in the study. Data were processed, simplified, tabulated and analyzed by using SPSS software, version 10.0.

The commonest purchased NSAIDs per encounter were paracetamol (37.0%). Ibuprofen (13.8%), diclofenac sodium (12.7%), aspirin (7.4%), naproxen (6.9%) and other group of NSAIDs (22.2%) were purchased respectively (Table I).  Twenty six percent of encounters mentioned generic name while purchasing NSAIDs without prescription, the rest 74% of encounters mentioned the trade name of NSAIDs without prescription.

Table I: Type of NSAIDs purchased per encounter

Almost all the drugs, except narcotics were found to be sold in the market of Dhaka city with or without prescriptions (Ashrafuzzaman and Bhuiyan, 2003). The commonest purchased NSAIDs per encounter were paracetamol (37.0%). In one study in Philippine it was observed that, analgesics were extremely popular in the self medication of non-severe respiratory disorders, often being given three times a day (Hardon and Geest, 1987).

In another study in USA, regarding the safety of paracetamol and ibuprofen among children younger than two years old, Lesko and Mitchell (1999) observed that the risk of serious adverse effect clinical events among the children of 2 years old receiving short-term treatment with either paracetamol or ibuprofen suspension was small and did not vary by choice of medication. Now, it is the time to think about switching on ibuprofen from paracetamol, specially in short-term treatment for use in children even without prescription.

Twenty six percent of encounters mentioned generic name while purchasing NSAIDs without prescription. The popularity of brand name of paracetamol and aspirin in mass people has guided them for mentioning generic name.

Age group of the encounters 15-45 years was 81% of total encounters. This is the working class of active people. Their highest incidence to consume NSAIDs may be due to their frequent nonspecific psychosomatic illness. But in one study it was observed that, self-administration was wide spread, 58.3 to 75.9% of adolescents reported taking an OTC medication for pain. Adolescents reported that they began to self-administer medication begun the age of 11 and 12 years (Chambers et al.,  1997).

In one study in Sweden, Antonov and Isacson (1998) observed that among female, 30.4% reported nonprescription analgesic use, while corresponding proportion among make Among the 608 encounters, males were 74%. The reason behind is that most of the women in Dhaka city are still house wives and hardly visit the shops for their own medications. But were 20.0% respectively.

The commonest occupation of the encounters was service (27.1%). Service included person serving in government, semi government, autonomous or private organizations. The frequent sickness among  the service personnel due to their insecurity of job and professional stress. The laborers includes daily laborer, rickshaw pullers, garments workers, construction workers and industrial workers. As their nature of job required manual labor so, they used to suffer from different nonspecific musculoskeletal pain.

Pain is the commonest symptom that takes patient to doctor (Bennet and Brown, 2003). Headache (24.3%) was the commonest chief complaint of the encounters , while fever was mentioned as chief complaint in 13.1% of encounters, It was observed that encounter consult doctor/unqualified prescriber for quick remedy while in headache/nonspecific pain, encounters directly consume NSAIDs without prescription. Self-medication behavior for the treatment of headache is a widespread phenomenon with costly and hazardous consequences.

The cost of purchased NSAIDs was Tk. 5 to less than Tk. 10 in 45.4% of total purchased drugs. For short-term therapy and for symptomatic treatment encounter purchased NSAIDs within the above – mentioned limit. In addition to that, the another cause to take treatment facility in small budget may be poverty. For the most people in world today every step of life, from infancy to old age, is taken under the twin shadows of poverty and inequality, and under the double burden of suffering and disease (The World Health Report, 1995).

Twenty percent of encounters did not consume any medicine for that current symptom, while 36.1% of encounters received traditional medicine (homeopath/ayurvedi) previously. It was observed that H2 blocker (24.7%) or antacid (18.1%) was purchased along with NSAIDs, to prevent gastric adverse effects. Antihistamine (10.9%) and even antibiotic (2.5%) were also purchased in case of fever and other infective conditions.

This study may only give a baseline data regarding the patterns and magnitude of consumption of NSAIDs only in Dhaka City. To get the profile the consumption of other OTC drugs without prescription and even other abuse-prone narcotics are needed to go for study in national level. An integrated plan may be designed to carry out study throughout the Bangladesh from grass root to top in this regard.

I feel proud that this study was carried out under guidance of Prof. Mir Misbauddin and Dr. Syedur Rahman of BSMMU, who inspired me to make the study successful. Colonel Md. Ashrafuzzaman and Lieutenant Colonel Abdul Karim Khan of AFMC gave their valuable suggestions and constructed criticism throughout the research work. 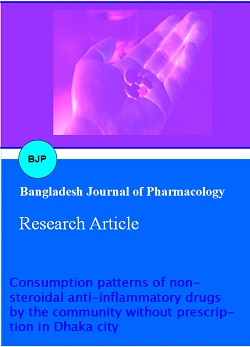