The methanol extract of the root of Aegle marmelos, a medicinal plant, was fractionated into eight fractions using column chromatography. The antidiabetic activity of all the fractions was studied using the glucose uptake by isolated rat hemidiaphragm in vitro model. Using the bioassay-guided fractionation, two compounds 1 and 2 were isolated by column chromatography and identified as 6-methyl-4-chromanone and skimmianine respectively by NMR and mass spectral methods.

An increasing number of research papers and reviews clearly indicate that medicinal plants exhibit a variety of therapeutic properties and could provide health security to rural people primary health care. Among medicinal plants Aegle marmelos Correa (family Rutaceae) appears to be relevant and this plant is available in India, Bangladesh, Burma and Sri Lanka. Its distribution is mainly within the sub-Himalayan forests, in dry hilly places ascending to 4,000 feet. It is called “Shivadume”, the tree of Shiva. Since ancient time, its leaves are offered to Shiva and Parvathi. A. marmelos has an important place in indigenous systems of medicine. With respect to pharmacology, alcoholic and aqueous extracts of the leaves had similar effects as digoxin in amplitude and contractions of the frog heart and methanolic extracts of roots inhibited the beating rate by approximately 50% of cultured mouse myocardial cells (Kakiuchi et al., 1991). Alcoholic extracts of the roots and fruits showed hypoglycemic and antidiabetic activity (Kamalakkannan et al., 2003; Karunanayake et al., 1984; Sabu and Kuttan, 2004). With respect to clinical applications, it should be noted that the roots are astringent, bitter and febrifuge. They are useful in diarrhea, dysentery, dyspepsia, stomachalgia (Shoba and Thomas, 2001), cardiopalmus, seminal weakness, vomiting, intermittent fever swellings. The leaves of A. marmelos are useful as laxative, febrifuge and expectorant, also in ophthalmia, deafness, inflammations, cataract, diabetes, asthmatic and antifungal complaints (Rana et al., 1997). Also, the effect of these extracts was examined in the regulation of hyperthyroidism (Kar  et al., 2002) and for the analgesic activity in mice.  The stem extract inhibit in vitro proliferation of human tumor cell lines (Lampronti et al., 2003).

Diabetes mellitus is a major disease characterized by derangement in carbohydrate, fat and protein metabolism, affecting nearly 10% of the population. In the recent past many hypoglycemic agents are introduced, still the diabetes and the related complications continue to be a major medical problem not only in developed countries but also in developing countries. Many Indian medicinal plants are reported to be useful in diabetes. However, search for new antidiabetic drugs continue. Although the leaves and fruits of A. marmelos were studied widely for their antidiabetic activity (Narendrakannan et al., 2006; Kesari et al., 2006), the reports on antidiabetic activity of roots are limited. The present study was aimed at investigating the anti-diabetic effect of A. marmelos and identifying the active principles.

A. marmelos was collected from Kottakkal, Mallapuram district, Kerala during September 2007 and authenticated at the Botany Division, Centre of Medicinal Plants Research, Arya Vaidya Sala, Kottakkal, Kerala, where the voucher specimen is maintained.

About 20 g of air-dried root of the A. marmelos was powdered and refluxed with methanol for 8 hours over a water bath. The extract was filtered and concentrated under reduced pressure in a rotary evaporator below 50°C. The concentrated extract was dissolved in 10 mL of methanol and used for the gas chromatography analysis.

The fraction FC (100 mg) was subjected to column chromatography on 20 g of Si gel G and eluted with a mixture of n-hexane: Ethyl acetate (8:2). Fractions (5 mL each) were collected and pooled according to their similarity on analytical TLC plates and dried. Combined fractions 7-10 (1, 21 mg), 18-22 (2, 10 mg) were obtained. They were characterized by NMR and MS spectral data as 6-methyl-4-chromanone and skimmianine respectively.

An Agilent 6890N model GC gas chromatograph was used for the analysis. The analysis was performed as described elsewhere (Lampronti et al., 2003).

Colony bred, healthy Wister albino rats of either sex weighing 200-220 g were taken for the study. The animals were fed on standard laboratory diet with water ad libitum and housed at room temperature. The rats were kept of fasting overnight with free access to water during the experiment in the same ambience. The animals were divided into four groups of six animals each.

The volumes of all the test tubes were made up to 4 mL with distilled water to match the volume of the test tubes of group IV. Albino rats were tested overnight and killed by decapitation. The diaphragms were dissected out quickly with minimal trauma and divided into two halves. Two diaphragms from the same animal were not used for the same set of experiment. Six numbers of diaphragms were used for each group (Fr 1-8). The hemidiaphragms were placed in test tubes and incubated for 30 min at 37°C in an atmosphere of 100% oxygen with shaking at 140 cycles/min. Glucose uptake per gram of tissue was calculated as the difference between the initial and final glucose content in the incubated medium.

Fractions FB and FC were analyzed with TLC and found that there were two spots in the fractions FB and FC showing the same Rf value at 0.4 and 0.5. These two compounds 1 (13 mg) and 2 (9 mg) were isolated by column chromatography of the fraction FB  on Si gel G and eluted with a mixture of n-hexane: Ethyl acetate (8:2). The structure of the compounds (Figure 1) was elucidated using MS and 1H-NMR analysis.

Figure 1: Structures of compounds 1 and 2

The estimation of glucose content in rat hemidiaphragm is a commonly employed and reliable method for in vitro study of peripheral uptake of glucose.

Among the fractions tested the fractions FB and FC enhances the uptake of glucose by isolated rat hemidiaphragm significantly (p<0.001) and was found to be more effective than insulin. It appears that fractions FB and FC have direct peripheral action. Administration of A. marmelos fractions and insulin together was found to be less effective than A. marmelos fractions alone, but significantly higher than insulin treated group (p< 0.001). It appears that drug interaction could have occurred between A. marmelos fractions and insulin when given together. The control value of the glucose uptake by rat hemidiaphragm (5.7 ± 0.01) corresponds with the findings of Chattopadhyay et al.  (1992). Gas chromatography analysis indicated the presence of 6-methyl-4-chromanone, in the extract which matches with the results of Lampronti et al. (2003).

Our results suggest that 6-methyl–4-chromanone 1 and skimmianine 2 may be responsible for the in vitro antidiabetic effect.

The study was approved by the Ethical Committee. Animal experiments were carried out according to the law of Animal Experiments Guidelines approved by National Institute of Health (NIH). 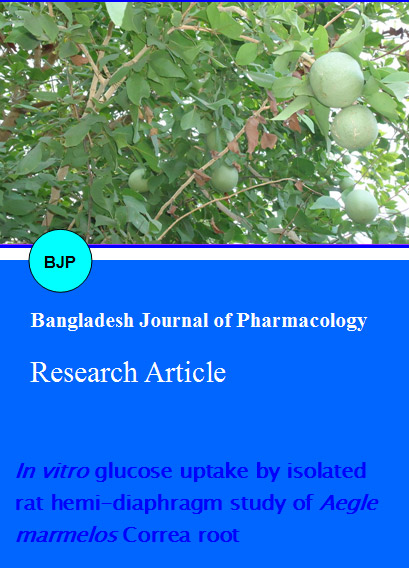