The bark of Xeromphis spinosa extracted by a mixture of equal proportions of petroleum ether, ethyl acetate and methanol at an oral dose of 200 and 400 mg/kg body weight exhibited significant anti-inflammatory activity when compared with control.

Inflammation is considered as a primary physiologic defense mechanism that helps body to protect itself against infection, burn, toxic chemicals, allergens or other noxious stimuli, an uncontrolled and persistent inflammation may act as an etiologic factor for many of these chronic illnesses (Kumar et al., 2004). Although it is a defense mechanism, the complex events and mediators involved in the inflammatory reaction can easily be induced (Sosa et al., 2002). The side effects of the currently available anti-inflammatory drugs pose a major problem during their clinical uses (Mattison et al., 1998). Therefore, the development of newer and more potent anti-inflammatory drugs with lesser side effects is necessary.

Xeromphis spinosa, known as emetic nut is distributed throughout India (Ghani, 2003; Kirtikar and Basu, 1980). Traditionally most of the plant parts are used therapeutically in the treatment of various diseases. The plant is known to have, aphrodisiac, antiemetic, antipyretic (Chevallier, 1996), carminative, alexiteric, anti-inflammatory, analgesic, antitumor and antiulcer activities (Kirtikar and Basu, 1980). Although the plant X. spinosa has traditionally been used in the treatment of various types of pain and inflammation in Bangladesh; no scientific report is available till date to validate these folkloric uses. As a part of our continuing studies on the medicinal plants of Bangladesh (Ahmed et al., 2001; Shrotriya et al., 2007), we now report on the anti-inflammatory activities of the extract of X. spinosa by carrageenin-induced paw edema method in Albino rats (Roy et al., 1980).

The bark of the plant X. spinosa (Rubiaceae) was collected from Gazipur in March 2006. The specimens of the plant were submitted to the herbarium of Botany Department, University of Dhaka and taxonomically identified and authenticated by the experts (voucher number: 007). The collected stem barks were washed, cut into small pieces and dried in the sun for about a week. After drying the plant materials were kept in an oven at 40ºC to ensure complete drying. The dried plant parts were finally ground into coarse powder (2.5 kg) and preserved in an airtight container for future use.

The coarse powder (2.5 kg) was macerated with a mixture of solvents (6 L) comprising of petroleum ether, ethyl acetate and methanol, in equal proportions (1:1:1), at room temperature for 3 days with occasional shaking and stirring. The extract was then first filtered off through a 2-fold fine cotton cloth and then with filter paper. The filtrate thus obtained was concentrated at 40ºC in a rotary vacuum evaporator to obtain a gummy, solid mass, which was subsequently defatted by the method mentioned earlier (Ahmed et al., 2001).

Long Evans rats of either sex, weighing 120-180 g were used. They were purchased from the animal resource branch of ICDDR, B. The animals were kept in standard environmental condition, given standard rodent food (ICDDR, B formulated) and water ad libitum.

Screening for anti-inflammatory activity of X. spinosa extract was done with a carrageenin induced paw edema model (Winter et al., 1962). Administration of carrageenin in the subplantar region of rat’s hind paw leads to the formation of edema in situ due to localized inflammation. About half an hour prior to the administration of carrageenin solution, experimental animals received test materials and standard anti-inflammatory drug at appropriate doses. The volume of rat paw was measured each hour up to four hours by means of mercury displacement method in traveling microscope assembly (Roy et al., 1980). The average percent increase in paw volume with time was calculated and compared against the control group. Percent inhibition was calculated using the formula.

Twenty-four experimental animals were randomly selected and divided into four groups denoted as Group I, II, III and IV, consisting of 6 mice in each group. Each group received a particular treatment i.e. control, positive control and the two doses of the extract. Prior to any treatment, each rat was weighed properly and the doses of the test samples and control materials were adjusted accordingly. Group III and VI received the crude extract orally at the doses of 400 and 200 mg/kg of body weight respectively. Group II received intraperitoneal administration of phenylbutazone (PBZ) as standard anti-inflammatory drug at a dose of 100 mg/kg body weight while Group I was kept as control giving 1% Tween 80 in normal saline water. After one hour of drug administration, 0.1 ml of 1% (w/v) carrageenin solution in sterile saline solution was injected through 26 gauge needle into the subplanter surface of the right hind paw of each rat of every group. Paw volumes were measured up to a fixed mark by mercury displacement as viewed by traveling microscope at 1, 2, 3 and 4 hours after the administration of the standard drug and test extracts.

Values reported are expressed as mean ± SE and analyzed for ANOVA followed by Student’s t-test. A value of p<0.001 was regarded as significant. Table I: Measurement of hind paws volume (x1,000) at different time intervals after the administration of crude extract of Xeromphis spinosa (n = 6)

It is clearly evident from the study that an equal proportions mixture of petroleum ether, ethyl acetate and methanolic bark extract of X. spinosa exhibit significant anti-inflammatory effect in albino rats. Results of two doses are also comparable with standard drug (phenylbutazone). All the above results support the traditional uses of bark.

The abdominal constriction response induced by acetic acid is a sensitive procedure to establish peripherally acting analgesics. The response is thought to involve local peritoneal cells and is mediated by the prostaglandin pathways (Ronaldo et al., 2000). The extract of X. spinosa showed significant antinociceptive activity, indicating the presence of anti-inflammatory principles that might be intervening with the prostaglandin pathways. The carrageenan-induced paw edema in rats is believed to be biphasic (Vinegar et al., 1969). The first phase is due to the release of histamine or serotonin, and the second phase is caused by the release of bradykinin, protease, prostaglandin, and lysosome (Crunkhorn and Meacock, 1971). Therefore, it can be assumed that the inhibitory effect of the extract of X. spinosa on carrageenan-induced inflammation could be due to the inhibition of the enzyme cyclooxygenase, leading to the inhibition of prostaglandin synthesis.

The extract of X. spinosa has significant anti-inflammatory properties, and it justifies the traditional use of this plant in the treatment of various types of pains and inflammation. 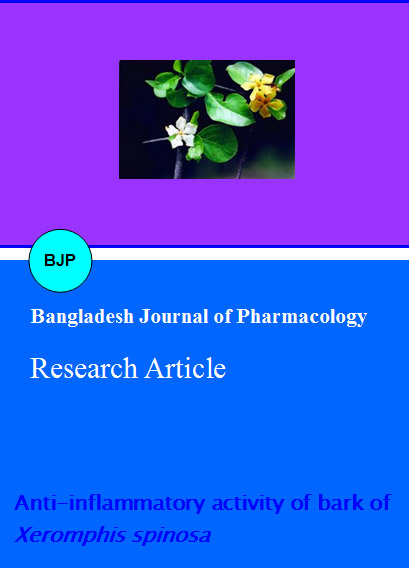