Gymnema lactiferum var. lactiferum is a climber distributed in many South Asian countries. It is reported that the diabetic patients in Sri Lanka use G. lactiferum leaves as a treatment for diabetes. However, scientific data is not available on this plant. A clinical trial was conducted including 26, type 2 diabetic patients with hypercholesterolemia. The treatment group received a suspension of G.  lactiferum leaf powder twice daily for  four weeks. Blood parameters of both groups (treated and control) were determined at the beginning and the end of the study period. Study indicates significant effects on fasting blood sugar (p=0.002), cholesterol (p=0.004), and LDL lowering (p= 0.023) and a significant postprandial glucose lowering effect (p=0.026 for 60 min and p=0.022 for 120 min, after four weeks). In spite of the short study period, a significant reduction (p=0.012) in HbA1C levels was also observed.

Gymnema lactiferum var. lactiferum is a woody branched climber which belongs to the family Asclapiadaceae. It is known as “Kurincha” in Sinhala and “Kshirakakoli” in Sanskrit. The plant is distributed in Assam, Malay Peninsula, Malaysia and Sri Lanka (Dassanayake and Fosberg, 1983).

The leaves of G. lactiferum are used as a green leafy vegetable in salads, curries and in herbal gruels. Further it has been reported that G. lactiferum leaves possess cooling, anabolic, rehydrating, spermiogenic (Ayurveda Pharmacopia, 1961) and wormicide properties (forlkloric). G. lactiferum leaves have been used as a supportive treatment for diabetes by people in Jaffna, Sri Lanka for several decades.

The present report describes the effects of this plant material on glycemic and lipidemic status of type 2 diabetic patients. No scientific studies on this plant have been found in the literature.

Identification, collection and preparation of the leaf powder

The plant was identified at the National Herbarium, Sri Lanka. Plants were grown in Jaffna, Sri Lanka. They were grown with organic composts avoiding the use of synthetic fertilizers, insecticides and fungicides. After washing, mature leaves were dried hygienically in sunlight for 4-5 days within an enclosure covered with a glass roof. After grinding and sieving, the leaf powder was packed into 100 g packets.

Patients were selected from the Out-Patient Wing of the Bangladesh Institute for Research and Rehabilitation in Diabetes Endocrine and Metabolic Disorders (BIRDEM), Dhaka.

Diabetes was diagnosed according to WHO (1999) criteria. Hypercholesterolemia was detected according to the lipid profile levels of the patients. Type 2 diabetic patients (n = 12, age 30-60 years) with hypercholesterolemia were included in the test group. Patients of more than 60 years of age, suffering from serious recurrent illnesses, hypertension or any other endocrinological diseases were excluded from the study. Patients with a serum creatinine level of more than 1.7 mg/dL and the patients on any dislipidemic drug were also excluded. Another group of type 2 diabetics (n = 14) with hypercholesterolemia served as the control group.

Informed consent of each patient was obtained after explaining the purpose and the procedure of the study. Patients had to fulfill four visits (one visit/week) during the study period. Body weights were recorded on the day zero and on the 29th day. Patients complaints (if any) on gastric discomfort, generalized weakness, headache, vertigo, twingling sensation of the limbs, nausea, drowzyness, dryness of mouth, anorexia and flatulence etc. were recorded during each visit.

Fasting blood samples of 10 mL were drawn from the antecubital vein (0 hour). The test group patients received a suspension of G.  lactiferum leaf powder (3.5 g dissolved in 30 mL of water) before their breakfast which was supplied according to their diet charts.  Blood samples were drawn at 1 and 2 hours time intervals.  Patients were provided with individual leaf powder doses (wrapped in a paper pack and sealed in a polythene bag) for the rest of the week. They were requested to take the preparation just before breakfast and just before dinner each day for one month.

Fasting blood (1 mL) was transferred in an EDTA containing tube to be used in the determination of HbA1C. The rest of the blood was centrifuged at 4,000 rpm for 10 min and serum was transferred to new Eppendorff tubes and recentrifuged at 3,000 rpm for 5 min and the supernatant was separated. Serum samples were analyzed for fasting glucose, serum total cholesterol, triglyceride, HDL-cholesterol, SGPT and creatinine. The same procedure was followed on the last day where the above biochemical parameters were tested.

All 26 patients enrolled in the study had similar baseline characteristics (Table I). All patients were on oral hypoglycemic agents but any dose adjustments were not made during the study. Since it was not possible to conduct a double blind experiment, the patients were aware of who were the tests and who were the controls. The patients were expected to continue their normal dietary habits. However, control patients were reported to follow dietary controls. Despite this, G. lactiferum therapy indicated many beneficial effects on the glycemic and lipidimic status of the patients.

Table I: Baseline characteristic of the patients included in the study

The effect of G. lactiferum leaf powder on fasting serum glucose levels has been shown in Table II. A gradual reduction was observed in the Gymnema treated group. There was a 10.7% reduction on day 15. The reduction became significant (p= 0.002) on day 29 (with an 18.2% reduction).

As shown in Table III there were significant reductions (p= 0.026 for 60 min and p= 0.022 for 120 min) in postprandial serum glucose levels in the Gymnema treated group on day 29 in comparison to day zero.

The serum total cholesterol levels of the Gymnema treated group reduced significantly (p= 0.004) by the 29th day (Table IV). There was a 12.3% reduction in comparison to the day zero value. However, the serum HDL levels remained steady (p= 0.417) throughout the study period. As shown in Table IV, there was a significant reduction (p= 0.023) in the serum LDL levels in the Gymnema treated group on day 29 in comparison to day zero. The reduction was 15.5%. However, this therapy did not produce any significant reduction (p= 0.380) in serum triglyceride levels (Table IV).

Although G. lactiferum leaf powder did not produce any acute blood glucose lowering effect, its chronic consumption led to a gradual reduction in FBS and after four weeks of treatment the reduction was significant (p= 0.002). The patients of both groups were on their conventional oral hypoglycemic drugs. Therefore this indicates the added advantage of G. lactiferum therapy on the patient’s glycemic status. Though the postprandial blood glucose (PPG) levels did not show any significant reduction in the acute experiments, after treating the patients with leaf powder for four weeks their PPG levels went down significantly in comparison to day zero levels. This suggests that the leaf powder could overcome postprandial hyperglycemia which is one of the major causes for the initiation and progression of many diabetic complications. Further the chronic consumption of leaf powder produced a significant decline (p=0.004) in serum total cholesterol levels and serum LDL levels (p=0.023). However, there was no significant changes in serum HDL (p=0.417) and TG (p=0.380). The insignificant serum ALT (p=0.261) and creatinine (p=0.797) levels indicated that there was no detrimental effects on the liver and kidneys of the patients.

The body weights of patients’ did not show significant changes (p=0.089) throughout the study period. No complaints were made by the patients while consuming the leaf powder. Some patients had a history of generalized weakness, gastric discomfort and constipation prior to the treatment. All the above complaints were alleviated and gradually subsided while being fed on the leaf powder.

From the data obtained it could be concluded that G. lactiferum leaf powder possesses pronounced hypoglycemic effects and favorable effects on the lipid profiles on type 2 diabetic patients and it would therefore make a good functional food. The hypoglycemic effect may be due to stimulation of insulin secretion, enhancement of the activity of insulin or inhibition of glucose absorption.

The hypocholesterolemic effect may probably be due to the indirect effect of lowering of blood glucose or due to any other active principle which can inhibit cholesterol synthesis or increase cholesterol or bile salt excretion.

The study was approved by the Ethical Committee of the Institute.

Authors are grateful to the technical staff of the Research Division, Bangladesh Institute for Research and Rehabilitation in Diabetes Endocrine and Metabolic Disorders (BIRDEM) for their help.

Friedewald WT, Levy RI, Fedrickson DS. Estimation of the concentration of low-density lipoprotein cholesterol in plasma, without use of the preparative ultracentrifuge. Clin Chem. 1972; 18: 499-502. 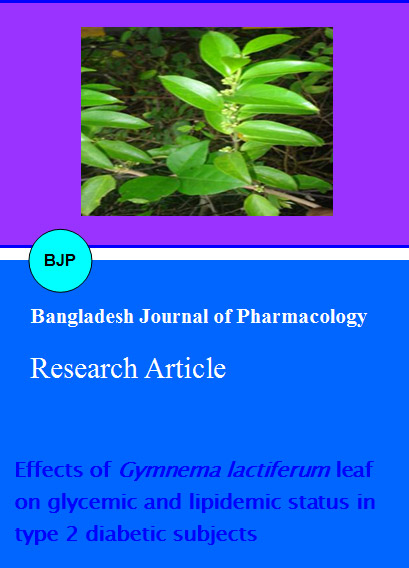