Coccinia grandis (Cucurbitaceae) has extensively used to get relief from asthma and cough by the indigenous people of India. The antitussive effect of aerosols of two different concentrations (2.5%, 5% w/v) of methanol extract of C. grandis fruits were tested by counting the numbers of coughs produced due to aerosols of citric acid, 10 min after exposing the male guinea pigs to aerosols of test solutions for 7 min. In another set of experiment methanol extract was investigated for its therapeutic efficacy on a cough model induced by sulfur dioxide gas in mice. The results showed significant reduction of cough number obtained in the presence of both concentrations of methanol extract as that of the prototype antitussive agent codeine phosphate. Also, methanol extract exhibited significant antitussive effect at 100, 200 and 400 mg/kg, per orally by inhibiting the cough by 20.6, 33.7 and 56.7% within 90 min of performing the experiment respectively.

The plant has been extensively used in Ayurvedic and Unani practice in the Indian subcontinent (Chopra et al., 1956; Varier and Sala, 1994). The entire plant is reported to use for the treatment of syphilis, sores and bacterial infections (De Boer et al., 2005). The plant also possesses potent antidiabetic (Kumar et al., 1993; Singh et al., 1985; Mukerjee et al., 1972) and antidyslipidemic activity (Singh et al., 2007). Indigenous people use various parts of the plant to get relief from asthma and cough (Varier and Sala., 1994). To substantiate its activity against cough and cold attack, the present study was designed to investigate the effect of C. grandis fruit extract on irritant aerosol-induced coughing in male guinea pigs (Forsberg et al., 1988) and sulfur dioxide-induced cough reflex in mice (Miyagoshi et al., 1986).

The fruits of C. grandis were collected from Birla Institute of Technology, Mesra campus, Ranchi during September, 2006. The plant materials were identified by the Department of Natural Products, Regional Research Laboratory, Bhubaneswar, India. A voucher specimen [No. CNH/1-1 (44)] had been kept in our laboratory for future reference. The fruits were shade-dried, powdered, passed through a 40-mesh sieve and finally subjected to extraction with methanol in a soxhlet apparatus. The solvent was removed under vacuum and a solid mass (15.3% w/w with respect to dry starting material) so obtained was stored in a desiccator and used for further experimental studies. The methanol extract of the fruit was subjected for preliminary phytochemical screening to show the presence of steroid, alkaloid, glycoside, tannin, triterpenoid, carbohydrates and reducing sugar.

The experiments were carried out in male guinea pigs (400-450 g) and Swiss albino mice (30-40 g) of either sex. Animals were kept in the animal house at 26 ± 2°C at relative humidity 44–55% and light-dark cycles of 10 and 14 hours, respectively. Animals were provided with rodent diet and water ad libitum.

Guinea pigs, five in each group, were used in the study by the method described elsewhere (Forsberg et al., 1988). Unanesthetized and unrestrained animals were placed individually in a transparent perspex chamber, dimensions 30 × 20 × 20 cm and exposed to a nebulized aqueous solution of i.e. 0.1 g/mL of citric acid for 7 min. The aerosol was produced by airflow of 8 L/min through a Wright nebulizer. The aerosol particles had a mass median aerodynamic diameter of 0.9 µm. The output of nebulizer was 0.7 ± 0.04 mL solution per min and continued for 7 min. The same nebulizer was used throughout the experiment. During the last 5 min of the exposure, the animals were watched continuously by a trained observer, and the numbers of coughs were determined. Coughs could easily be distinguished from sneeze since there was a clear difference in sound as well as in behavior of the animals (Forsberg et al., 1988).

The above protocol was performed 10 min after exposing animals to aerosols of the following solutions for a period of 7 min (n=5): a) normal saline (baseline measurement); b) codeine solution (0.03 g/mL, positive control); c) 2.5% methanol extract; d) 5% methanol extract.

All the experiments were performed randomly with 2 hours resting period between each two experiments.

Antitussive effect against sulfur dioxide-induced cough was evaluated by the method as described by Miyagoshi et al., 1986. The experimental model is shown in Figure 1, where, V1 is 500 mL three-necked flask containing aqueous saturated solution of sodium hydrogen sulfite. By opening the stopcock of a burette V2, the concentrated sulfuric acid was introduced to generate sulfur dioxide gas. The chemical reaction that occurred in the flask A is:

Previously, SO2 gas was filled in V1 and V3 gas reservoirs, and then by opening the cocks 3 and 2, pressure in the gas reservoir V3 was elevated which was recorded by the water manometer V4. Then the stopcock 2 was closed and stopcock 4 was opened slightly till the pressure in V4 (11 mm i.d.) reached 75 mm water, when the stopcock was closed. The procedure was operated in a draught.

The mice were divided into five groups, each containing 10 mice. One group served as a control group receiving only 2% v/v aqueous Tween 80 solution (10 mL/kg, per orally). Three groups were used for methanol extract of fruits (100, 200 and 400 mg/kg per orally) and the remaining group was used for standard drug codeine phosphate (10, 20 and 40 mg/kg per orally). Both the extract and codeine phosphate were suspended separately in 2% v/v aqueous Tween 80 solution. Initially, the cough responses of all groups of animals were observed (0 min) by placing the animals individually in a desiccator V5. The cocks 3, 6 and 5 were opened in order and when the pressure in V4 became 0 mm of water, all the cocks were closed immediately. A certain amount of SO2 gas (5 mL which was kept constant throughout the experiment) was introduced in the desiccator in this way. After 1 min of introduction of the gas, the mice were taken out of the desiccator and the frequency of cough was observed for 5 min in an open-ended filter funnel with a stethoscope at the tip in which the mice were confined. In this way the frequency of cough was observed for all animal groups at 0 min (before the drug administration) and at 30, 60, 90, 120 min interval (after the drug administration).

The frequency of cough produced by irritant-aerosol in guinea pigs were analyzed by one-way ANOVA followed by Bonferroni's multiple comparison tests to compare all pairs of columns. The results are expressed as means ± standard error of  mean (S.E.M.). The data obtained from sulfur dioxide-induced experiment were analyzed by one-way ANOVA followed by Dunnett’s test for comparing between the control group and the various groups. Statistical significance was assumed at the 0.05 levels. The effect of C. grandis extract on sulfur dioxide-induced cough in experimental animals is shown in Table I. It was observed that on exposure of the experimental animals (mice) to sulfur dioxide gas, the frequency of cough of control group remains more or less constant, i.e. it varies between 57.6 ± 0.2 and 62.9 ± 0.3 (mean ± SEM). But both in case of codeine phosphate and extract of C. grandis on oral administration, frequency of cough decreased in a dose-related manner. It was found that both the standard drug and extract (at different doses) produce maximum inhibition of cough reflex at 90 min after drug administration. A dose-dependent inhibition of cough was observed with methanol extract and results were also comparable with the effect produced by codeine phosphate, a prototype antitussive agent. The results obtained with 100, 200, and 400 mg/kg doses of extract were statistically significant (p<0.01) throughout the time span of the experiment. The highest inhibition of cough (56.7%) was produced by the extract of the 400 mg/kg dose level at 90 min of the experiment, whereas codeine phosphate (40 mg/kg) showed maximum 73.0% inhibition. The percentage inhibition of cough in codeine phosphate was 68.5-70.5% between 30 min to 120 min at the high (40 mg/kg) concentration which was comparatively higher than other two groups (10, 20 mg/kg) i.e. 29.7-38.2%, 48.5-59.7% respectively. Whereas methanol extract at 400 mg/kg caused 51.4- 46.5% cough inhibition between 30-120 min. The other two concentrations of extracts (100, 200 mg/kg) inhibited 6.7-6.6% and 31.2-25.7% respectively.

Table I: Effects of Coccinia grandis methanol extract and codeine phosphate on the cough induced by sulfur dioxide gas in mice

Coughing is a normal physiological response to an irritation of the laryngo-tracheobronchial system caused by mechanical or chemical stimulation. It may be painful and fatiguing and require suppression by antitussive drugs. In animals, coughing has been elicited by mechanical (Tedeschi et al., 1959) or chemical irritation (Turner, 1968) and by electrical stimulation (Cavanagh et al., 1976) of tracheal mucosa or by nerve stimulation (Pickering and James, 1979). Of all these methods, chemical or mechanical stimulation are more similar to the physiological event and also the experimental models generally used in man.

In the present study, the antitussive activity of methanol extract has been compared with that of codeine against coughing-induced in two different animal species by chemicals stimulation (irritant citric acid aerosol and sulphur dioxide gas) stimulation. The extracts showed marked antitussive effect. The extract showed significant inhibition of cough like the standard drug (codeine phosphate) in dose-dependent manner; thus the extract might be acting via the central nervous system, but the exact mechanism of action can not be withdrawn from the preliminary study.

The extract of C. grandis produced a significant antitussive effect and thus established the claim of using the plant as an anti-cough agent in ancient folklore medicine.

The animal experiment was performed according to the institute’s Ethical Committee approval and guidelines Registration No. 621/02/ac/CPCSEA of Birla Institute of Technology, Mesra, India. 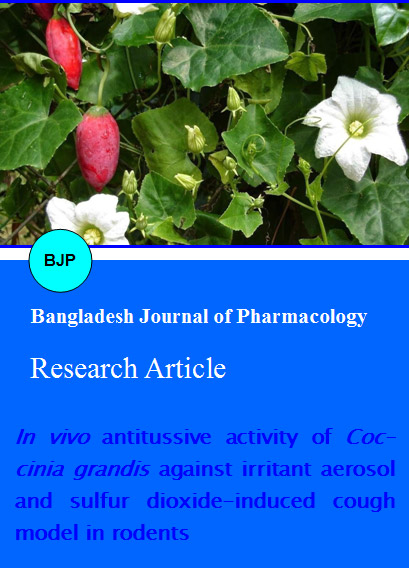