The leaves were cut into small pieces and shed dry and then ground into coarse powder for the maceration process with methanol at room temperature. After exhaustive extraction, the methanol extract was concentrated under reduced pressure at 50-55°C and stored in a vaccum desiccator. The suspension of the extract prepared in 2% gum acacia was used in the entire experimental studies.

The methanol extract was screened for the presence of various phytoconstituents like steroids, alkaloids, terpenoids, glycosides, flavonoids, phenolic compounds and carbohydrates (Trease and Evan, 1983).

The hot plate test was used to measure analgesic activity by the method described by Eddy and Leimback (1953) with minor modifications. In this experiment, the hot plate was maintained at 55 ± 0.5°C. All animals were selected 24 hour prior to experimentation and the animals were selected on the basis of their normal reaction time i.e., pain response to the hot plate to the minimum and maximum of 2-15 sec respectively. In order to avoid the damage to the paws of the animals, the time standing on the plate was limited to 20 sec. Pentazocine 10 mg/kg was administered intraperitoneally as a reference standard. 30 min after administration of vehicle (2% gum acacia)/methanol extract (200 and 400 mg/kg)/standard drug, animals were placed individually on to the hot plate and the time from placing the animal on the hot plate to jumping of the animal from the hot plate was recorded as the reaction time or latency of the pain response.

Abdominal construction induced by intraperitoneal injection of acetic acid was carried out according to the procedures described previously (Koster et al., 1959). The leaf extract of K. calycina was tested at 200 and 400 mg/kg. Diclofenac sodium, a reference anti-inflammatory and analgesic compound, was used at 20 mg/kg. The extract and reference drug were administered orally 30 min before the administration of 0.7% acetic acid in a volume of 10 mg/kg i.p. Control animals received 2% of gum acacia under the same experimental condition. Immediately after injection of the acetic acid, each animal was isolated in an individual cage and the normal construction was cumulatively counted for a period of 20 min, beginning 3 min after acetic acid injection. The number of writhing and stretching was recorded and the % was calculated using the following ratio: % of protection= (Control mean—Treated mean)/Control mean x 100

The normal paw volumes of all the rats were measured initially and were divided into four groups each consists of six animals treated orally with the vehicle as control (2% gum acacia), standard diclofenac sodium (20 mg/kg) and methanol extract (200 and 400 mg/kg) respectively. Carrageenan (0.1 mL of a 1% suspension in saline) was injected sub plantar region of the right hind paw of each rat. The vehicle, drug and extract were administered 30 min prior to the injection of Carrageenan. The paw volumes of all the rats were recorded at 1, 2, 3 and 4 hours after Carrageenan treatment by using plethysmometer (Winter et al., 1962). A significant reduction in the paw volume compared to vehicle treated control animals was considered as inflammatory response.

V0 = paw volume of the rat before administration of Carrageenan

Preliminary phytochemical screening of the methanolic extract of K. calycina reveals the presence of steroids, terpenoids, carbohydrates and glycosides.

In this study, we have demonstrated the effect of extract (200 and 400 mg/kg; p.o.) on hot plate test and acetic acid induced writhing in mice. The results of hot plate test and acetic acid induced writhing test were shown in Table I and II. The extract (200 and 400 mg/kg) showed the significant increase in reaction time and reduction in the number of writhes induced by acetic acid in a dose-dependent manner which were comparable with reference compounds, diclofenac and pentazocine respectively. A significant (p<0.0005) analgesic effect to the thermal stimulus was observed at 60 min with 200 and 400 mg/kg of K. calycina which is comparable to the effect of standard pentazocine. The mouse writhing assay is useful test to evaluate mild analgesic agents. This method is not only simple and reliable but also affords rapid evaluation of peripheral type of analgesic action. In this test the animals react with characteristic stretching behavior, which is called writhing. Acetic acid causes algesia by liberating endogenous substances including serotonin, histamine, PGs, bradykinin and substance P which stimulate pain nerve endings (Ochi et al., 2000). Local peritoneal receptors are postulated to be partly involved in the abdominal constriction (writhing) response.

Table I: Effect of methanol extract of K. calycina on the hot plate test in mice

The method has been associated with prostanoids in general, i.e. increases levels of PGE2 and PGF2α  in peritoneal fluids as well as lipoxygenase products (Ochi et al., 2000). It was found that extract significantly inhibited the acetic acid induced writhing response. The abdominal constriction is related to the sensitization of nociceptive receptors to prostaglandins. It is therefore possible that extract produced analgesic effect may be probably due to the inhibition of synthesis or action of prostaglandin.

Carrageenan-induced rat paw edema is a suitable test for evaluating anti-inflammatory drugs which has frequently been used to assess the anti-edematous effect of natural products (Panthong et al., 2003). Development of edema in the paw of the rat after injection of carrageenan is a biphasic event. The initial phase observed during the first hour is attributed to the release of histamine and serotonin. The second phase of edema is due to the release of prostaglandins, protease and lysosome (Vinegar et al., 1969; Crunkhon and Meacock, 1971). Based on this, it could be argued that the suppression of the first phase may be due to inhibition of the release of early mediators, such as histamine and serotonin, and the action in the second phase may be explained by an inhibition of cyclooxygenase. Sub plantar injection of carrageenan in rats showed to a time-dependent increase in paw thickness (Table III); this increase was observed at 1 hour and was maximal at 3 hours after administration of carrageenan injection in the vehicle treated groups. The results of MEKC against Carrageenan induced paw edema is shown in Table III. There was a dose-dependent inhibitory activity in Carrageenan induced paw inflammation at all assessment times. Diclofenac sodium, a COX-inhibitor at the dose of 20 mg/kg, p.o. significantly reduced the paw edema. This indicates action against release of histamine, serotonin and kinins in early phase, while later phases are suspected to be arachidinate metabolites producing an edema-dependent on mobilization of neutrophils (Just et al., 1998). The result of the present study indicates that PG (200 and 400 mg/kg, p.o.) and indomethacin play a crucial role as protective factors against the carrageenan-induced acute inflammation.

Table III: Effect of methanol extract from K. calycina on the paw edema test in rats

This study demonstrates that the methanol extract of K. calycina has a significant analgesic and anti-inflammatory activity.

Experiments on animals were performed in accordance with guidelines of the Institutional Animal Ethical Committee. 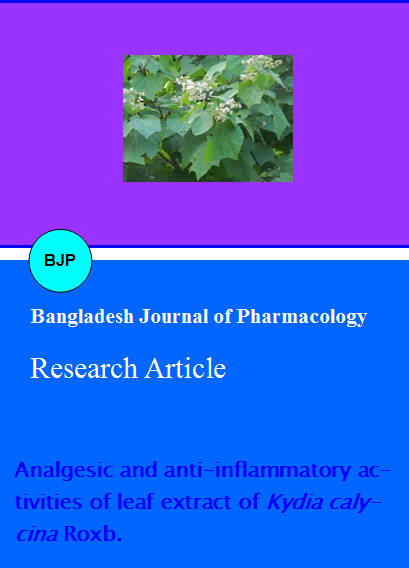