Snakebite is a major health hazard that leads to high mortality rate especially in India. The common poisonous snakes found in India are cobra (Naja naja), krait (Bangarus Caeruleus), Russell’s viper (Daboia russelli) and saw scaled viper (Echis Carinatus) (Bawaskar, 2004).  About 35,000 to 50,000 people die of snakebite every year in India. The venoms of cobra and krait of Elapidae family are neurotoxic in nature, considered to attack victim’s central nervous system and usually results in heart failure. Their venom constitutes three types of proteins namely cardiotoxins, neurotoxins and phospholipase A2 which are responsible for various toxic activities in patients with snakebite. Antivenom immunotherapy is the only specific treatment against snake venom envenomation. There are various side effects of antivenom such as anaphylactic shock, pyrogen reaction and serum sickness. Most of these symptoms may be due to the action of high concentrations of non-immunoglobulin proteins present in commercially available hyper immune antivenom (Devi et al., 2002). Over the years many attempts have been made for the development of snake venom antagonists especially from plants sources. Several medicinal plants, which appear in old drug recipes or which have been passed on by oral tradition, are believed to be snakebite antidotes. Many Indian medicinal plants are recommended for the treatment of snakebite (Alam et al., 2003). Some of these plant extracts has shown antivenom property on land snakes and their possible mechanism of action have been suggested. In almost any part of the world, where venomous snakes occur, numerous plant species are used as folk medicine to treat snakebite. The present investigation explored the cobra and krait venom neutralizing activity of Mimosa pudica plant extracts by in vivo and in vitro methods.

Medicinal plant and preparation of extract

M. pudica plants were collected from Nehru Gardens of Nehru Arts and Science College. The extraction was carried out by the method of Uhegbu et al. (2005) using distilled water as the solvent. 20 g of powdered sample of the herb was extracted by soaking in 180 mL of distilled water in a beaker, stirred for about 6 min and left overnight. Thereafter, the solution was filtered using filter paper (Whatman No. A1) and the extracts were evaporated to dryness under reduced pressure below 40°C. The plant extracts were expressed in terms of dry weight.

The median lethal dose (LD50) of cobra and krait venom was determined according to the method developed by Theakston and Reid, 1983. Various doses of venom in 0.2 mL of physiological saline was injected into the tail vein of mice (18-20 g), using groups of 3-5 mice at each venom dose. The LD50 was calculated with the confidence limit at 50% probability by the analysis of deaths occurring within 24 hours of venom injection. The anti-lethal potentials of M. pudica plant extracts were determined against 2LD50 of cobra and krait venom. Various amount of plant extracts (μL) were mixed with 2LD50 of venom sample and incubated at 37°C for 30 min and then injected intravenously into mice. 3-5 mice were used at each antivenom dose. Control mice received same amount of venom without antivenom (plant extracts). The median effective dose (ED50) calculated from the number of deaths within 24 hours of injection of the venom/antivenom mixture. The ED50 was expressed as μL antivenom/mouse and calculated by probit analysis.

The minimum edema-forming dose (MED) of cobra and krait venom was determined by the method of Lomonte et al. (1993) and Camey et al. (2002). The MED was defined as the least amount of venom which when injected subcutaneously into mice footpad results in 30% edema with in 6 hours of venom injection. The thickness of each footpad was measured every 30 min after venom injection with a low-pressure spring caliper (Rojas et al., 2005). The ability of M. pudica extract in neutralizing the edema-forming activity were carried out by pre-incubating the constant amount of venom and various dilutions M. pudica plant extracts and incubated for 30 min at 37°C. Then, groups of four mice (18-20 g) were injected subcutaneously in the right footpad with 50 mL of the mixtures, containing venom/plant extracts, whereas the left footpad received 50 mL of PBS alone. Control mice were injected with venom in the right footpad and 50 mL of PBS in the left footpad. 1 hour after injection edema was evaluated as described by Yamakawa et al., 1976. Edema was expressed as the percentage increase in thickness of the right footpad compared to the right footpad of the control mice.

The minimum hemorrhagic dose (MHD) of cobra and krait venom was determined by the method described by Theakston and Reid, 1983. The minimum hemorrhagic dose was defined as the least amount of venom which when injected intradermally into mice results in a hemorrhagic lesion of 10 mm diameter in 24 hours. Neutralization of the hemorrhagic activity was estimated by mixing a fixed amount of venom with different amounts plant extracts. The plant extract–venom mixture was incubated at 37°C for 1 hour and 0.1 mL of the mixture was injected intradermally into mice. The hemorrhagic lesion was estimated after 24 hours.

Phospholipase A2 activity was measured using an indirect hemolytic assay on agarose–erythrocyte–egg yolk gel plate by the methods described by Gutierrez et al., 1988. Increasing doses of cobra and krait venom (µg) was added to 3 mm wells in agarose gels (0.8% in PBS, pH 8.1) containing 1.2% sheep erythrocytes, 1.2% egg yolk as a source of lecithin and 10 mM CaCl2. Slides were incubated at 37°C overnight and the diameters of the hemolytic halos were measured. Control wells contained 15 μL of saline. The minimum indirect hemolytic dose (MIHD) corresponds to a dosage of venom, which produced a hemolytic halo of 11 mm diameter. The efficacy of M. pudica extract in neutralizing the phospholipase activity was carried out by mixing constant amount of venom (µg) with different amount of plant extract (µL) and incubated for 30 min at 37°C. Then, aliquots of 10 mL of the mixtures were added to wells in agarose-egg yolk-sheep erythrocyte gels. Control samples contain venom without plant extracts. Plates were incubated at 37°C for 20 hours. Neutralization expressed as the ratio mg antibodies/mg venom able to reduce by 50% the diameter of the hemolytic halo when compared to the effect induced by venom alone.

The procoagulant activity was done according to the method described by Theakston and Reid, 1983 modified by Laing et al., 1992. Various amounts of venom dissolved in 100 µL PBS (pH 7.2) was added to human citrated plasma at 37°C. Coagulation time was recorded and the minimum coagulant dose (MCD) was determined as the venom dose, which induced clotting of plasma within 60 sec. Plasma incubated with PBS alone served as control. In neutralization assays constant amount of venom was mixed with various dilutions of M. pudica extracts. The mixtures were incubated for 30 min at 37°C. Then 0.1 mL of mixture was added to 0.3 mL of citrated plasma and the clotting times recorded. In control tubes plasma was incubated with either venom alone or plant extracts alone. Neutralization was expressed as effective dose (ED), defined as the ratio mL antivenom (plant extracts)/mg venom at which the clotting time increased three times when compared with clotting time of plasma incubated with two MCD of venom alone.

A modified plaque assay was used (Rojas et al., 1987). The minimum fibrinolytic concentration was defined as the concentration of venom that induced a fibrinolytic halo of 10 mm diameter. Neutralization experiments were performed by incubating a constant amount of venom with varying amount of M. pudica plant extracts at 37°C for 1 hour. After incubation, the mixture was applied to the wells in the plaque. After 18 hours of incubation at 37°C, fibrinolytic halos were measured.

In edema forming activity, the mice immunized with cobra and krait venoms showed increase in footpad thickness. About 7 μg of cobra and 7 μg of krait venom induced edema formation within 3 hours which is considered as 100% activity. The edema was reduced up to 30% when 2.5 mg of plant extract  per mg venom was given. There was no further reduction in the percentage of edema even when there was an increase in antivenom dose (Figure 1). The MCD was determined as the venom dose inducing clotting of plasma in 60 sec. About 60  μg of cobra and krait venom clotted human citrated plasma within 60 sec. In the neutralization assay, the absence of clot formation shows the neutralizing ability of both plant extracts. We found that 1.4 mg of M. pudica plant extracts were able completely to neutralize coagulant activity. High dose of venom caused rapid clotting that required very high dose of antivenom to neutralize. The fibrinolytic effect was effectively antagonized by the M. pudica plant extract. The ED50 of M. pudica were found to be 0.7 and 0.9 mg for cobra and krait  respectively.

The main conclusion of this study is that the present experimental results show that M. pudica plant extract was effective in neutralizing the main toxic effects of the cobra and krait venoms. The potency of the antivenom antibodies can still increase with the use of highly purified plant extracts.

Institutional Animal Ethics Committee clearance at Institute of vector control and Zoonooses, Hosur, was obtained to conduct the experiment

Acknowledgment
The authors would like to thank the Head, Department of Botany, S. P. M. M. Baramati, Pune, MS, for the identification of the plant

Camey KU, Velarde DT, Sanchez EF. Pharmacological characterization and neutralization of the venom used in the production of Bothropic antivenom in Brazil. Toxicon 2002; 40: 501-09. 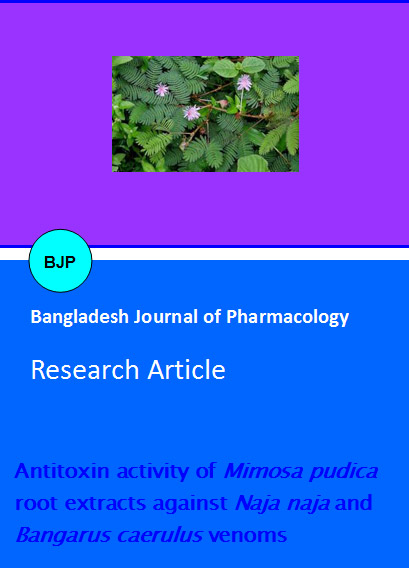