Studies on the antidiabetic effects of Mangifera indica stem-barks and leaves on nondiabetic, type 1 and 2 diabetic model rats

Mangifera indica Linn, locally known as mango tree has been claimed to possess antidiabetic properties by many investigators. The present study was undertaken to screen the hypoglycemic and antihyperglycemic activity of both ethanol and water extracts of leaves and stem-barks of M. indica in nondiabetic and diabetic model rats in different prandial state. The results showed that all of the extracts had significant antihyperglycemic effect in type 2 diabetic model rats when fed simultaneously with glucose load (p<0.05-0.01; p<0.005-0.001). Moreover, the ethanol extract of stem-barks showed significant antihyperglycemic effect when the extract was fed 30 min prior to the glucose load (p<0.01). Investigations were carried out to evaluate the effect of M. indica on glucose absorption using a rat intestinal preparation in situ. The ethanol extracts of stem-barks reduced glucose absorption gradually during the whole perfusion period in type 2 diabetic rats.

Diabetes mellitus is ranked seventh among the leading causes of death and third when it’s fatal complications are taken into account (Trivedi et al., 2004). Traditional preparations of plant sources are widely used almost everywhere in the world to treat this disease. Therefore, plant materials are considered to be the alternative sources for finding out new leads for hypo-/antihyperglycemic agents.

Following a standardized procedure (Ali et al., 1993) antidiabetic plant materials are being screened in BIRDEM for their hypoglycemic properties. Experiment on normal, type 1 and type 2 diabetic model rats at different prandial states have been combined in this experimental approach, which screens materials for hypo-/antihyperglycemic activity as well as provide an approximate idea on the possible target tissue(s) involved. Mangifera indica has been reported to have hypoglycemic effect in both laboratory animals (Ojewole et al., 2005; Muruganandan et al., 2005; Perpetuo et al., 2003; Aderibigbe et al., 2001; Sharma et al., 1997) and human diabetic subjects (Mahabir et al., 1997). The purpose of this work was to evaluate the hypo and antihyperglycemic effects of M. indica in normal and both type of diabetic model rats and to find out their possible mode(s) of antidiabetic action.

Plant materials and preparation of test samples: M. indica Linn. leaves and stem-barks were collected from the garden of the Pritilata Hall, Jahangirnagar University, Savar, Dhaka in the month of February 2007. Newly grown, fresh, green leaves (931 g) and skin of the stem-barks (893 g) of M. indica were pasted by homogenizing with mortar and were suspended with water for preparing the water extract and finally 800 mL of stem-barks and leaves water extract were collected. A portion of stem-barks and leaves paste were dissolved in absolute ethanol (96% ethanol) and filtered. Suspensions were dried using a rotary vacuum evaporator (BUCHI Rota vapor R-114). These semisolid extracts were again dried with water bath at 80ºC. The amount of total ethanol extract of stem-barks and leaves were found to be 30.1 g and 35.3 g. These dried extracts were kept in the Frazer and utilized for biological screening at BIRDEM.

Animals: The experiments were carried out on Long-Evans rats (180-220 g) of both sexes, bred at BIRDEM animal house and maintained at a constant room temperature of 22 ± 5ºC with humidity of 50-70% and the natural 12 hours day-night cycle. Animals were fed on a standard laboratory pellet diet and water ad labium.

Biological Testing: Experiments were carried out on normal, type 1 and type 2 rats according to the following scheme. The water extracts (leaf and stem-bark) were used at a dose of 1 mL/9 mL water/kg body weight and 96% ethanol extracts (leaf and stem-bark) were used at a dose of 1.3 g/kg body weight/10 mL. Extracts of M. indica were fed to the rats by smooth metallic tube under mild-ether anesthesia (Mamun et al., 2001). The control rats were given equal volume of distilled water; positive controls were given glibenclamide (5 mg /kg) and insulin (Actrapid HM-40 IU/mL) for type 2 and type 1 model rats respectively. Blood samples from rats were drawn by amputation of the tail tip. Blood samples were collected at 0, 60, 120 min for fasting conditions, at 0, 30, 75 min for simultaneous feeding of extract with glucose and at 0, 60 and 105 min when the extract was fed 30 min before glucose load (2.5 g/kg body weight).

Effects of M. indica on intestinal glucose absorption: An intestinal perfusion technique (Swintosky and Pogonowska-Wala, 1982) was used to study the effects of M. indica extracts on intestinal absorption of glucose in nondiabetic and type 2 diabetic rats fasted for 36 hours and anesthetized with sodium pentobarbital (50 mg/kg). The plant extracts were added to a kreb’s solution (g/L 1.02 CaCl2, 7.37 NaCl, 0.20 KCl, 0.065 NaH2PO4.6H2O, 0.6 NaHCO3, pH 7.4), supplemented with glucose (54.0 g/L) and perfused at a perfusion rate of 0.5 mL/min for 30 min through the duodenum. The perfusate was collected from a catheter set at 40 cm. M. indica extracts were added to Kreb’s solution to a final conc. of 25 mg/mL so that the amount of extract in the perfused intestine is equivalent to the dose of 1.3 g/kg. The control group was perfused only with Kreb’s buffer supplemented with glucose. The results were expressed as percentage of absorbed glucose, calculated from the amount of glucose in solution before and after the perfusion.

Statistical analysis: Data from the experiments were presented as mean ± Standard deviation. Statistical analysis was done by using the Statistical Package for Social Science (SPSS) software for windows version 12 (SPSS Inc., USA). Analysis of variance (ANOVA, Bonferroni Post Test) was done to see any difference between the groups. The level of significance was set at p≤0.05.

Streptozotocin injection to adult rats (for simulation of type 1 diabetes) resulted in severe diabetes, which was characterized by hyperglycemia (fasting blood glucose ranging 19.8-23.2 mmol/L) on the 7th day. In type 2 diabetic model rats fasting glucose level was slightly higher (6.9-8.7 mmol/L) indicating the presence of functioning β-cells. The water extracts and ethanol extracts of M. indica leaves and stem-barks showed no effect in nondiabetic, type 1 and 2 diabetic model rats in the fasting state (Table I). It is seen from the Table I that glibenclamide and insulin reduced serum glucose level in the fasting condition of normal and type 1 rats respectively. Glibenclamide and insulin showed significant hypoglycemic effects both at 60 min (p<0.02 and p<0.001) and at 120 min (p<0.001) in normal and type1 diabetic model rats respectively.

Table III: Effect of M. indica on blood glucose levels of diabetic model rats when the extracts were fed 30 mins before to glucose load

Figures 1 and 2 show the effect of ethanol extracts of stem barks and leaves of M. indica on upper intestinal glucose absorption in normal and type 2 diabetic rats respectively. The percent of glucose absorbed across the intestine was higher during the whole period of perfusion in normal and type 2 rats. The supplementation of the perfusion medium either with ethanol extracts of barks or leaves of M. indica in normal rats did not affect the amount of absorbed glucose throughout the whole period of experiment in normal rats (Figure 1). However, in type 2 diabetic models, supplementation of the medium with ethanol extracts of stem-barks reduced glucose absorption during the whole perfusion period (13-15% reduction after 25-30 min) (Figure 2). Our results demonstrate that all the extracts of M. indica leaves and stem barks showed significant antihyperglycemic effect in type 2 diabetic model rats when the extracts were fed simultaneously with glucose. Single oral administration of a dose of 250 mg/kg body weight produces a potent and strong hypoglycemic effect in type 2 rats. The obtained results are supported by the finding of other investigators (Sharma et al., 1997; Aderibigbe et al., 2001).

Hypoglycemic activity that is found when given with a simultaneous glucose load in diabetic rats indicates that the extracts may interfere with the intestinal glucose absorption in the gut by various mechanisms (Nahar et al., 2000; Vinik and Wing, 1990; Lempcke, 1987). It may be postulated that the extracts of M. indica might stimulate glycogenesis in the liver, which is enhanced by feeding (Creutzfeld et al., 1979). This effect was confirmed by Perpetus et al. where they showed that blood glucose level of diabetic rats consuming mango flour for 90 days decreased 66% in comparison to control rats. It was also observed that hepatic glycogen level of those diabetic rats was 64% greater then control. The author claimed that this increase in glycogen level might have contributed to the reduction of blood glucose level in these animals.

Ethanol extract of stem bark of M. indica was also effective in type 2 diabetic model rats when fed 30 min might be due to a systemic action, i.e. as a result of the stimulation of pancreatic β-cells and improving the insulin secretory capacity or enhancement of insulin action by the extract. This effect could not be confirmed by our study since serum insulin level after a single feeding was not determined. It has been claimed that the chronic intraperitoneal administration of mangiferin (a xanthone glucoside, isolated from the leaves of M. indica) at a dose of 10 and 20 mg/kg once daily for 28 days exhibited antidiabetic activity by lowering fasting plasma glucose level significantly at different time intervals in STZ diabetic rats and improved glucose tolerance. The accumulating evidences suggest that both pancreatic and extra pancreatic mechanisms might be involved in its antidiabetic or antihyperglycemic action (Muruganandan et al., 2005).

One of the objectives of the present study was to investigate whether the hypoglycemic effect is related to the inhibition of glucose absorption in the gut. This was investigated in gut perfusion experiment where the ethanol extracts of stem barks showed gradual decrease in glucose absorption. Aderibigbe et al. claimed that hypoglycemic effect of the aqueous extract of leaves of M. indica was compatible with chlorpropamide (an oral hypoglycemic agents) and the action may be parts due to an intestinal reduction of the absorption of glucose. Therefore, the activity of the extracts of M. indica does not seem to be mediated by increasing insulin secretion or insulin sensitivity since it is not active in type 1 model rats.

The antidiabetic activity of M. indica is probably at least, partly due to inhibition of glucose absorption in the gut.

The study was approved by the Ethical Committee of the Institute. The Principle of laboratory animal care (National Institute of Health–NIH publication No. 85-23) guidelines and procedures were followed in this study. 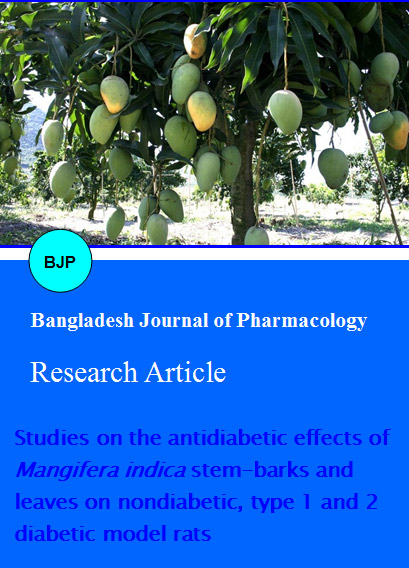