A total of four compounds namely, lupeol (1), betulinaldehyde (2), betulinic acid (3) and stigmasterol (4) were isolated from the stem extract of Dillenia indica Linn. The structures of the isolated compounds (1-4) were established by extensive spectroscopic studies. The crude methanolic extracts and its n-hexane, carbon tetrachloride, dichloromethane and chloroform soluble partitionates demonstrated weak antimicrobial activity against a wide range of Gram-positive and Gram-negative bacteria and fungi. The extractives revealed significant cytotoxic activity when tested by brine shrimp lethality bioassay. In addition, the extractives exhibited significant free radical scavenging activity when compared with ascorbic acid.

Dillenia indica Linn. (Syn. P. lanigerum; chalta in Bangla; Family-Dilleniaceae) is a evergreen large shrub or small to medium-sized tree that grows all over the Bangladesh. It is reputed as a cooling beverage in fever, expectorant in cough mixture, tonic, laxative and astringent (Maniruzzaman, 1993). Previous phytochemical studies with D. indica species revealed the occurrences of a number of triterpenes (Banerji et al., 1975), flavanoids (Pavanasasivam et al., 1975). We, herein, report the isolation of lupeol (1), betulinaldehyde (2), betulinic acid (3) and stigmasterol (4) as well as the antimicrobial activity, cytotoxicity and antioxidant activity of extracts from D. indica.

1H spectra were acquired using the Ultra Shield Bruker DPX 400 NMR instrument, and the chemical shifts are reported in ppm with respect to TMS or residual non deutarated solvent signal.

The stems of D. indica were collected from Rangpur district in the month of March 2007. The plant was identified by Dr. Mahbuba Khanum, Bangladesh National Herbarium, Dhaka, where a voucher specimen has been deposited (DACB Accession no. 32532). The stems were first sun dried and then ground into a coarse powder using a grinding machine.

The air-dried and powdered plant material (1 kg) was extracted with methanol. The extractive was filtered through fresh cotton bed and finally with Whatman No. 1 filter paper. The filtrates were concentrated with a rotary evaporator at low temperature (40-50°C) and reduced pressure to provide crude methanol extract (7 g). The crude extract (5 g) was partitioned with n-hexane, carbon tetrachloride, dichloromethane and chloroform, respectively. The subsequent evaporation of solvents afforded n-hexane (1.5 g), carbon tetrachloride (1.5 g), dichloromethane (0.6 g) and aqueous soluble (1.1 g)  materials.

The n-hexane soluble materials were fractionated by vacuum liquid chromatography. The column was eluted with petroleum ether, ethyl acetate and methanol mixtures of increasing polarities to provide 28 fractions (50 mL each). Compounds 1 (10 mg) and 2 (30 mg) were obtained as colorless crystals from the fraction eluted with 50 and 10% ethyl acetate in petroleum ether, respectively. The dichloromethane soluble materials of methanolic extract were fractionated by gel permeation chromatography over sephadex LH 20. The column was eluted with n-hexane : dichloromethane : methanol (2:5:1) mixtures to provide 24 fractions (5 mL each). Compound 3 (10 mg) was found as amorphous powder from fractions 14-16.

The disc diffusion method (Radovanović  et al., 2009) was used to test antimicrobial activity against thirteen bacteria and three fungi. Solutions of known concentration (mg/mL) of the test samples were made by dissolving measured amount of the samples in calculated volume of solvents (chloroform on methanol). Dried and sterilized filter paper discs (7 mm diameter) were then impregnated with known amounts of the test substances using micropipette. Discs containing the test material were placed on nutrient agar medium uniformly seeded with the test microorganisms. Standard antibiotic (Kanamycin) discs and blank discs (impregnated with solvents) were used as positive and negative control, respectively. These plates were then kept at low temperature (4°C) for 24 hours to allow maximum diffusion. The plates were then incubated at 37°C for 24 hours to allow maximum growth of the organisms. The antimicrobial activity of the test agent was determined by measuring the diameter of zone of inhibition expressed in millimeter. The experiment was carried out in triplicate and the mean of the readings were taken.

For cytotoxicity screening, DMSO solutions of the plant extractives were applied against Artemia salina in a 1-day in vivo assay, the experimental details of which could be found elsewhere (Eloff et al., 2008). For the experiment, 4 mg of each of the extracts was dissolved in DMSO. Solutions of varying concentrations such as 400, 200, 100, 50, 25, 12.5, 6.3, 3.1, 1.6, 0.8 µg/mL were obtained by serial dilution technique. The median lethal concentration LC50 of the test samples after 24 hours was obtained by a plot of percentage of the shrimps killed against the logarithm of the sample concentration.

The antioxidant activity (free radical scavenging activity) of the extracts on the stable radical 1, 1-diphenyl-2-picrylhydrazyl (DPPH) was determined by the method of Brand-Williams et al., 1995. In the experiment, 2.0 mg of each of the extracts was dissolved in methanol. Solution of varying concentrations such as 500, 250, 125, 62.5, 31.3, 15.6, 7.8, 3.9, 2.0 and 1.0 mg/mL were obtained by serial dilution technique. 2 mL of a methanol solution of the extract of each concentration was mixed with 4 mL of a DPPH-methanol solution (20 mg/L) and allowed to stand for 20 min for the reaction to occur. Then the absorbance was determined at 517 nm and from these values, the corresponding percentage of inhibitions were calculated by using the following equation:

Then % inhibitions were plotted against respective concentrations used and from the graph the IC50 was calculated. Ascorbic acid, a potential antioxidant, was used as positive control.

Repeated chromatographic separation and purification of the n-hexane and dichloromethane soluble partitionates of methanolic extracts of the stem of D. indica provided a total of four compounds (1-4), the structures of which were determined by extensive NMR spectral analysis.

In the 1H NMR spectrum of compound 2 again, the presence of a lupene skeleton having an angular aldehyde group was evident. The spectrum displayed signals attributable to an exomethylene protons at d 4.62 and 4.74 (1H, each, br.s) which together with an allylic methyl at d 1.69 demonstrated an isopropenyl moiety. The 1H NMR spectrum also showed singlets at d 0.74, 0.81, 0.91, 0.95 and 0.97 (3H, each) suggestive of the presence of five methyl groups in this compound. These were attributed to H3-25, H3-27, H3-26, H3-23 and H3-24 (Me-10, Me-14, Me-8, Me-14 and Me-4), respectively. The double doublet (J=11.0, 4.8 Hz) centered at d 3.17 could be assigned to the oxymethyline proton at C-3. The large coupling of this proton (H-3) with the vicinyl methylene protons suggested a β orientation of the hydroxyl group at C-3. In addition, the spectrum also showed a multiplet at d 2.85 for the methine proton at C-19. On the basis of the above spectral features, compound 2 was identified as betulinaldehyde, the identity of which was established by co-TLC with authentic sample as well as by comparison of these data with those reported for betulinaldehyde (Zong et al., 1984).

The 1H NMR spectrum of compound 3 revealed the presence of a lupene type carbon skeleton. It displayed signals attributable to an exomethylene group at d 4.60 and 4.73 (1H, each, br.s) which together with an allylic methyl at d 1.68 which indicated an isopropenyl function. The double doublet d 3.18 with couplings of 11.2 and 4.9 Hz centered at could be assigned to H-3. The large coupling of this proton (H-3) with the vicinyl methylene protons suggested a β orientation of the hydroxyl group at C-3. In addition, the spectrum also showed a multiplet at d 2.98 for the methine proton at C-19 and five methyl group resonances at 0.74, 0.81, 0.93, 0.96 and 0.97. On the basis of the above spectral features, compound 3 was identified as betulinic acid. The identity of 3 as betulinic acid was confirmed by comparison of these data with published values (Ikuta and Itokawa, 1988) as well as by co-TLC with an authentic sample.

The 1H NMR spectrum of compound 4 was almost identical to that recorded for stigmasterol (Panda et al., 2009). This allay with co-TLC with authentic sample confirmed its identity as stigmasterol.

The extractives were also subjected to brine shrimp lethality bioassay (Table I). In the study, the crude methanolic extract and dichloromethane soluble fractions were found to be highly toxic to brine shrimp nauplii, with LC50 of 8.92 μg/mL and 2.38 μg/mL, respectively. This indicated the presence of cytotoxic principles in these extractives.

Although the extractives showed strong cytotoxicity against brine shrimp nauplii, none of them demonstrated significant inhibition of growth of the test microorganisms. This was probably due to the development of partial or complete resistance of the microorganisms against the test samples, which might be the result of the indiscriminate use of antibacterial agents.

In case of antioxidant screening (Table II), the crude methanolic extract showed very strong free radical scavenging activity with IC50 value of 4.6 μg/mL, whereas the aqueous and dichloromethane soluble fractions revealed the IC50 of 84.5 and 162.7 μg/mL, respectively, suggestive of moderate antioxidant activity. The presence of strong free radical scavenging principles in the crude extractive but not in its Kupchan fractions demonstrated that the antioxidant activity of the crude extract might be due to the synergistic activity of the active principles present in the Kupchan fractions.

We wish to thank the Centre for Biomedical Research, University of Dhaka, Bangladesh for providing some laboratory facilities for carrying out the research. 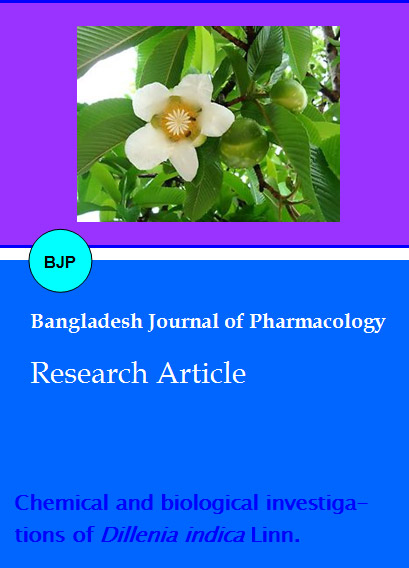