The ethanolic bark extract of Mitragyna diversifolia showed significant (p<0.05) antidiarrheal activity on gastrointestinal motility with barium sulfate milk model and castor oil-induced diarrheal model in rats. These results revealed that the bark extract possess pharmacological activity against diarrhea and may possibly explain the use of the plant in traditional medicine.

Diarrheal diseases are one of the leading causes of morbidity and mortality in developing countries and are responsible for the death of millions of people each year (Carlos and Saniel, 1990). Despite immense technological advancement in modern medicine, many people in the developing countries still rely on the healing practices and medicinal plants for their daily health care needs (Ojewole, 2004). Therefore, the World Health Organization encouraged studies for the treatment and prevention of diarrheal diseases depending on traditional medical practices (Atta and Mouneir, 2004).

M. diversifolia [Local name- Kalikodom, Tribal name- Thingkop (Bawm), Family- Rubiaceae)] is a small deciduous tree and frequently cultivated in the hilly area of Bangladesh. The bark of the plant is used traditionally by Bawm community of Bandarban district as remedy for diarrhea but has not been investigated for its antidiarrheal activity. The purpose of the present study was to find out the antidiarrheal activity of ethanolic bark extract of M. diversifolia in experimentally-induced acute diarrhea in rats.

Male/female Albino rats obtained from the animal house of BCSIR laboratories, Chittagong, weighing between 150-200 g were used for the present study. The animals were acclimatized to room temperature (28 ± 5°C) with a relative humidity of 55 ± 5% in a standard wire meshed plastic cages for 4 to 5 days prior to commencement of the experiment. During the entire period of study the animals were supplied with standard pellet diet and water ad libitum.

Plant materials have been collected from various localities of Bandarban area. The plants have been selected according to their using information, frequently used and mode of use for diseases. The botanical identity of each plant has been prepared and information collected in the course of interviews taken from local people and traditional medicine practitioners of Bawm community by field observation, plant observation were recorded.

The fresh bark of M. diversifolia was washed finely, chopped in to small pieces, air dried under shade and ground in to powder form and stored in an airtight container. 450 g bark powder was macerated in 3 L pure ethanol (90%) for 6 days at room temperature with occasional shaking. Every three days later, ethanol extract was filtered off through a cotton plug and finally with a Whatman No. 1 filter paper. The extract was concentrated under reduced pressure below 50°C through rotary vacuum evaporator. The concentrated extracts were collected in a Petri dish and air dried at room temperature. The whole process was repeated three times and finally deep brownish colored (bark) 25 g concentrated extracts was obtained which was kept in refrigerator at 4°C.

This experiment was carried out by the method described by Chatterjee (1993). Over night fasted fifteen Wistar Albino rats were randomly divided in to three equal groups (n=5). Control group received only distilled water 2 mL/rat orally. Positive control group received commercially available anti diarrheal drug loperamide 1 mg/kg orally. Treated group received M. diversifolia bark extract 250 mg/kg orally. Thirty min later 2 mL of 10% barium sulfate solution were administered in all groups of rats. After 30 min rats were sacrificed. And the distance traveled by BaSo4 milk was measured and expressed as a percentage of the total length of small intestine (from pylorus to the ileocecal junction).

Fifteen Wistar Albino rats were randomly divided in to three equal group (n=5)  control group, positive control group and treated group where control group received only distilled water 2 mL/rat, positive control group received loperamide 1 mg/kg as standard and treated group received M. diversifolia bark extract at the dose 2 g/kg body weight. Rats were housed in separate cages having paper placed below for collection of fecal matters. Diarrhea was induced in rats by oral administration of castor oil (1.0 mL/rat). Extract and drugs were given orally 1 hour before the administration of standard dose of 1.0 mL of castor oil. The number of both hard and soft pellet was counted at every hour over 6 hours period for each rat. Diarrhea was defined as the presence of stool with fluid material that stained the paper placed beneath the cages. Percent inhibition (PI) was calculated as follows:

All the values of antidiarrheal, tests were expressed as mean + SEM (Standard error of the mean). Statistical differences between the mean of the various groups were analyzed by using Students‘ t-test.  Probability (p) value of 0.05 or 0.01 was considered as significant. All the graphical presentation and statistical calculations were prepared using “Microsoft Excel- 2000”.

Table I: Effect of M. diversifolia bark on gastrointestinal motility with barium sulfate milk on rats

The aim of the present study was to assess the antidiarrheal effect of ethanolic bark extract of Mitragyna diversifolia in rats. The bark extract showed a significant (p<0.05) activity against castor oil-induced diarrhea. The result is almost comparable to the effect of widely used antidiarrheal drug loperamide when tested at 1 mg/kg. Castor oil is made up of 90% ricinoleate (Mekeon et al., 1999) which is metabolized to ricinoleic acid. Ricinoleic acid causes the irritation and inflammation in the intestinal mucosa, leading to release of prostaglandins, which stimulate the net secretion of water and electrolytes into the small intestine (Gaginella and Philips, 1975; Luderer et al., 1980). We speculate that that the antidiarrheal effects of ethanolic bark extracts may be due to the inhibition of prostaglandin biosynthesis. M. diversifolia bark extract also significantly (p<0.05) decreased the distance of gastrointestinal motility of rats.

In this study, all the animal experimentation was carried out according to the guidelines of Institutional Animal Ethics Committee (IAEC). 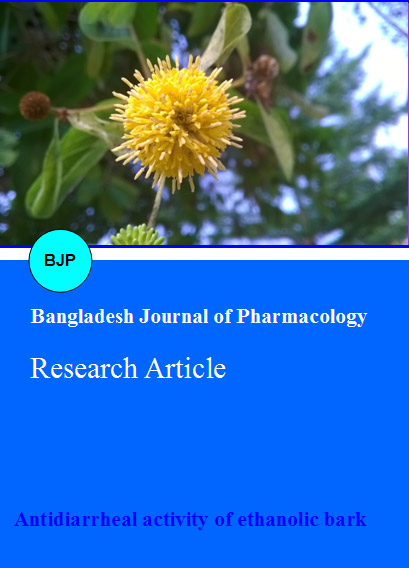