In this animal model (Wistar rats of either sex), common bile duct was ligated for 28 days. Rats were treated for 28 days with methanol extract of Cocculus hirsutus. On day 29, blood and liver were collected for biochemical estimation and histopathological studies. Bile duct ligation produced liver fibrosis with generation of reactive oxygen species and induction of oxidative stress. Hence the different concentrations of methanolic extract of C. hirsutus were evaluated for in vivo glutathione reductase activity. On bile duct ligation the liver fibrosis was induced with significant rise in serum marker enzymes levels. The hydroxyproline accumulation caused by hydrophilic bile acids accompanied by elevated hepatic lipid peroxidation, and glutathione levels. Treatment with C. hirsutus extract decreased the elevated levels of serum marker enzymes showing hepatoprotection, which was further confirmed by histopathological results.

Bile duct ligation is a typical model of biliary disease in animals, which features proliferation of bile duct epithelial cells, hepatocellular necrosis, apoptosis, stellate cell activation and eventually the formation of liver fibrosis and cirrhosis. Bile duct ligation has been associated with hepatic mitochondrial proteins and lipids and cytotoxicity of bile components such as lipophilic bile acids. The bile salts are partly responsible for the plasma membrane damage seen in bile-duct ligated models which leads to further oxidative stress (Wang et al., 2007).

Liver fibrosis is major features of a side range of chronic liver injury including metabolic, viral, cholestatic and genetic disease. The failure of bile salt excretion in cholestasis leads to retention of hydrophobic bile salts within the hepatocytes and causes apoptosis and necrosis (Lee et al., 2007). Bile duct ligation produces the lipid peroxidation in cellular membranes that induces cell injury and decreased in glutathione indicating importance of free radical which damages the defense system in body.

The literature survey revealed that there are no scientific studies carried out on hepatoprotective activity of the C. hirsutus. Hence, the present study is focused to evaluate the hepatoprotective and antioxidant potentials of the plant against bile duct ligation-induced liver fibrosis albino Wistar rats.

Extraction methodology: The plant was air dried, cut into small pieces and pulverized into powder. Five hundred gram of dried, powdered plant material was extracted with petroleum ether (60-80ºC) using soxhlet apparatus to remove lipids. It was then filtered and filtrate was discarded. The residue was then extracted successively with methanol using soxhlet apparatus and methanol was evaporated in a rotary evaporator at 40-50ºC under reduced pressure. The residual extract was suspended in water for overnight and filtered. The filtrate was dried and stored. The yield of extract was 20% with reference to dry starting material (Palsamy and Malathi, 2007).

The phytochemical investigation was performed according to Kokate and Purohit, 2004.

Experimental animals: Three months old Wistar Albino rats of either sex weighing 150-250 g were used for the study. The animals were procured from animal house of R.C. Patel IPER Shirpur. The animals were placed at random and allocated to treatment groups in polypropylene cages with paddy husk as bedding. Animals were housed at a temperature of 24 ± 2°C and relative humidity of 30-70%. A light and dark cycle was followed. All animals were fed on standard balanced diet and provided with water ad libitum.

Toxicity study (OECD 425): Acute oral toxicity was conducted for methanol extract on albino mice according to OECD 425 and median effective dose (ED50) of extract was selected based on LD50 obtained from acute toxicity studies.

Bile duct ligation induced liver damage (Vogel and Vogel, 2002): Rats were anesthetized with ketamin and diazepam. Laparatomy was performed under antiseptic conditions. A midline incision in the abdomen was made from the xiphosternum to the pubis, exposing the muscle layers and the linea alba, which was then incised over a length corresponding to the skin incision. The edge of the liver was then raised and the duodenum pulled down to expose the common bile duct, which pursues an almost straight course of about 3 cm from the hilum of the liver to its opening into the duodenum. There was no gall bladder, and the duct was embedded for the greater part of its length in the pancreas, which opens into it by numerous small ducts. A blunt aneurysm needle was passed under the part of the duct selected, stripping the pancreas away with care, and the duct was divided between double ligatures of cotton thread. The peritoneum and the muscle layers as well as the skin wound were closed with cotton stitches.

Biochemical estimations: On day 29, blood was withdrawn from all groups of rats by puncturing retro-orbital plexus. The blood samples were allowed to coagulate at room temperature. Serum was separated by centrifugation at 3,000 rpm at room temperature for 20 min and subjected to biochemical estimations serum transaminases, alkaline phosphatase, lactate dehydrogenase and bilirubin. Determination of serum total and direct bilirubin was done by using microplate reader (Power wave; Biotek Pvt. Ltd. Mumbai).

Hydroxyproline content in the liver: (Wardi et al., 2001): Small samples of liver tissue were hydrolyzed by 6N  HCl for 3 hours at 130ºC. Few drops of the methyl red indicator were added followed by 2.5 N NAOH required for neutralization. Final adjustments were made with diluted HCl and NAOH until the indicator turned slightly yellow, corresponding to pH 6.0 ± 7.0. The concentrations of NaCl in the final dilutions did not exceed 0.4 M as required. Samples of 2 mL were then oxidized by adding 1 mL chloramine T (Sodium p-toluene sulfonchloramide). After 20 min of mixing and shaking the test tubes 1 mL perchloric acid was added to each tube. After 5 min 1 mL p-dimethylaminobenzaldehyde solution was added and the mixture was shaken for 5 min. The tubes were placed in a 60ºC water bath for 20 min and then cooled in tap water for 5 min. The absorbance was measured at 557 nm.

Statistical analysis: The data were analyzed statistically by one way ANOVA followed by Dunnett’s test. p<0.05 was considered as significant.

Estimation of antioxidant activity: Glutathione in vivo estimation was done to the same group of rats according to Beutler et al., 1963.  The glutathione content of liver sample, in μmol/mg of protein.

The LD50 of plant methanolic extract was found to be 2,000 mg/kg. The effective dose 200 mg/kg was selected based on LD50 of plant.

Hepatomegaly occurs due to accumulation of lipids and proteins in hepatocytes, with an impaired protein secretion by hepatocytes. Water is retained in the cytoplasm of hepatocytes leading to enlargement of liver cells, resulting in increased total liver mass and volume (Rao et al., 2007) which is expressed in Table I. Liver fibrosis is major feature of wide range of chronic liver injuries including metabolic, viral, cholestatic and genetic. The proliferation of the bile ducts (ductular reaction) of the liver in response to various liver injuries is characterized by an increase in the number of intrahepatic bile ducts (Yoshioka et al., 2005). In the present study hepatic damage with fibrosis was produced by common bile duct ligation for 28 days. Bile duct ligation is associated with hepatic dysfunction includes the oxidative damage to mitochondrial proteins and lipids and cytotoxicity of bile acids. Release of reactive oxygen species (free radicals) leads to cell damage.

The body has an effective defense mechanism to prevent and neutralize the free radical induced damage. This is accomplished by a set of endogenous antioxidant enzymes such as superoxide dismutase, catalase and GSH etc. These enzymes constitute a mutually supportive team of defense against reactive oxygen species. Bile duct ligation induces imbalance between reactive oxygen species production and these antioxidant defense which results into oxidative stress through a series of events deregulates the cellular functions leading to hepatic damage (Sanmugapriya and Venkataraman, 2006).

All the experimental procedures and protocols used in the study were reviewed and approved by the (IAEC) Institutional Animal Ethical Committee of R.C. Patel IPER, Shirpur and were in accordance with the guidelines of the Committee for the Purpose of Control and Supervision of Experiments on Animals (CPCSEA). Registration No.RCPCOP/IAEC/2007-2008/30.

Authors are thankful to Principal S. J. Surana, R. C. Patel IPER for providing the necessary facilities for carrying out this research work. 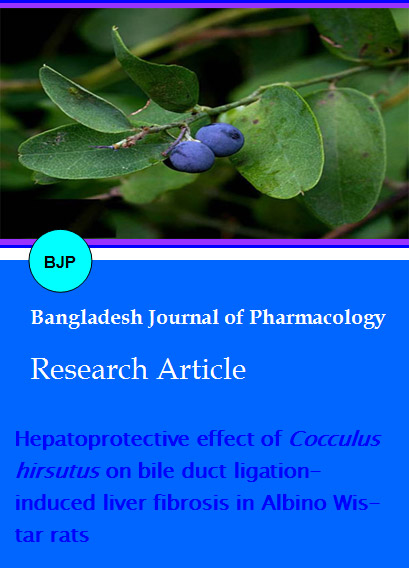