The sampling techniques headspace solid-phase microextraction (HS-SPME), petrol ether extraction (PEE) and steam distillation extraction (SDE) were compared for the GC-MS of volatile constituents present in ginger (Zingiber officinale). The effects of different parameters, such as extraction fibers, extraction time, extraction temperature and particle size ranges, on the HS-SPME of rhizome of ginger were investigated. Zingiberene (53.1%) were predominant components of ginger samples obtained by HS-SPME whereas those levels were 39.0% in the same samples by PEE and 35.1% in those by SDE, respectively. HS-SPME with polydimethylsiloxane (PDMS) fiber was more selective and particularly efficient for the isolation of volatile phytochemical composition and afforded a higher yield of total compounds than PEE and SDE. The specific compound isolated by SPME, which due to effective fiber, was much larger than that isolated by PEE or SDE. HS-SPME is a powerful tool for determining the volatile constitutes present in the traditional Chinese medicines.

The complex and time-consuming process for the preparation of samples sometimes further complicates the analytical results due to more influencing factors involved. Solid-phase microextraction (SPME) developed by Pawliszyn and coworkers in 1989, is a solventless extraction technique widely used in application of extraction from plants, food, biological and environmental samples (Zini et al., 2002; Arthur and Pawliszyn, 1990; Belardi and Pawliszyn, 1989; Cai et al., 2001; Jayatilaka et al., 1995). Headspace solid-phase microextraction (HS-SPME) also is a unique sample preparation technique, which eliminates most drawbacks to extracting organics, including high cost and excessive preparation time; in particular, HS-SPME is a simple and fast modern tool used to characterize the volatile fraction of aromatic and medicinal plants (Smith, 2003; Marriott et al., 2001). HS-SPME has diminished decomposition of plant compounds and cells, minimized activity of enzyme, and decreasing loss of those constituents. HS-SPME techniques offer a useful alternative to conventional techniques.

Zingiber officinale Rosc. (Zingiberaceae), a member of the tropical and subtropical Zingiberaceae, has been cultivated for thousands of years as a spice and for medicinal purposes. It is used extensively in traditional Chinese medicine to treat headaches, nausea and colds and in Ayurvedic and Western herbal medicinal practice for the treatment of arthritis, rheumatic disorders and muscular discomfort (College, 1985). Volatile phytochemical composition of rhizome of ginger were reported (Salgueiro et al., 2003; Maheshwari et al., 1986; Prakash et al., 1993; Meepagala et al., 2002; Bhuiyan et al., 2008), and their main composition is Zingiberene and its derivatives, and compounds of pharmacological activity of ginger are gingerols and its derivatives. If the compositions can reciprocally transform under specific conditions, it is necessary to elucidate biochemical pathways to important compounds, such as the ginger oils, in these plants by GC/MS and HPLC/MS, but sample preparation technique can reflect investigation result of the biochemical pathways of ginger. So, choice of sampling technique also is very important.

In the work discussed in this paper, to enable further understanding of the effects of different parameters, such as extraction fibers, extraction time, extraction temperature and particle size ranges, on HS-SPME of ginger. We compared three different extraction techniques including HS-SPME, petrol ether extraction (PEE) and steam distillation extraction (SDE) for GC–MS of volatile constituents from ginger.

Samples of rhizome of ginger were obtained comercially from Shuicheng of Guizhou Province, China. Samples were air dried, ground in a high-speed rotary cutting mill, and then screened to give fractions 40, 80, 120, and 160 μm in size, respectively.

SDE: The essential oil was prepared as follows: 100 g sample of 120 μm particle size was weighted into a 1,000 mL distillation flask, 500 mL deionised water was added and the mixture was distilled for 4 hours. Oil was collected from the condenser and oil was diluted with 5 mL of n-hexane. Then the extracts were dried with anhydrous sodium sulfate. The essential oil was stored at -20°C until analysis.

The sample (100 g of dried materials) was submitted to extract with petrol ether for 72 hours, using Soxhlet extraction method. The volatile distillate was collected over anhydrous sodium sulfate and refrigerated until time of analysis.

Before carrying out the optimization of the HS-SPME conditions for the analysis of volatile compounds of ginger rhizome, fiber screening was carried out. The silica fibers and the manual HS-SPME holder were purchased from supelco (Bellefonte, PA, USA). Four fibers were tested and compared: polydimethylsiloxane (PDMS, 100 μm), polydimethylsiloxane (PDMS, 7 μm), polyacrylate (PA, 85 μm), and carboxen-polydimethylsiloxane (CAR/PDMS, 75 μm). The coating of all fibers was 1 cm long. Before GC-MS analysis, each fiber was conditioned in the injector of the GC system, according to the instructions provided by the manufacturer.

The volatile substances in ginger rhizome were identified by comparing the retention times of the chromatographic peaks with those of authentic compounds run under the same conditions and by comparing the retention indices (as Kovats indices) with the literature data (Smith and Robinson, 1981; Kami et al., 1972; MacLeod and Pieris, 1984; Sakamura, 1987; Chyaui et al., 1992; Georgieva et al., 2005; Chen et al., 1986; Bartley et al., 2000; Yang et al., 2009). Peak enrichment on co-injection with authentic reference compounds was also carried out. The comparison of the MS fragmentation pattern with those of pure compounds and mass spectrum database search was performed using the National Institute of Standards and Technology (NIST147) MS spectral database, and Kovats index retention (Chyaui et al., 1992). The relative amounts of individual components are expressed as percent peak areas relative to total peak area.

The ion currents generated depend on the characteristics of the compound and for this reason the quantification was not completely true one. The results obtained by GC/MS might be used for characteristics of the biodiversity in the investigated organisms, as well as for quantitative comparisons between different groups of metabolites in them. This method is suitable for comparing the chemical composition of different organisms, because the deviations caused by the differences in the intensity of the mass spectral fragmentation will be identical (Georgieva et al., 2005).

The precision of HS-SPME was studied with six replicate analyses of the essential oils in Z. officinale under the optimum conditions. The precision was expressed as the relative standard deviation (RSD) of the peak areas.

Since various parameters potentially affect the extraction process, the optimization of the experimental conditions represents a critical step in the development of HS-SPME. In fact, extraction fibers, extraction time, extraction temperature and particle size ranges are generally considered as the most important factors. The optimization of the method can be carried out step-by-step or by using an experimental design. Table I shows different conditions of experiments carried out with HS-SPME for extractions of ginger. All the selected factors were examined using a four-level orthogonal array design with an L416 (44) matrix. In general, a full evaluation of the effect of four factors from three levels on the yield needs 256 (44) experiments. In order to reduce the number of experiments, a L4 (44) orthogonal design graph was used (Table I).

In this study, interactions among variables were not incorporated in the matrix and focus was placed on the main effects of the four most important factors. The results of the HS-SPME experiments, based on responses of peak areas, are given in Table I. The influence of the extraction fiber on the composition of the extracts was studied. For all the analytes, the extraction fiber was found to be significant as the main effect. The mean values of the responses of peak areas for the corresponding factors at each level were calculated according to the assignment of the experiment Figure 1. Figure 3: Comparison of the mainly volatile components extracted by SH-SPME, PFE and SDE

Choosing a fiber with suitable polarity, depending on the nature of the target compounds, is a very important factor in headspace analysis. In this work, the most effective fiber for HS-SPME was PDMS. The effects of different parameters on the HS-SPME sampling from rhizome of ginger were also studied. The results showed that sampling temperature is the dominant factor for the HS-SPME of the volatile compounds of rhizome of ginger; this could be due to an increase in less volatile compounds in the headspace which might compensate for the decrease in adsorption induced by high temperatures. The complex and time-consuming process for the preparation of PEE and SDE sometimes further complicates the analytical results due to more influencing factors involved.

The HS-SPME-GC-MS method, developed and applied in this work, proved to be a simple, speed and convenient tool for the purpose of fingerprinting characteristic of the volatile composition of traditional Chinese medicines. Large amounts of sesquiterpenes and lesser amounts of monoterpenes are responsible for the characteristic aroma of ginger. The qualitative profile of the volatile compounds of rhizome of ginger was similar, but their relative abundance showed several differences. This work is a first step which opens the perspective of further studies on the aroma composition of rhizome of ginger.

HS-SPME followed by GC–MS is suited to the extraction and semi-quantitative analysis of volatiles from rhizome of ginger.

The language edited was revised by International Science Editing.

Belardi RP, Pawliszyn J. The application of chemically modified fused silica fibers in the extraction of organics from water matrix samples and their rapid transfer to capillary columns. Water Pollut Res J Can. 1989; 24: 179-91.

Smith RM. Before the injection-modern methods of sample preparation for separation techniques. J Chromatogr A. 2003; 1000: 3-27. 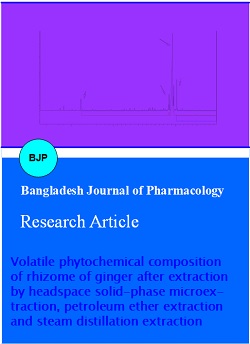