New drugs for the inhibition of the enzyme aldose reductase are in development and they have to be screened before being considered for preclinical and clinical evaluation. The current study deals with the evaluation of the cyclooxygenase inhibitory activity of flavonoids using in silico docking studies. In this perspective, flavonoids like bergapten, buceracidin-B, dorsilurin-F, communin-A, and coumestrol were selected. Epalrestat, a known aldose reductase inhibitor was used as the standard. Docking results showed that all the selected flavonoids showed binding energy ranging between -7.9 to -5.1 kcal/mol when compared with that of the standard (-5.6 kcal/mol). Intermolecular energy (-9.1 to -8.7 kcal/mol) and inhibition constant (1.6 to 187.4 µM) of the ligands also coincide with the binding energy. Communin-A contributed better aldose reductase inhibitory activity because of its structural parameters.

The drug discovery is a complex process whereby drugs are designed or discovered. The drug discovery in the past was a more tedious process that involved the identification of active constituents from traditional medicines or by serendipitous discovery.

The number of compounds entering the drug discovery process at the initial stage is usually very high. Among these only a very few candidate molecules makes it to the final step and emerges as the potential new therapy. The failure of a candidate molecule may occur due to different factors such as poor pharmacokinetics, lack of efficacy, adverse effects, commercial reasons etc. (Dias and Azevedo, 2008).

The AutoDock offers different types of search algorithms to search the conformational space. Among these, the Genetic Algorithm is the most modern and sophisticated. Genetic Algorithms are a family of powerful mathematical functions derived from the concepts of language of molecular genetics. The conditions in a biological evolution process are simulated and the conformational space is searched by “mutating” a ligand in order to find its lowest energy conformation in the “environment” of a fixed protein. Other types of search algorithms in AutoDock includes Simulated Annealing and Local Search (Morris et al., 2009; Hetenyi et al., 2002).

Aldose reductase (ALR2; EC: 1.1.1.21) belongs to aldoketo reductases super family. It is the first rate limiting enzyme in polyol pathway and reduces glucose to sorbitol by utilizing NADPH as a cofactor. Sorbitol dehydrogenase is the enzyme responsible for the conversion of Sorbitol into fructose (Ravindranath et al., 2009; Hwang et al., 2005). The polyol pathway represents a minor route of glucose utilization, accounting for less than 3% of glucose consumption. However, in the presence of high glucose, the activity of this pathway is increased and could represent up to 30% of total glucose consumption (Yadav et al., 2009). Evidence for the involvement of ALR2 in diabetic neuropathy, retinopathy, nephropathy and cataract emerged from several independent studies (Guzman and Guerrero, 2005). Abnormal activation of the polyol pathway during diabetes leads to accumulation of osmotically active sorbitol leading to osmotic as well as oxidative stress, resulting in tissue injury (Dong et al., 2005; Saraswat et al., 2008 ).

Flavonoids are natural substances with variable phenolic structures which are widely distributed in fruit, vegetables, grains, bark, roots, stems, flowers, tea, and wine. Over 4,000 structurally different flavonoids have been discovered from plant sources. These have raised considerable interest recently because of their beneficial effects on human health and are found to have antiviral, anti-allergic, antiplatelet, anti-inflammatory, antitumor and antioxidant activities. Research done on flavonoids led to the discovery of the French paradox, ie, low incidence of coronary heart disease, despite having a diet relatively rich in Mediterranean populations in association with red wine consumption and a high saturated fat intake (Patel, 2008).

The stereochemistry of binding of the ﬂavonoids on aldose reductase has not yet been characterized. In the present study, the structural models of the ligands in the aldose reductase binding sites has been carried out, which may facilitate further development of more potent anti diabetic agents.

The preparation of the target protein 3RX3 with the AutoDock Tools software involved adding all hydrogen atoms to the macromolecule, which is a step necessary for correct calculation of partial atomic charges. Gasteiger charges are calculated for each atom of the macromolecule in AutoDock 4.2 instead of Kollman charges which were used in the previous versions of this program. Three-dimensional affinity grids of size 277 × 277 × 277 Å with 0.6 Å spacing were centered on the geometric center of the target protein and were calculated for each of the following atom types: HD, C, A, N, OA, and SA, representing all possible atom types in a protein. Additionally, an electrostatic map and a desolvation map were also calculated (Konc et al., 2011). Rapid energy evaluation was achieved by precalculating atomic affinity potentials for each atom in the ligand molecule. In the AutoGrid procedure, the target enzyme was embedded on a three dimensional grid point (Umamaheswari et al., 2011). The energy of interaction of each atom in the ligand was encountered.

We have selected important docking parameters for the LGA as follows: Population size of 150 individuals, 2.5 million energy evaluations, maximum of 27000 generations, number of top individuals to automatically survive to next generation of 1, mutation rate of 0.02,
crossover rate of 0.8, 10 docking runs, and random initial positions and conformations. The probability of performing local search on an individual in the population was set to 0.06.

AutoDock was run several times to get various docked conformations, and used to analyze the predicted docking energy. The binding sites for these molecules were selected based on the ligand-binding pocket of the templates. AutoDock Tools provide various methods to analyze the results of docking simulations such as, conformational similarity, visualizing the binding site and its energy and other parameters like intermolecular energy and inhibition constant. For each ligand, ten best poses were generated and scored using AutoDock 4.2 scoring functions (Madeswaran et al., 2012).

In silico docking study, was carried out to identify the inhibiting potential of selected flavonoids against aldose reductase enzyme (Figure 2). Lead optimization of the selected compounds was done by computation of druglikeness properties. The druglikeness scores of the compounds were evaluated with the help of Lipinski’s rule. The docking studies were performed by the use of AutoDock 4.2. In the docking studies, if a compound shows lesser binding energy compared to the standard it proves that the compound has higher activity. The docking poses were ranked according to their docking scores and both the ranked list of docked ligands and their corresponding binding poses (Sivakumar et al., 2011). In Figure 3, docked pose of aldose reductase enzyme with the ligands communin-A and Epalrestat clearly demonstrated the binding positions of the ligand with the enzyme. Binding energy of the individual compounds were calculated using the following formula,

Analysis of the receptor/ligand complex models generated after successful docking of the flavonoids was based on the parameters such as hydrogen bond interactions, ï – ï interactions, binding energy, RMSD of active site residues and orientation of the docked compound within the active site (Azam et al., 2011). As a general rule, in most of the potent anti inflammatory compounds, both hydrogen bond and ï – ï hydrophobic
interactions between the compound and the active sites of the receptor have been found to be responsible for mediating the biological activity.

Flavonoids showed binding energy ranging between 7.91 kcal/mol to -5.08 kcal/mol (Table I). From the selected flavonoids communin-A had showed better binding energy (-3.93 kcal/mol) when compared to the standard epalrestat (-5.59 kcal/mol). This proves that communin-A consist of potential aldose reductase inhibitory binding sites when compared to the standard.

Table I: Binding energies of the compounds based on their rank

Table II: Inhibition constant of the compounds based on their rank

Table III: Intermolecular energies of the compounds based on their rank

Based on the docking studies, the aldose reductase inhibitory activity of the selected compounds was found to be decreased in the order of communin-A, buceracidin-B, coumestrol, Bergapten, epalrestat, and dorsilurin-F. All the flavonoids possess binding sites with aldose reductase enzyme. But, only the communin-A showed better binding interactions and docking parameters (binding energy, inhibition constant, intermolecular energy) than the other selected flavonoids and the standard.

On the basis of the above study, communin-A, possess potential aldose reductase inhibitory binding sites and docking parameters compared to that of the standard. This may be attributed due to the differences in the position of the functional groups in that compound. Further development of communin-A and their derivatives could be a potential drug candidate for the aldose reductase inhibition in future.

Guzman A, Guerrero OR. Inhibition of aldose reductase by herbs extracts and natural substances and their role in prevention of cataracts. Revista Cubana de Plantas Medici-nales, 2005; 10: 3-4. 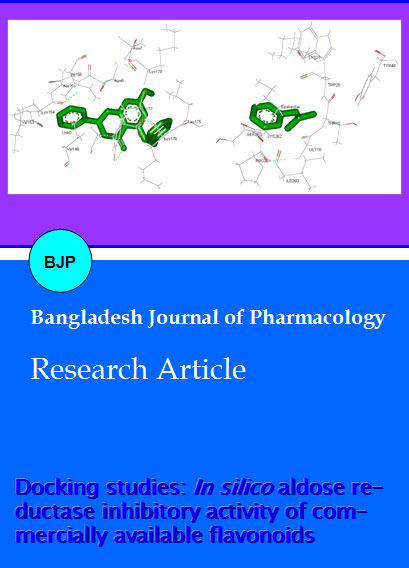