To investigate the inhibitory effect of imatinib on the migration of normal human epidermal melanocytes (NHEM), the growth and differentiation of NHEM were measured by MTT assay. Transwell Cell Migration Assay was performed to determine the migration of NHEM following imatinib treatment. The phosphorylation of c-kit in NHEM after imatinib treatment was measured by Western blot assay. Imatinib at 0.1, 1.0 and 5.0 μM could inhibit the SCF (50 ng/mL) induced NHEM migration and suppress the phosphorylation of c-kit in NHEM. The result concluded that imatinib can inhibit SCF induced NHEM migration and suppress the c-kit phosphorylation in NHEM. This provide theoretical basis for the prevention of post-treatment recurrence of nevus spilus.

Imatinib mesylate is an inhibitor of tyrosine kinase and recently applied  in the treatment of chronic myelogenous leukemia which may be attributed to the blocking of activities of Bcr-abl, V-abl, C-abl, PDGF receptor and c-kit tyrosine kinase (Deininger et al., 1997). Melanocytes have expression of c-kit and c-kit plays important roles in the survival, migration and pigment synthesis of melanocytes (Halaban, 2000). Imatinib could inhibit the proliferation of normal dermal and scleroderma fibroblasts at least partly via the inhibition of the phosphorylation of platelet-derived growth factor receptor, which suggests that imatinib can serve as therapy to limit dermal fibroblast proliferation in scleroderma (Soria et al., 2008). Thus, we speculated that imatinib could inhibit the migration of melanocytes and might be used as a drug for the prevention of post-treatment recurrence of nevus  spilus. In the presence study, normal human epidermal melanocytes (NHEM) were collected and cultured and the suppressive effects of imatinib on the growth and migration of NHEM were investigated aiming to explore the potential mechanisms underlying the inhibited growth and migration following imatinib treatment.

Culture of NHEM and MTT assay of NHEM proliferation

Detection of effect of imatinib on NHEM migration

NHEM was maintained in HuMedia-kB2 without HMGS and 10% FBS for 24 hours and then the medium was refreshed with HuMedia-kB2 containing 10% FBS followed by addition of imatinib at different concentrations. Following incubation for 90 min, SCF at different concentrations was added to the supernatant followed by incubation for 15 min. Then, 1 × 106 cells were harvested and underwent lysis in 100 μL of lysis buffer (0.15 mmol NaCl, 5 mmol EDTA, 1% Triton X-100, 10 mmol Tris-Cl, 5 mmol DTT, 0.02 mmol PMSF) for 30 min. Centrifugation was performed at 10,000 rpm for 10 min and the supernatant was collected for determination of protein concentration. The protein concentration was adjusted to 0.03 mg/mL and the protein solution (supernatant) was heated at 70°C for 5 min and then allowed to keep on ice for 5 min. Then, 20 μL of protein solution was mixed with loading buffer of appropriate volume and the mixture was subjected to 10% SDS-PAGE (120V, 60 min). The proteins were then transferred onto PVDF membrane which was then blocked in BSA overnight. The ECL protein detection reagents and ECL protein analysis system were employed for detection. The primary antibody was anti-mouse p-Tyr (PY99) (p-c-kit) monoclonal antibody and anti-mouse β-tubulin (D-10) monoclonal antibody. The PVDF membrane was incubated with primary antibody at 1:1,000 for 1 hours at room temperature and then with HRP conjugated goat anti-mouse secondary antibody (IgG) at 1:5000 for 30 at room temperature. After washing of PVDF membrane, the reagent 1 and 2 were mixed at a ratio of 1:1 and PVDF membrane was treated this mixture for 1 min. Visualization was performed in X-ray film for 3 min.

Microsoft Excel was employed for statistical analysis which was performed with F-test and then with two-tailed student "t" test. A value of p<0.05 was considered statistically significant.

In the Group A, the number of cells migrating from the upper chamber was extremely small (Table I). In the Group C, there was still small number of cells migrating from the upper chamber. After addition of SCF at 50 ng/mL to the lower chamber, the number of NHEM migrating from the upper chamber was markedly increased irregardless of the presence of FBS in the lower chamber (Table I, Figure 1, Figure 2) (p= 0.00004 Group B vs A; p= 0.00026 Group D vs C). This result suggests SCF can stimulate the migration of NHEM. After addition of 50 ng/mL SCF, imatinib could markedly inhibit the SCF induced migration of NHEM as compared to control group (without imatinib), which was in a imatinib concentration dependent manner: The higher the concentration of imatinib, the more obvious the suppression of NHEM migration (Table I).

Table I: Effect of 50 ng/mL SCF and imatinib at different concentrations on NHEM migration (number of cells migrating the upper chamber)

Cells were harvested and western blot assay was employed to detect the expressions of β-tubulin and p- Tyr (p-c-kit). Results showed, in the absence of SCF, the expression of p-c-kit was very low in NHEM (band 1). After addition of SCF, the phosphorylation of c-kit was marked increased in NHEM (Bands 2, 3, 4). In addition, imatinib could inhibit the SCF induced c-kit phosphorylation (Bands 9, 10, 11, 12), which was in a imatinib concentration dependent manner: The concentration of imatinib, the lower the expression of p- c-kit (Figure 2; Table II).

Nevus spilus is usually treated with laser treatment, pulse treatment, cryotherapy, etc. However, the post- treatment recurrence has been a challenge for dermatologists (Grevelink et al., 1997). The cause of post-treatment recurrence may be related to the migration of melanocytes and the pigment synthesis (Bergamaschi et al., 1993). Melanocytes originate from neural crest and the pigment synthesis in melanocytes is associated with tyrosinase. Thus, we speculated that inhibition of tyrosine kinase may be used to inhibit the growth, migration and pigment synthesis of melanocytes. Imatinib as imatinib mesylate has molecular formula C29H31N7O·CH4SO3 with the molecular weight of 589.7. 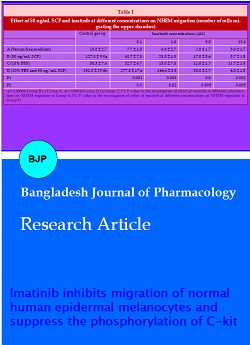