Comparison of terpene components from flowers of Artemisia annua

Artemisia annua L. is an annual herb native of China, where it has been used in the treatment of fever and malaria for many centuries. Many secondary metabolites of terpene peroxides were isolated from the plant, such as artemisia ketone, artemisinic alcohol, arteannuin B and myrcene hydroperoxide (Bertea et al., 2005; Brown et al., 2003). The most famous terpene peroxide is Artemisinin, which chemical structure is an amorphane-type sesquiterpene endoperoxide, and it has become an important plant-derived compound in the treatment of the chloroquine-resistant and cerebral malarias (Klayman, 1985). The essential oils, another important composition of A. annua, have been subjected to extensive chemical study. It was reported that the oils contained artemisia ketone, 1,8-cineole and camphor as key components. Significant variations in the percentage occurrence of different constituents have also been reported. The percentage of artemisia ketone, 1,8-cineole and camphor were reported to vary from 0.0-63.0, 1.5-31.5 and 5.0-20.0%, respectively, Other major components reported were α-, β-pinene, borneol, carvacrol, thymol, myrcene, limonene, camphene, copaene, β-caryophyllene, α-terpineol, α-, β- and γ- elemene, sabinine, α-guaiene, caryophyllene, caryophyllene oxide, germacrene-D and so on (Fabien et al., 2002; Neetu et al., 2002; Perazzo et al., 2003; Soylu et al., 2005; Rasooli et al., 2003; Flora et al., 2004; Ma et al., 2007; Divya et al., 2007; Hashemi et al., 2007).

Chongqing, China, shares eighty percent of A. annua around the world, where an A. annua GAP Cultivation Demonstration Site has been built for three years. But systemic study about the essential oils of the herb has not been previously mentioned in literature. The effect of flowering on terpenes content of A. annua flower essential oils at pre-, full- and post-flowering stage was investigated. In the present paper we report the analytical results of the essential oils at different flower developing stages.

Shade-dried plant materials (50.0 g) were hydrodistilled separately in Clevenger-type equipment for 4h. The oils were collected and dried over anhydrous sodium sulfate and stored in a refrigerator at 4°C for analysis.

GC analyses were performed using a Shimadzu GC- 2010 gas chromatograph equipped with an FID and an HP-5 fused silica column (30 m × 0.32 mm i.d., 0.25 μm film thickness) with a 5% phenyl-substituted methyl-polysiloxane phase. The oven temperature was programmed at 40°C for 4 min and then increased to 240°C at a rate of 4°C/min. Injector and detector temperatures were 250 and 265°C, respectively. The carrier gas, helium (99.999%), was adjusted to a linear velocity of 43 cm/s. The essential oil samples were diluted 5-fold, and 1 μL of a diluted solution was injected into the GC/MS in the split mode with a split ratio of 1/20.

MS analyses were performed using a Shimadzu MS- QP2010 with ionization energy of 70 eV, a scan time of 0.5 s and a mass range of 33–450 amu. The percentages of compounds were calculated by the area normalization method without considering response factors. The components of the oil were identified by comparison of their mass spectra with those of the spectrometer database using the NIST147 mass spectral database and also with those of authentic compounds. The identifications were confirmed by comparison of the fragmentation patterns and Retention index with those reported in the literature (Divya et al., 2007a; Flora et al., 2007; Divya et al., 2007b). The retention index was found with a standard mixture of C8 to C22 compounds under chromatography conditions, consistent with those of the chromatography conditions of the samples analyzed.

The flower essential oils were obtained from A. annua at pre-, full- and post-flowering stage with 2.2, 1.4 and 1.3% yield (relative to dried weight), respectively. Three oils were pale yellow, and the results of the analysis of the essential oils are given in Table I.

Table I: Chemical composition of the flower essential oils at pre-, full- and post-flowering stage of A. annua

In general, the oxygenated monoterpenes were declined slowly with flower developing, among major compounds, artemisia ketone, camphor, borneol and trans-3(10)-Caren-2-ol were raised tendency, while 1,8- cineole was declined (Figure 1c). Interestingly, the sesquiterpenes hydrocarbons increased sharply from 8.9% at pre-flowering stage to 5.0% (at the top of content) at full-flowering stage, followly by, which decreased slowly to 32.2% at post-flowering stage. Among of these compounds, the change of β- caryophyllene and β-farnesene was good examples. The content of former from 2.3% added to 19.4%, then decreased to 16.3%; and that of the later from 2.6% added to 9.4%, then decreased to 9.0% (Figure 1D). 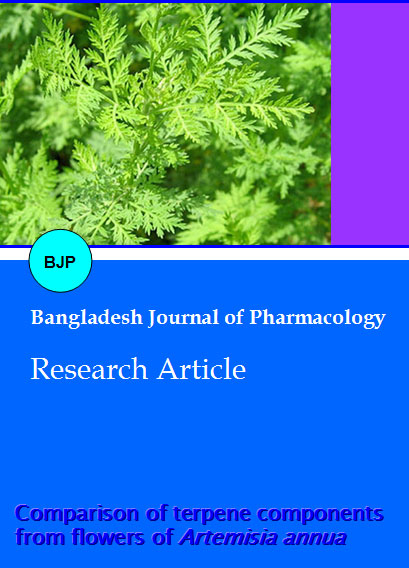