Pithecellobium jiringa is Malay traditional local delicacy. There is no local data on antimicrobial nature of P. jiringa is available. The objective of our study was to evaluate the antimicrobial activity of P. jiringa. Leaves, pods and seeds of P. jiringa were extracted using methanol. Ten test microorganisms were used in the study. The disc diffusion assay was used to determine the sensitivity of the samples, while the liquid dilution method was used for the determination of the minimal inhibition concentration (MIC). Chloramphenicol was used as a reference standard. The results revealed that all extracts of P. jiringa showed the antimicrobial and antifungal activities against the test organisms. Amongst the active extracts, the minimal inhibition concentration (MIC) determination showed that the extract of P. jiringa leaf was the most active against S. aureus, S. epidermidis and M. gypsum (100 mg/mL). The results provided evidence that the studied plants extract might be potential sources of new antimicrobial drug.

Plants of the genus Pithecellobium mostly grow in southeast Asia (Lee et al., 1992). Pithecellobium belongs to the subfamily Mimosoideae. Mimosoideae is from family of Leguminosae (Allen & Allen, 1981). The Leguminosae is one of the largest families of flowering plants with 18,000 species classified into around 650 genera in the world (Harborne, 1994). There are 70 genera and 270 species of Leguminosae can be found in Malaysia (Corner, 1988).

The leaves, pods and seeds of P. jiringa were collected from Air Itam Dam, Penang, Malaysia.

Preparation of the extract

One kilogram of coarsely powdered dry leaves, pods and seeds of P. jiringa were successively extracted using a Soxhlet apparatus with 95% methanol as solvent, at 55°C for 3 hours. The resultant extracts were then concentrated to dryness in a rotary evaporator under reduced pressure at a temperature of 40°C. The stock solution containing 1,000 mg/mL (w/v) were prepared in the 95% methanol and then further diluted in distilled water.

The agar disc diffusion method was used to determine the sensitivity of the samples. The bacterial strains were grown on nutrient agar while fungal strains were grown on sabouraud dextrose agar. The plates were prepared by pouring 30 mL of media into sterile 90 mm Petri dish. The sterile Whatman no. 1 filter papers (6 mm diameter) were placed on the spread-surface of the Petri dishes and 3 μL of dried extract was spotted on each of the filter papers. Blank discs impregnated with sterile distilled water were used as negative controls, and discs of chloramphenicol (30 mg) as positive control. The plates were incubated overnight at 37°C for bacterial strain and 30°C for 3 days for fungal stain. Each experiment was repeated at least three times and the mean of the diameter of the inhibition zones was calculated. Antimiorobial activities were indicated by clear zones of growth inhibition.

Minimum inhibitory concentrations (MIC) were determined by the liquid dilution method. The estimate of the MIC was carried by using P. jiringa leaf extract against the organisms. Dilution series were set up with 0.5, 1.5, 8.5, 15.0, 30.0, 55.0, 100.0, 130.0, 165.0, 250.0, 350.0 and 500.0 mg/mL of Sabouraud glucose broth medium. Chloramphenicol was used as a reference standard. The lowest concentration which did not show any growth of the tested microorganism after macroscopic evaluation was determined as the MIC. All data represent at least three replicated experiments per microorganism.

Effect of P. jiringa leaf extract on B. subtilis

Two milliliter of B.subtilis suspension was added into nutrient broth containing P. jiringa leaf crude extract to give a final dilution of 250 mg/mL. The mixture was then incubated at 30°C for 24 hours. Sterile distilled water was used as control. A few drops of the test mixture were also fixed for light and scanning electron microscopy studies.

Herbal medicine has been practiced especially in developing countries for many years. It is used for the traditional treatment of health problems (Cragg and Newman, 2002). Numerous studies have been conducted with the extracts of various plants, screening antimicrobial activity as well as for the discovery of new antimicrobial compounds (Cowan, 1999; Gordon and David, 2001; Parekh et al., 2006). Scientific experiments on the antimicrobial properties of plant components were first documented in the late 19th century (Zaika, 1975).

In recent years, antimicrobial resistance among pathogens is becoming a serious concern especially due to the indiscriminate use of antimicrobial drugs (El-Mahmood et al., 2008). Furthermore, antibiotics are sometimes associated with adverse effects to the host. Thus, there is a need to develop alternative antimicrobial drugs from medicinal plants for the treatment of infections (Cordell, 2000).

Table I: Antimicrobial activities of the leaf, pod and seed of P. jiringa extracts Figure 1: Comparison of zone of inhibition of chloramphenicol and P. jiringa leaf extract against S. aureus

Microscopic observation on the effect of the extract on P. jiringa was done by scanning electron microscopy studies (Figure 2). The most prominent change seen was the morphology of the bacteria. The untreated culture revealed abundant cylindrical shaped bacteria, whereas the treatment culture showed the shrunken and collapsed bacteria. This phenomenon could be due to the leakage of the cell wall or perhaps some alteration in the membrane permeability and resulting in the loss of the cytoplasm. This could lead to the loss in rigidity of the bacteria and finally cause the death of the cells.

Figure 2: Scanning electron microscopy study of  B. subtilis after exposure to 250 mg/mL of P.jiringa leaf extracts for 24 hours. (A) Untreated culture (control), showing many cylindrical shaped of bacteria (2000x). (B) Treated culture, showing the collapse and shrunken bacteria (5000x)

To the best of our knowledge, the antimicrobial activity of P. jiringa is being reported for the first time. The present study provides an important basis for the use of extracts from P. jiringa for the treatment of infections associated with the studied microorganisms. The results provided evidence that the studied plant extracts might be potential sources of new antimicrobial drug. However, it is important to point out that further work is needed to find out the active and pure compounds from the crude extracts which can then be tested for antibacterial and antifungal activities.

This study shows that methanol extracts of leaves, pods and seeds of P. jiringa have antibacterial and antifungal activities against the test pathogens. 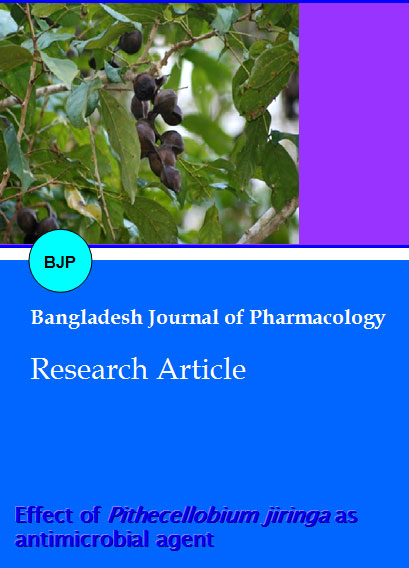