Safflower is the dry flower of Cathamus tinctorius L which has been used in traditional Chinese medicine  for promoting blood circulation for removing blood stasis. To date, it has been applied in the treatment of trauma, gynecological diseases, cardiovascular diseases and pulmonary fibrosis (Wang et al., 2011). More than 200 compounds have been isolated from safflower including flavonoids, phenylethanoid glycosides, coumarins, fatty acids, steriods and safflower polysaccharides. Among these compounds, safflower yellow (SY) is the effective part of the aqueous extract  of safflower (Fan et al., 2009). Hydroxy safflower yellow A (HSYA) is an important active ingredient of SY and safflower. The SY for injection has been used to treat myocardial ischemia in clinical at 80 mg/d (Wang et al., 2011).

Safflower yellow is a common traditional Chinese medicine for promoting blood circulation for removing blood stasis. It has been used in the treatment of blood circulation disorders such as coronary heart disease. In these diseases, hypercoagulable state characterized by platelet activation, coagulation and alteration in fibrinolytic activity can be found at any stage, which attribute to the coronary artery spasm, myocardial ischemia and myocardial infarction (Görög et al., 1995). In recent years, studies have confirmed that TAT, GM P-140 and tpA can serve as markers for thrombosis and prothrombotic state and have been used in clinical practice. In the development of these diseases, platelet activation is frequently found accompanied by increase in free calcium in the platelets. Platelet activating factor (PAF) is an inflammatory cytokine synthesized in multiple cells and has been found to be the most potent inducer of platelet aggregation (Penna et al., 2011). Study has confirmed than PAF involves in the occurrence and development of numerous human disease and plays important roles in the pathophysiology of some cardiovascular and cerebrovascular diseases (Shen and Li, 1991). Clinically, aqueous extract of safflower is the main drug used and safflower yellow is the major aqueous-soluble ingredient and belongs to chalcone ketone (Wang et al., 2011; Zhou, 1993). In the present study, the effect of safflower yellow on the PAF induced platelet aggregation, 5-HT release by platelets and the free calcium in platelets aiming to explore the mechanism of safflower yellow to promote blood circulation for removing blood stasis.

Five male patients with coronary heart disease who were aged 48 ± 7 years were recruited. The coronary heart disease was diagnosed according to the criteria developed by World Health Organization. Thrombosis and bleeding disorders were excluded from these patients. The study has been approved by the ethics committee of Xinhua Hospital and written inform consent has been obtained from each patient.

Blood was collected from the artery and mixed with ACD solution (85 mmol/L sodium citrate, 71 mmol/L citrate acid, 110 mmol/L glucose) at a ratio of 1:6 (v/v) for anticoagulation. Centrifugation was done at 30 ×g for 5 min and supernatant (plasma) rich in platelets was collected followed by centrifugation at 500 ×g for 5 min. The supernatant was removed and the platelets in the sediments were suspended in calcium free Tyrode's solution (pH6.5, 2.62 mmol/L KCl, 1.0 mmol·L MgCl2, 137 mmol/L NaCl, 12 mmol/L NaHCO3, 5.6 mmol/L glucose, 0.25% bovine serum albumin (BSA) which was the washed coronary heart disease platelet. TTBSA was used to adjust the platelet concentration at 2.5 × 1011/L. (LaLau et al., 1984)

Detection of 5-HT release by platelets

Detection of free calcium in platelets

The platelet sediments were collected and mixed in Hepes buffer (pH 7.4, 145 mmol/L NaCl, 5 mmol/L KCl, 1 mmol/L MgSO4, 5 mmol/L glucose, 10 mmol/L Hepes, 0. 5 mmol/L Na2HPO4, and 0.25% BSA). The platelet concentration was adjusted at 3. 5 × 1011/L. Then, Fura- 2/AM was added to platelet suspension at a final concentration of 2 μmol/L. This mixture was under continuous shaking at 37°C for 40 sec. The platelets were washed with Hepes buffer twice followed by centrifugation at 500 ×g for 5 min. Then, the platelets were resuspended in Hepes buffer which was the Fura-2 loading platelet suspension. Three groups were included: PAF group, ginkgolide group and Safflower yellow group. In brief, 0.56 mL of Fura-2 loading platelet suspension was mixed with 6 μL of 0.1 mol/L  CaCl2. Then, normal saline, ginkgolide and safflower yellow at different concentration were added to corresponding tubes (10 μL in each group) followed by incubation at 37°C for 3 min. Then, fluorescence was measured at excitation wavelength of 340 or 380 nm and emission wavelength of 510 nm. The curve was delineated over time and 24 μL of 2 × 10-8 mol/L PAF 20.25% BSA calcium free Tyrode's solution was added at 20~30 sec after detection. The curve was recorded over time. The F340 and F380 were measured at rest and after PAF treatment. Safflower yellow might interfere with the fluorescence leading to the reduction of fluorescence value and thus the fluorescence value in the safflower yellow group was adjusted as follows. ΔF340= F340normal saline – F340 safflower yellow, ΔF380= F380normal saline – F380 safflower yellow, F340 adjustment = Fp340 safflower yellow +ΔF340 and  F380 adjustment  = Fp380safflower yellow +ΔF380. Following Fura-2 loading, fluorescence was measured at excitation wavelength of 340 and 380 nm and emission wavelength of 510 nm, and the F340/380 was parallel to the free calcium in the platelets. In the present study, the F340/380 in the normal saline group served as the free calcium in the platelets at rest. After treatment with PAF, the Fp340/Fp380 was measured and after treatment with PAF + safflower, the adjusted F340/380 was calculated to reflect the effect of safflower yellow. In the present study, experiment was done twice and means were calculated (Fang et al., 1993).

In our study, results demonstrated that safflower yellow exerted suppressive effect on PAF induced platelet activation, and removal of safflower yellow could reverse this suppressive effect. These findings suggested that saflower yellow is a major aqueous soluble ingredient exerting anti-PAF effect. PAF is the most potent antiplatelet activation factor so far. PAF can be synthesized by platelets, white blood cells, endothelial cells and other cells and has wide biological activities. There is evidence showing that PAF is an important mediator in numerous diseases and closely related to ischemia-reperfusion injury, coronary heart disease, atherosclerosis, cerebrovascular diseases and other ischemia related cardiovascular and cerebrovascular diseases (Penna et al., 2011). In these diseases, the platelet aggregation is active and some thrombogenic factors including TXA2, β2TG, 5-HT, etc are released leading to the tendency to thrombosis. PAF can activate phospholipase C (PLC) and catalyze the hydrolysis of phosphatidyl inositol into diacylglycerol (DAG) and inositol triphosphate (IP3). IP3 can promote the release of calcium via the dense pipeline system and facilitate the influx of calcium resulting in increase in intracellular calcium (Logan et al., 2000; Moriguchi et al., 2010). The intracellular calcium involves in the regulation of platelet function. Calcium can act as an initiator to activate the platelet aggregation and release of mediators. The increase in intracellular calcium activates platelets promoting their aggregation and subsequent circulation disorder. Our results demonstrated that safflower yellow could inhibit the PAF induced influx of calcium which was attributed to the suppression of platelet activation and subsequent cardiovascular protection. This is also an important strategy to the improvement of ischemia related cardiovascular and cerebrovascular diseases. Our findings demonstrated that safflower yellow could inhibit PAF induced platelet activation and suppress platelet aggregation, release reaction and increase in intracellular free calcium. Ginkgolide, an inhibitor of PAF receptor, has similar activity to safflower yellow. Thus, we speculated that safflower yellow might act on the membrane of platelet and competitively inhibit the binding between PAF and its receptor which antagonizes the bioactivity of PAF. However, this hypothesis is required to be further confirmed in future studies. Safflower yellow is a common traditional Chinese medicine for promoting blood circulation for removing blood stasis. It has been found to promote menstrualtional flow and remove stasis to ease pain. Clinically, safflower has been used in the treatment of CHD, angina, cerebral thrombosis and vascular diseases. Generally, aqueous extract of safflower is used. Thus, the biological activity of safflower might be related to the ability of safflower yellow to antagonize PAF and improve the platelet function. Safflower has favorable adaptability, is widely distributed and easy to grow. The extraction of safflower yellow is simple. Thus, safflower yellow has promise in clinical application. Some studies have reported the application of safflower yellow in the treatment of ischemia disease. To elucidate the anti-PAF effect of safflower yellow and to develop anti-ischemic drugs have important economic and social benefit. 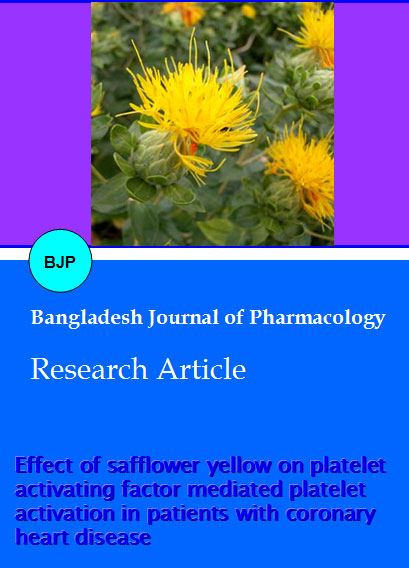