We investigated the effects of fruit and bark extracts of Terminalia arjuna on the rate and contraction of guinea pig heart in vitro. Immediately after killing, the heart was connected to a perfusion apparatus containing oxygenated double-dextrose McWins solution with fresh arjun fruit and bark experimental extracts. The apex of the heart was then connected to a recording drum through a metallic hook and the rate and height (force) of contractions were recorded on a smoked drum. The heights of contraction for fruit extract and bark extract were significantly higher than that for normal saline (p<0.001), while they were significantly lower than that for adrenaline (p<0.01). Addition of verapamil caused a significant blockade in the heights of contraction produced by extracts of T. arjuna (p<0.01), while heart rate was not affected. The cardiotonic effect of T. arjuna was probably mediated through high concentration of Ca++ present in the plant.

Terminalia arjuna (neer maruthu in Tamil and Malayan, commonly called aurjuna or the arjun tree in English) is about 20-25 meters tall, usually has a buttressed trunk and forms a wide canopy at the crown from which branches drop downwards. The Arjun is usually found growing on river banks or near dry river beds in West Bengal, South and Central India and in Bangladesh (Ali et al., 1966; Ali et al., 1979; Basu and Kirtikar, 1987; Biswas et al., 2011; Dwivedi, 2007; Ramchandran, 1992).

Since the studies in mice showing its leaves to have analgesic and anti-inflammatory properties, T. arjuna has found its way in traditional/alternative medicine for treatment of a wide range of human ailments. The arjuna was introduced into Ayurveda as a treatment for heart disease, wounds, hemorrhages, fractures, ulcers, tuberculosis, cough, chronic fever particularly tuberculosis, hemoptysis, urinary tract infections, renal stones, acne, bleeding piles and diarrhea (Ali et al., 1966; Dwivedi, 2007; Chopra et al., 1958; Dastur, 1982). Of these treatments our research interest was related to the reported anti-ischemic, cardiac protective and cardiotonic effects of T. arjuna on the cardiovascular system (Ali et al., 1979; Ramchandran, 1992). In an attempt to elucidate the cardiotonic properties, we investigated the effects of fruit as well as bark extracts of T. arjuna on the rate and contraction of guinea pig heart in vitro.

The study was conducted on guinea pigs of both sexes weighing 500-600 g.  Immediately after killing by a blow on the head the heart along with great vessels were taken out and kept on a petri dish containing McWins solution bubbled with oxygen. The heart was then cleaned of fat and other connective tissues, and was then connected to a perfusion apparatus (Langen-dorff’s apparatus) containing oxygenated double–dextrose McWins solution. The apex of the heart was then connected to a recording drum through a metallic hook and the rate and force of contraction were recorded on a smoked drum. The height of contraction was measured in millimeter and the rate was counted per min by a timer.

Fresh barks and fruits were collected, chopped to small pieces and air dried. It was powdered in iron mortar-pestle and sieved by different types of standard sieves. The well dried powdered products were made ready for pharmacological experiments.

Water extraction of the bark and fruit

Chips of freshly collected barks and fruits were crushed and extracted with water at low temperature (50-60°C). The total extractive was concentrated on water bath and finally dried in desiccators containing CaCl2/silica gel. It was then powdered and sieved.

Extraction of the bark and fruit with organic solvents

Chips of bark and fruits separately (4 kg each) were extracted exhaustively with rectified spirit. The total extractive were concentrated to about 1.5L and it was kept standing in a conical flask. After three days, heavy precipitates from it settled at the bottom which were filtered and dried over CaCl2 in a desiccator. After separation of the solid from the solution, they were concentrated, dried and powdered. They were soluble in water. All chemicals were from BDH chemicals, London and sigma chemicals, London.

Grouping of animals and treatments

These experiments were carried out in the Department of pharmacology of the then IPGMR, Shahbag, Dhaka 1000, in collaboration with BCSIR, Dhaka and Department of Medicine, IPGMR, Dhaka, during the period of 1983-85.

The comparative effects of normal saline and bark extract of T. arjuna on guinea pig heart contraction in vitro are presented in Table II. Compared to fruit extract, the significant effect of bark extract on contraction was more pronounced (p<0.01 and p<0.01).

The comparative effects of normal saline, CaCl2 and verapamil on guinea pig heart in vitro are shown in Table IV and Figure 1. The mean ±  SE of the heights of contraction for CaCl2 alone was highest (p<0.001) and the heart rate of 134 ± 6.7/min were also significantly higher compared to control (p<0.01). Addition of verapamil (1 mg/mL of bath fluid) produced a significant (p<0.001) blockade in the height of contraction produced by calcium ions. The effects of T. arjuna and verapamil on isolated guinea pig heart are shown in Table V and Figure 1. Addition of verapamil (1 mg/mL of bath fluid) caused a significant (p<0.01) blockade in the height of contraction produced by bark extract of T. arjuna.

In the present study, cardiotonic properties was observed which was more pronounced with the water soluble part of alcoholic extract of T. arjuna. The force of contraction of the cardiac muscle was increased without any appreciable change in the rate. The bark of T. arjuna on frog heart and found an increase in the amplitude of contraction without increasing the rate which closely agrees with our observations. In the present experiment it was observed that the increased force of contraction was blocked by veraparmil, a calcium antagonist. This suggests that the cardiotonic effect of T. arjuna is likely to be mediated through the release of intracellular Ca++ ions. It has been found that arjun bark contains high calcium along with other organic acid (arjunic acid, etc.) and glycosidal substances (arjun extract) (Basu and Kirtikar, 1987). Bark is prescribed in traditional system of medicine in heart diseases. The cardiotonic property observed in the present study as well as by others, may therefore be due to this high calcium content and presence of glucosidal and other organic substances in T. arjuna.

The authors thank Prof. A. S. M. Giasuddin, Department of Biochemistry and Immunology, for his suggestions and help during the preparation of the manuscript. Thanks are also due to Mr. Md. Moniruzzaman Khan and Md. Mizanur Rahman for internet browsing and composing the manuscript. 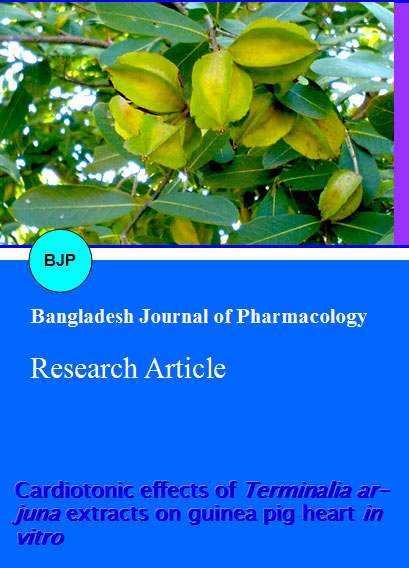