The antitumor activity of the methanol extract of Chondrococcus hornemanni and Spyridia fusiformis against Dalton’s lymphoma ascites (DLA)-induced tumor inoculation as well as its antioxidant activity were studied. The methanol extract of algal biomass given orally to mice (200 mg/kg/day) for 14 days caused significant reduction in body weight, packed cell volume and viable tumor cell count when compared to the mice of the DLA control group. The extract not only increased the survival of animals with ascites tumor, decreased the body weight induced by the tumor burden and reduced packed cell volume and viable tissue cell count, but also altered the hematological parameters. The extract given i.p. daily for 14 days significantly reduced the solid tumor volume induced by DLA cells. Based on the biochemical and hematological parameters, the methanol extract of red algae C. hornemanni and S. fusiformis exhibits potential antitumor activities.

Cancer is a group of more than 100 different diseases characterized by uncontrolled cellular growth, local tissue invasion and distant metastases (Chabner and Collins, 1990) and the free radicals have been implicated in carcinogenesis (Player, 1982). Supportive to this, many plant extracts containing antioxidant principles have been reported to possess antitumor activity (Ruby et al., 1995).

Among natural foods, seaweeds have received much research attention from the researchers in the last decades. This traditional food source maintains good health by providing nutritional benefits and thus helping to treat disease. Some seaweed contains high amounts of essential proteins, vitamins and minerals. Furthermore, many polysaccharides found in seaweeds have diverse biological activities, including effects on the immune system and cancer (Yashizawa et al., 1995). Yamamoto et al. (1987) and Sheu et al. (1996) reported that oral consumption of several seaweeds significantly decreased the incidence of carcinogenesis in vivo. Alekseyenko et al. (2007) suggested that polysaccharide of Fucus evanescens has antitumor and antimetastatic activity in C57BI/6 mice with transplanted Lewis lung adenocarcinoma. Downregulating tissue factor expression, Grateloupia longifolia polysaccharide inhibits angiogenesis in HMEC-1 endothelial cells (Zhang et al., 2006). However, so far no antitumor activity has been reported from these algae. Numerous macro algae have shown potent cytotoxic activities and certain authors have suggested the consumption of algae as a chemopreventive agent against several cancers. Dehydrothrsiferol and halomon extracted from Laurencia and Portieria hornemanii, respectively have been tested in the preclinical phase. Sundaram et al. (2012) studied antitumor activity in Gracilaria edulis. However, so far no antitumor activity has been reported from these algae.

In the present study, we investigated the antitumor activities of the methanolic extract of Chondrococcus hornemanni and Spyridia fusiformis against Dalton’s lymphoma ascites (DLA) induced tumor inoculation along with determining its antioxidant status.

Selection grouping and acclimatization of laboratory animal (Unnikrishnan and  Kuttan, 1990)

Male Swiss albino mice (20-25 g) were produced from animal experimental laboratory, and used throughout the study. They were housed in micro nylon boxes in a control environment (25 ± 2°C) and 12 hrs dark/light cycles with standard laboratory diet and water ad libitum. The study was conducted after obtaining institutional animal ethical committee clearance (IAEC/006/2011). As per the standard practice, the mice were segregated based on their gender and quarantined for 15 days before the commencement of the experiment. They were fed on healthy diet and maintained in hygienic environment in our animal house.

Dalton’s Lymphoma ascites (DLA) cell was supplied by Amala Cancer Research Center, Trissur, Kerala, India. The cells maintained in vivo in Swiss albino mice by intraperitoneal transplantation. While transforming the tumor cells to the grouped animal the DLA cells were aspirated from peritoneal cavity of the mice using saline. The cell counts were done and further dilution were made so that total cell should be 1 x 106, this dilution was given intraperitonealy. Let the tumor grow in the mice for minimum seven days before starting treatments.

In this presentation investigation, drug treatment was given after the 24 hours of inoculation, once daily for 14 days. On the day 14, after the last dose, all mice from each group were sacrificed; the blood was withdrawn from each mouse by retro orbital plexus method. All biochemical investigations were done by using COBAS MIRA PLUS-S auto analyser from Roche, Switzerland  and following parameters were checked.

The fluid (0.1 mL) from the peritoneal cavity of each mouse was withdrawn by sterile syringe and diluted with 0.8 mL of ice cold normal saline or sterile phosphate buffer solution and 0.1 mL of tryphan blue (0.1 mg/mL) and total number of the living cells were counted using hemocytometer.

No. of cells dilution

All the mice were weighed, from the beginning to 15th day of the study. Average increase in body weight on the 15th day was determined.

The experimental results were expressed as the mean ± SEM. The hematological and biochemical parameters were subjected to statistical analysis by one-way analysis of variance to determine the significant difference between the groups. ANOVA was done with GraphPad Prism software. All pairwise multiple comparison procedures by Student-Newman-Keuls method. Data were accepted as statistically significant difference was obtained at p<0.05.

In the DLA tumor control group, the average life span of animal was found to be 50% whereas extracts of C. hornemanni and S. fusiformis at the dose of 200 mg/kg body weight increased the life span up to 72 and 70% respectively. These values were significant (p<0.001). However, the average life span of 5-FU treatment was found to be 92%, indicating its potent antitumor nature. The antitumor nature of extract of C. hornemanni and S. fusiformis was evidenced by the significant reduction in percent increase in body weight of animal when compared to DLA tumor bearing mice. It was also supported by the significant reduction in packed cell volume and viable tumor cell count in both the extent of treatment when compared to the DLA tumor control (Table I).

As shown in (Table II) RBC, hemoglobin, Platelets were decreased and WBC count was significantly increased in the DLA control group compared to the normal control group. Treatment with C. hornemanni and S. fusiformis at the dose of 200 mg/kg significantly increases the hemoglobin content, RBC, platelets and significantly decreased the WBC count to about normal level. All these results suggest the anticancer nature of the C. hornemanni and S. fusiformis. However, the standard 5-FU at the dose of 20 mg/kg body weight produced better result in all these parameters.

The inoculation of DLA cells caused significantly increase in the level of total cholesterol, aspartate amino transferase, alanine amino transferase, alkaline phosphatase in the tumor control animals, when compared to the normal group. The treatment with C. hornemanni and S. fusiformis at the dose of 200 mg/kg body weight reversed these changes towards the normal level (Table III). All the values were found to be significant. The treatment with standard 5-FU also gave similar results.

The present study shows that the methanol extract of C. hornemanni and S. fusiformis significantly inhibited the tumor volume, packed cell volume, tumor (viable) cell count and brought back the hematological parameters to more or less normal levels. It was also found that over sulfated fucoidan inhibited the growth of Lewis lung carcinoma and B16 melanoma in mice, and reported that increasing numbers of sulfate groups in the fucoidan contributes to the effectiveness of its antiangiogenic and antitumor activities (Kim and Kim, 2010).

The reliable criteria for judging the value of an anticancer drug is the prolongation of the life span of animals. In DLA-tumor-bearing mice, a regular rapid increase in ascitic tumor volume was observed (Badami et al., 2003). The DLA-bearing mice orally administered C. hornemanni and S. fusiformis (200 mg/kg body weight) showed no significant change in the average life span compared to animals of the tumor control group. However, in the present study an increase in body weight, packed tumor cell volume and number of viable tumor cells was found to be significantly less than the tumor control animals, indicating the anticancer nature of the extract. These results could indicate either a direct cytotoxic effect of C. hornemanni and S. fusiformis on tumor cells as evidenced by the in vitro studies or an indirect local effect, which may involve macrophage activation and vascular permeability inhibition. Hence, the observed antitumor nature of these algal extracts may be due to the cytotoxic properties. As reported earlier by Rajkapoor et al. (2002) our present study also shows similar results seen after treatment with the extracts. However from the above observations on other parameters, it was concluded that the methanol extract of C. hornemanni and S. fusiformis possesses activity against DLA.

In DLA tumor bearing, a regular rapid increase in ascitic tumor volume was observed. Ascitic fluid is the direct nutritional source for tumor cells and a rapid increase in ascitic fluid with tumor growth would be a mean to meet the nutritional requirement of tumor cells (Prasad and Giri, 1994). Treatment with C. hornemanni and S. fusiformis inhibited the tumor volume, viable tumor cell count and increased the life span of the tumor bearing mice. It may be observed that C. hornemanni and S. fusiformis by decreasing the nutritional fluid volume and arresting the tumor growth increases the life span of DLA bearing mice. Thus C. hornemanni and S. fusiformis have antitumor activity against DLA bearing mice.

Usually, in cancer chemotherapy is the major problems that are being encountered are of myelo suppression and anemia (Price and Greenfield, 1958; Hogland, 1982). The anemia encountered in tumor bearing mice is mainly due to reduction in RBC or hemoglobin percentage and this may occur either due to iron deficiency or due to hemolytic or myelopathic conditions (Fenninger and Mider, 1954). Treatment with C. hornemanni and S. fusiformis brought back the hemoglobin content, RBC and WBC count more or less to normal levels significantly. This clearly indicates that C. hornemanni and S. fusiformis possess protective action on the hemopoietic system.

It was reported that the presence of tumor in the human body or in the experimental animals is known to affect function of the liver. The significantly elevated level of total cholesterol, TG, AST, ALT, ALP in serum of tumor inoculated animal indicated liver damage and loss of functional integrity of cell membrane (Zahan et al., 2011). The significant reversal of these changes towards the normal was carried out by C. hornemanni and S. fusiformis treatments. In the present study, the biochemical examination of DLA inoculated animals showed marked changes indicating the toxic effect of the tumor. The normalization of these effects observed in the serum treated with C. hornemanni and S. fusiformis supported their potent antitumor and hepatoprotective effect. Abirami and Kowsalya (2012) reported haematological and biochemical alterations observed in cancer bearing animals by Ulva fasciata extracts and concluded that it may be due to the reduction of antioxidant level following cancer proliferation.

The methanol extract of C. hornemanni and S. fusiformis was effective in inhibiting the tumor growth in ascitic tumor model.

The author thanks Dr. R. Thevanathan, CAS in Botany, University of Madras, Chennai 25, India for identification of the algae and Dr. N. Chidambaram, K.M. College of Pharmacy, Madurai, Tamilnadu, India, for in vivo study. 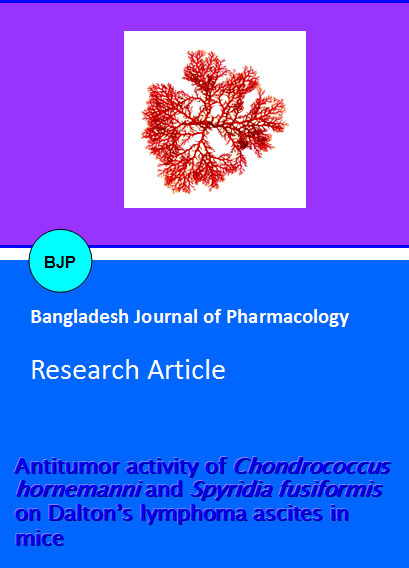