About 2.5-7% of the world's populations diagnosed with leading endocrine disease diabetes mellitus which causes morbidity and mortality (Seghrouchni et al., 2002). By the act of pancreatic α-amylase, starch has hydrolyzed and absorbed as glucose in the small intestine by α-glucosidases, leads to hyperglycemic condition. Moreover, the use of several approaches, α-glucosidase inhibitors is one of the alternative therapeutic approaches. Dietary carbohydrates such as maltose and sucrose absorbed by different types of α-glucosidases viz. maltase, sucrase, glucoamylase and isomaltase present in the intestine. Thus, inhibition of these enzymes can definitely decrease the postprandial hyperglycemia and could be a key tactic in the managements of diabetes mellitus (Hirsh et al., 1997).

The α-glucosidase inhibitors have isolated from natural sources, such as plants, foodstuffs and microbes (Kumar et al., 2011).

Coastal medicinal plants also engage in recreation to treat diabetes, particularly where most people have limited resources and do not have access to modern treatment (Ramanathan, 2000). The main interest of studies in to medicinal plants with hypoglycemic effect is to understand the metabolic activities of human intestinal tract. Citrullus colocynthis used for constipation, edema, bacterial infections, cancer and diabetes.

The aerial parts of the 10 medicinal plants collected from the Southeast coast of India and kept under shade net (50%) house environment. The specimen certified by the Herbaria of C. A. S. in Marine Biology, Annamalai University and Botanical Survey of India (BSI) Coimbatore, Tamil Nadu.

The aerial parts of the plants extracted with n-hexane using a Soxhlet assembly for 48 hours, filtered and last traces of the solvent evaporated under reduced pressure in a rotary evaporator. The resulting extract filtered through filter paper (Whatman No. 1). The experimental chemicals purchased from Sigma-Aldrich Mumbai.

Alpha-glucosidase activity estimated according to the method previously reported by Shibano et al. (1997) with trivial alterations. 50 µL of 0.1M phosphate buffer (with pH of 7.0), 10 µL of test sample and 25 µL of α-glucosidase solution  incubated at 37ºC for 30 min and blanks prepared simultaneously. Then the reaction  terminated by the addition of 100 µL of 0.2 M sodium carbonate solution. The enzymatic hydrolysis of substrate examine by the amount of p-nitrophenol released in the reaction mixture at 410 nm using microplate reader. Controls conduct in an identical manner replacing the plant extract with methanol and β-D-Glucose used as positive control. All experiments carried out in triplicates. The inhibition percentage of α-glucosidase assess by the following formula: α-glucosidase% = 100X (control-sample)/controlwhereas,

To determine the plants extracts inhibition against S. cerevisiae α-glucosidase, with increasing concentration of PNPG (4-nitrophenyl α-D-glucopyranoside) used as substrate in the absence and presence of plant extracts at different concentrations. The data determined by Line weaver-Burk plot analysis of the data (Line weaver, 1934), which calculated from the result according to Michaelis-Menten kinetics.

Coastal plants are most promising source for recent drug development in marine pharmacological research. Earlier reports revealed the basic reason for diabetic mellitus, that the enzyme α-glucosidase participated in biological process like digestion, biosynthesis of glycol-protein and mainly involve in the cleavage of glycosidic bond, as a result increase in blood glucose level leads to chronic hyperglycemia. One of the therapeutic approaches for decreasing postprandial hyperglycemia is to retard absorption of glucose by carbohydrate hydrolyzing enzymes, α-amylase and α-glucosidase inhibition, in the digestive organs (Deshpande et al., 2009). Hence, we evaluated 10 coastal plants to develop such eminent α-glucosidase inhibitors from marine floral resources for reducing wide range of side effects. Among the 10 study plants A. marmelos, C. colocynthis and I. pescaprae showed moderate α-glucosidase inhibitory activity. Ruta graveolens and Casuarina equisetifolia showed less inhibitory activity and salt marsh plants S. monoica, S. maritime, S. nudiflora and Sesuvium portulacastrum did not posses any inhibition against S. cerevisiae α-glucosidase. Acarbose used as positive control which showed low α-glucosidase inhibitory potential with IC50 value of 133 μg/mL (Table I).

Earlier studies, most mammalian α-glucosidase inhibitors did not effectively inhibit microbial α-glucosidases (Oki et al., 1999), because plants and mammalian enzymes are maltostructure, it hydrolyze homogeneous substrate whereas bacterial, yeast, and insect enzymes are maltooligosaccharides show higher activity toward heterogeneous substrates such as sucrose and pNPG, and no activity toward homogeneous substrates (Kimura, 2002; Kimura et al., 2004). Our present result exhibits the strong enzymatic inhibitory activity against yeast α- glucosidases shown by three plant extracts (A. marmelos, C. colocynthis and I. pescaprae) is obviously enhanced than the commercial inhibitor acarbose at low concentration. This will favor that A. marmelos, C. colocynthis and I. pescaprae extracts can decrease blood glucose level. The authors are gratefully acknowledged to the Director and Dean, Faculty of Marine Sciences and authorities of Annamalai University, India for providing all support during the study period.

Anonymous I. Wealth of India. National Institute of Science Communication and Council of Scientific and Industrial Research, New Delhi. 2001; 2: 67-68. 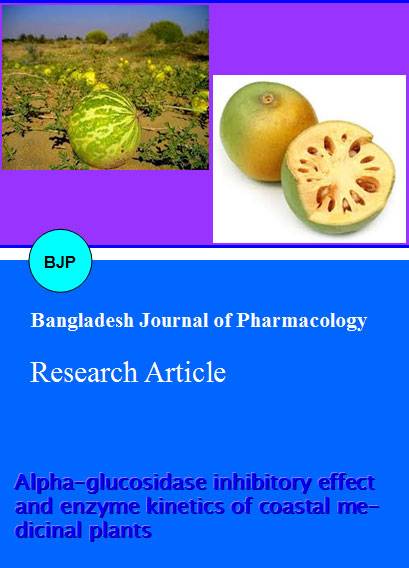