The objective of the present study was to evaluate the anti-cancer effects of taraxerone in non-small cell lung cancer cells (A-549). The effect of this compound on apoptosis and cellular morphology was also studied. MTT (3-(4, 5-dimethylthiazol-2-yl)-2, 5-diphenyltetrazolium bromide) assay was used to evaluate the effect of the compound on cell viability. Cellular morphology after taraxerone treatment was demonstrated by fluorescence microscopy and transmission electron microscopy. The results revealed that taraxerone induced dose-dependent as well as time-dependent growth inhibitory effects on A-549 cell line showing an IC50 value of 53.2 and 61.6 µM at 24 and 48 hours time intervals respectively. It also inhibited cancer cell colony formation in a dose-dependent manner and around 90% of the cancer cells were destroyed by the 125 µM dose of taraxerone treatment. Taraxerone also induced cell shrinkage, chromatin condensation and nuclear membrane rupture which are characteristic of apoptosis.

In the present research work, we report the anti-cancer and apoptotic inducing effects of taraxerone (Figure 1) triterpene in non-small cell lung cancer (A-549) cells. The current report constitutes the first such report on this naturally occurring triterpene.

Chemicals and other reagents

Taraxerone was purchased from Sigma Chemical Company (USA). For in vitro studies, taraxerone was dissolved in dimethyl sulfoxide to create a stock solution (0.1 moL/L), which was stored at -20°C. To prepare working solutions, the stock solution was further diluted with culture media to yield the desired taraxerone concentrations. Control cells were treated with an equal volume of vehicle. The dimethyl sulfoxide concentration was kept below 0.1% in cell culture and did not show any noticeable effect on cell growth or cell death. Dulbecco’s modified Eagle’s medium, fetal bovine serum (FBS), penicillin-streptomycin were obtained from Hangzhou Sijiqing Biological Products Co. Ltd. China. MTT kit was obtained from Roche (USA). Hoechst 33258 was purchased from Beyotime (China). All other chemicals and solvents used were of the highest purity grade.

Human non-small cell lung cancer cell line (A-549) was purchased from the Shanghai Institute of Cell Biology, Chinese Academy of Sciences (CAS, China) and was kept at 37°C in a humidified atmosphere containing 5% CO2. The cells were cultured in Dulbecco’s modified Eagle’s media supplemented with 10% fetal bovine serum and 100 U/mL penicillin and 100 μg/mL streptomycin.

Inhibition of cell growth by taraxerone was evaluated by the MTT assay. Briefly, cells were plated in 96-well culture plates (1 × 105 cells/well). After 24 hours incubation, cells were treated with taraxerone (0, 5, 10, 25, 50, 75 and 125 μM, eight wells per concentration) for 24, 48 and 72 hours, MTT solution (5 mg/mL) was then added to each well. After 4 hours incubation, the formazan precipitate was dissolved in 100 μL dimethyl sulfoxide, and then the absorbance was measured in an ELISA reader (Thermo Molecular Devices Co., USA) at 570 nm.

The cell viability ratio was calculated by the following formula:

Cytotoxicity was expressed as the concentration of taraxerone inhibiting cell growth by 50% (IC50 value).

A-549 cell lines were suspended in 1 mL of DMEM containing 0.5%  agarose (Amresco, USA) and 10% FBS, and plated on a bottom layer containing 1.0% agarose and 10% FBS in 6-well plate in triplicate. After 1 week, plates were stained with 0.5% gentian violet and the colonies were counted under light microscope.

A-549 cell lines were seeded into 12-well plates at a density of 1 x 106 cells/ well in 1 mL medium. After the treatment with the different concentrations (0, 25, 75 and 125 µM) of taraxerone for 48 hours, cell apoptosis was determined by the Hoechst staining kit according to the manufacturer's instruction. After the treatment, cells were fixed with 3.5% polyoxymethylene and then incubated in Hoechst solution for 20 min in the dark. The resulting images were recorded using a UV fluorescence microscope (Olympus, Japan) using UV filter at 400x magnification to detect morphological evidence of apoptosis.

A-549 cell lines were seeded and grown at 5 × 105/mL in three flasks. Cells after treated with different concentrations (0, 25, 75 and 125 µM) of taraxerone for 48 hours were harvested and washed with PBS twice, and then added to 2.5% glutaraldehyde fixative for microtome sectioning using ultramicrotome (LKB-V; JEOL Co; Japan). TEM was carried out with a Transmission Electron Microscope (JEM-2000EX; JEOL Co; Japan).

The experiments were performed in triplicate. Data were expressed as the mean ± standard deviation (SD). Statistical correlation of data was checked for significance by ANOVA and Student's t-test. p<0.05 was considered to indicate a statistically significant difference.

Taraxerone inhibits cancer cell proliferation and colony formation in A-549 cell lines. Initially we verified the cytotoxic activity of taraxerone on A-549 cells by using MTT assay. The results revealed that taraxerone had power fulcytotoxic effects on A-549 cells. It revealed both concentration-dependent as well as time-dependent growth inhibitory effects against these cells (Figure 2). The IC50 value was calculated to be 53.2 and 61.6 µM at 24 hours and 48 hours time interval respectively. Taraxerone also inhibited the clonogenic activity of the A-549 cancer cells by reducing the number of cancer colony forming cells.

Figure 3: Inhibitory effect of taraxerone on human non-small cell lung cancer cells (A-549). The colony formation assay of A-549 cells treated with taraxerone at specified doses

In case of fluorescence microscopy, A-549 cells were stained and evaluated for nuclear shape using a fluorescence microscope with Hoechst 33258 staining (Figure 4A-D). The results revealed that taraxerone-treated cells showed considerable chromatin condensation or dense staining fragmentation called apoptotic bodies, which inferred an early apoptotic event. The presence of such apoptotic bodies was related with taraxerone dose. A-549 cells underwent the morphologic changes typical of apoptosis after treatment with the compound. Figure 4: Effect of taraxerone on the nuclear morphology of A-549 cancer cells using Hoechst 33258 staining at actual magnification 200x. A-549 cells were treated without (A) and with taraxerone 25 μM (B), 75 μM (C), and 125 μM (D) for 48 hours. White arrows represent apoptotic cells exhibiting chromatin condensation and nuclear fragmentation

Further, the effects of taraxerone on A-549 cancer cell morphology were verified by acridine orange/ethidium bromide staining using fluorescence microscopy. The results of this experiment (Figure 5A-D) were similar to other two experiments indicating that taraxerone induces cell death through the intervention of apoptosis. Transmission electron microscopy of A-549 cells after taraxerone treatment

Transmission electron microscopy was used to observe the ultrastructural changes induced by taraxerone in A-549 cells and to assess the intracellular destruction caused by this compound for 48 hours. Taraxerone-treated cells revealed morphological changes characteristic of apoptosis. As shown in Figure 6A-D, clear nuclear fragmentation was found in the treated A-549 cells, while the untreated cells exhibited  a fairly intact morphology. These ultrastructural changes in their morphology was strongly dose-dependent. Current study showed the antitumor effects of taraxerone, a naturally occurring triterpene, against A-549 cells. The study also focused on the effect of this triterpene on apoptosis induction. MTT assay showed that the compound exerted a potent antiproliferative effects which showed strong dose-dependence as well as time-dependence. Taraxerone also led to a significant reduction of cancer cells following treatment with varying doses. Further, fluorescence microscopy revealed that taraxerone was capable of inducing cellular shrinkage and chromatin condensation. This cell shrinkage and chromatin condensation is a hallmark of apoptosis. We used two staining dyes viz., Hoechst 33258 and acridine orange/ethidium bromide, both of which confirmed that taraxerone is a potent apoptosis inducing agent. Transmission electron microscopy showed that taraxerone could induce powerful and dose-dependent nuclear membrane rupture.

Literature survey revealed that taraxerone has been reported to exhibit anticancer effects in human chronic myelogenous leukemia cell line K562 (Biswas et al., 2009). However, the authors did not report the mode of action of this compound in this cell line i.e., whether this compound shows anticancer activity by inducing apoptosis or not. Our current findings report the anticancer and apoptotic effects of taraxerone on a different cell line (non-small cell lung cancer cell line). We also demonstrated its mode of action by studying its effect on apoptosis, and cellular membrane rupture.

Inhibition of cancer development often implicates modulation of signal transduction pathways, resulting in alterations in gene expression, arrest in cell cycle phase distribution or apoptosis. Apoptotic cell death characterizes a universal and highly proficient suicide pathway, considered as a perfect method for eradication of damaged cells (Earnshaw, 1995; Elmore, 2007). Recently, the apoptosis signaling pathway has been revealed to deliver encouraging targets for the development of novel anticancer agents (Khoo et al., 2010). Several plant-based bioactive compounds are known to be chemopreventive agents capable of inducing apoptosis in a number of experimental models of carcinogenesis. Thus induction of apoptosis is considered as a possible mechanism of chemopreventive agents (Moongkarndi et al., 2004). Regulation of apoptotic signaling pathways incorporates a complicated system consisting of several pathways. Many conventional anticancer drugs are currently used in anticancer chemotherapy which are thought to induce cell apoptosis through the stimulation of these pathways (Adams and Cory, 2007). Consequently, the ability of chemotherapeutic agents to induce the apoptotic cell suicide has been recognized as one of the major mechanisms which might serve for the development of novel approaches to treat cancer. There are two apoptotic pathways which have been documented; the intrinsic pathway is principally controlled by the members of the Bcl-2 family proteins (Reed, 2000). Several anticancer drugs function primarily to induce apoptosis in cancer cells and inhibit tumor development. The morphological changes of apoptosis observed in most cell types primarily start with a reduction in cell volume and condensation of the nucleus. In several cases extensive DNA damage leads to activation of cell cycle check points and leads to cell cycle arrest and apoptosis. Dysregulation in the cell division and apoptosis are connected to the development of most cancers (Pietenpol and Stewart, 2002). 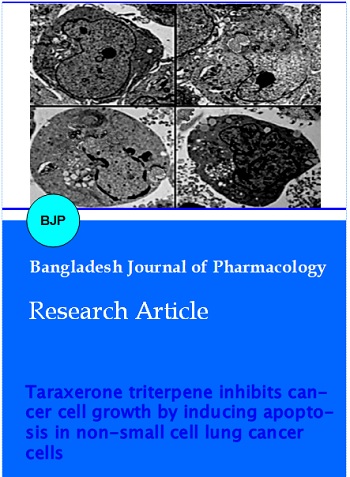