Epilepsy is a central nervous system disorder characterized by rapid and recurrent seizures due to synchronized discharge of neuronal network in brain (Malhi et al., 2014). It is the most frequently found neurological disorder after stroke (Scheuer and Pedley, 1990). About 50 per 100,000 of people are suffering from epilepsy in developed country, while ratio of epileptic patients in developing country is 100 per 100,000. It is estimated that in Pakistan, the prevalence of epilepsy is 9.99/1000 population (Khatiri et al., 2003).

The available antiepileptic drugs not only fail to suppress seizure in some patients but also produce adverse effects (Vyawhare et al., 2007). Furthermore, such drugs do not have satisfactory efficacy, tolerance and toxicity.

The trend of using medicinal plants in epilepsy is gaining success by the approval of the World Health Organization due to milder side effects of plants and the diversity of effective constituents (Kiasalari et al., 2013).

Silybum marianum (family: Asteraceae) commonly known as milk thistle is native to limited region of Mediterranean and spreads throughout Europe (Das et al., 2008). The plant is naturalized in different areas of Pakistan such as Punjab and Khyber Pakhtoon Khwa (Shah et al., 2011).

The plant has potent antioxidant properties due to which it has been used  therapeutically for centuries in the management of liver diseases such as liver cirrhosis, alcoholic hepatitis, liver poisoning, alcoholic fatty liver, and viral hepatitis (Shaker et al., 2010). The active constituents are flavonolignans including silychristin, silydianin and silybin, collectively called as silymarin are also used to treat different neurodegenerative disorders  (Valenzuela and Garrido, 1994, Chtourou et al., 2010). Its antioxidant activity also contributed in cerebral protection as well as prevention in ischemic brain injury due to oxidative stress (Raza et al., 2011).

Oxidative stress is involved in pathogenesis of epilepsy and administration of exogenous antioxidants play role in protection of brain against epileptic seizures (Illhan et al., 2005). Presented study was planned to determine the antiepileptic and antioxidant effect of dried ethanol extract of plant seeds using pentylenetetrazol to induce kindling as well as oxidative stress in mice.

The seeds were dried, grounded and sieved (sieve No 40). Fine powder (500 mg) was soaked in the absolute ethanol (2.5 L) for 7 days.  The extract was dried at room temperature and then dissolved in 0.3% carboxymethylcellulose (Raza et al., 2011).

Kindling in mice was induced using subconvulsion dose of pentylenetetrazol (35 mg/kg) on every alternate day for 22 days. Mice were observed to record convulsion for 30 min according to Erakovic scale (Erakovic et al., 2001). Level of induced seizure in mice was quantified by scoring system. Zero score was allocated to no responses, 1 to ear and facial twitching, 2 for convulsive waves in body, 3 for myoclonic jerks, 4 to generalized clonic convulsions turning to side position, 5 to tonic extensor status epilepticus and 6 to mortality. Mice were declared kindled after 11 pentylenetetrazol injections or showing three time seizures of score 5(Ilhan et al., 2006).

A challenge dose of pentylenetetrazol was administered i.p. (75 mg/kg) to all experimental mice on day 24 and seizures scoring were done using the same Erakovic scale. Latency to tonic clonic seizures (score 5) and lethality was also recorded for 30 min in all groups (Ilhan et al., 2006).

After behavioral observation all the animals were decapitated under ketamine (100 mg/kg) anesthesia (Illhan et al., 2006). Brain was separated from each mice, weighed and washed using sterilized normal saline.

Assay for estimation of lipid peroxides was carried out following Mihara and Uchiyama (1978). Phosphoric acid (0.1%; 3 mL) was added in a test tube containing 1 mL of aqueous thiobarbituric acid (0.6%) and 0.5 mL brain homogenate. Suspension was heated for 45 min. N-butanol (4 mL) was added to the mixture and left for 5 min in standing position. Optical density (OD) values were recorded at 520 nm and 535 nm against butanol as a blank. MDA level (nmol/mg protein) was then calculated from difference of two measurements by using the following equation.

Activity units of enzyme superoxide dismutase were measured following the procedure of Beauchamp and Fridovich (1971). Suspension (0.5 mL) of brain tissue was poured in a test tube having Na2CO3 (50 mM; 1 mL), nitrobluetetrazolium (0.4 mL) and EDTA (0.2 mL). The blank was prepared by adding brain homogenate and all other reagents except hydroxylamine hydrochloride. Absorbance of the reaction mixture was measured using 560 nm wavelength against blank. Then, hydroxylamine hydrochloride (0.4 mL; 1 mmol) poured in reaction mixture and placed in water bath at 25°C. The absorbance was measured after 5 min. At the same time control was run without test material. The SOD activity was measured by the following equation: In the present study, the most abundant naturally occurring flavonoid containing S. marianum seeds extract has been evaluated as a potential new antiepileptic and antioxidative agent. Seizures were significantly reduced in groups treated with 200 and 300 mg/kg doses of extracts than pentylenetetrazol kindled group. At lower doses seizures were not reduced. Moreover 300 mg/kg of dried S. marianum seeds extract was able to reduce mortality, seizure intensity as well latency to tonic clonic seizures against challenge dose of pentylenetetrazol i.e. 75 mg/kg. Biochemical studies revealed that pre-treatment with all of the doses of extracts lowered lipid peroxidation. In addition 200 and 300 mg/kg of SM increased the SOD and CAT activity. It was concluded from present experiment that pre-treatment with plant extract reduced brain damage caused by oxidative radicals.

Numerous studies proved that S. marianum is effective antioxidant in treatment as well as in prevention of some neurotoxic and neurodegenerative diseases. Phytochemical studies reveal that silymarin, a flavonolignans isolated from S. marianum, has an antioxidant activity as well as free radical scavenging characteristics in vitro (Fu et al., 2009). It has shown that the dose of 200 mg/kg of silymarin has been found effective in ameliorating the lipid peroxide and free radical generation against focal cerebral ischemia (Raza et al., 2011). It was observed from present findings that seizures were reduced by using medicinal plant extract. Results were strengthened by antioxidant activities of plants like Ginkgo biloba extract (EGb 761) (100 mg/kg po) and Ferula assafoetida gum extract (25, 50 and 100 mg/kg) controlled epileptic seizures against pentylenetetrazol induced seizures in mice (Illhan et al., 2006 and Kiasalari et al., 2013). In addition it was also revealed that Ginkgo biloba (EGb 761) (100 mg/kg po) also significantly reduced convulsive behavior (seizure intensity, seizure latency) against same challenge dose (Illhan et al., 2006).

The results of reference drugs were also similar i.e. 100 mg/kg of valproic acid could effectively decrease seizure intensity in pentylenetetrazol kindled mice (Kiasalari et al., 2013). However a difference was found with earlier research that against 75 mg/kg of pentylenetetrazol dose, the pre-treatment of valproic acid did not significantly decrease seizure intensity. This discrepancy could arise from multiple factors i.e. change in laboratory conditions etc. Though increased in latency to score 5 (tonic clonic seizure) was observed similar to previous research (Illhan et al., 2006). In accord findings have been reported by Jain et al. (2011) that valproate inhibited development of kindling. Antiepileptic agents including phenytoin, carbamazepine and phenobarbitone cause imbalance in oxidation and antioxidation levels. Therapy with such drugs had resulted in higher MDA and lower GSH levels in brain tissue (Ilhan et al., 2005). According to findings of present study, plant extract raised CAT level in brain. Although many antiepileptic drugs are being introduced but efforts to develop novel antiepileptic drugs with distinctive mechanism of actions and least side effects are still considered unsuccessful (Loscher, 2011). Research has been initiated for antiepileptic activity in plants which possess multiple mechanisms of actions with minimum side effects (Shenoy et al., 2012).

It is reported that pentylenetetrazol has an important role in development of epileptic seizures via mechanism of blocking GABAA receptors (Rebrov et al., 2004). The extracts of S. marianum seeds are rich in many phytochemicals especially phenols and flavonoids (Atraqchi et al., 2014), which are thought to exert anticonvulsion effects by modulating channels (Diniz et al., 2015). Therefore, flavonoid compounds with antioxidant properties might be an additional candidate by which the anticonvulsant effect of valproic acid is occurred. As Nassiri-Asl et al., (2008) postulated that herbal medicines act as potential therapeutics in management of GABAA receptors mediated diseases.

Experiments were carried out following procedures of care and use of animal for scientific purposes, National Advisory Committee for Laboratory Animal Research.

Valenzuela A1, Garrido A. Biochemical bases of the pharmacological action of the flavonoid silymarin and of its structural isomer silibinin. Biol Res. 1994; 27: 105-12. 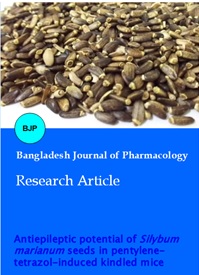