In the present study, the effect of ludartin on OVCAR5 ovarian carcinoma cells was investigated. MTT cell assay was used for the analysis of cell viability and wound healing assay for migration potential. Results revealed that ludartin treatment at 10 and 30 µM doses reduced the cell viability from 94 to 38%. The invasive potential was decreased from 62 to 24% with increase in ludartin concentration from 10 to 30 µM. Western blot analysis showed that ludartin treatment reduced the expression of p-FAK in OVCAR5 cells significantly. Ludartin treatment for 48 hours also caused a significant decrease in the expression of MMP-2 and MMP-9 in OVCAR5 cells at a concentration of 30 µM. The metastatic regions were absent in the rats treated with 30 µM/kg doses of ludartin daily for 15 days.  Thus, ludartin treatment inhibits the proliferation, invasion and migration of ovarian cancer cells through down-regulation of pFAK and MMPs, therefore can be used for the treatment of ovarian cancer.

Ovarian carcinoma constitutes one of the commonly detected cancer of reproductive tract in females and is associated with high rate of mortality. The 5 year survival rate of the ovarian cancer bearing women is very low (<30%) (Raki et al., 2006). Failure to detect the ovarian cancer at an early stage and dearth of effective treatment strategies hinders its treatment (Bertone-Johnson, 2005). Thus, the identification of a molecule which can effectively inhibit ovarian cancer is highly desired.

Sesquiterpene lactones have been the subject of interest for researchers throughout the globe because of a broad spectrum of biological activities. Ludartin is the position isomer of arglabin isolated from Artemisinin magdalena has been reported to possess gastric cytoprotective activity (Blanco et al., 1997). It has also been reported to inhibit the activity of aromatase enzyme which plays an important role in the breast cancer (Blanco et al., 1997; Muftuoglu and Mustata, 2010). Taking into account the biological activity, the structure activity relationship studies of ludartin have also been performed with the aim to develop potential anti-cancer drug.

Ludartin was purchased from Sigma Chemical Co. (USA). RPMI 1640 medium was supplied by Gibco BRL (USA) whereas the penicillin and streptomycin were purchased from North China Pharmaceutical Group Corp. (China).

OVCAR5 human ovarian cancer cell line was purchased from the American Type Culture Collection (USA). The cells were cultured in Dulbecco's-modified Eagle's medium (DMEM, Gibco, USA) supplemented with 10% fetal bovine serum (Hyclone, USA) along with penicillin (107 U/L) and streptomycin (10 mg/L). Incubation of the cells was performed at a temperature of 37°C in a humidified atmosphere of 5% CO2.

Into the 96-well matrigel (BD Biosciences, China) coated plates, OVCAR5 cancer cells at a density of 2 x 105  cells/well were seeded. The cells were incubated with 0, 10, 20 or 30 µM concentrations of ludartin for 48 hours. The cells after adherence for 1 hour to the matrigel were washed with ice-cold PBS to remove the non-adherent cells. The proportion of cells adhered to matrigel in ludartin treated plates was compared to the control cell plates.

Into the bottom and top layers of the Transwell chamber (pore size, 5 µM) was placed DMEM supplemented with 10% FBS and without FBS, respectively. The density of OVCAR5 cancer cells in the suspension was maintained at 2 x 105 cells/mL. From this cell suspension, 50 µL was put into the upper chamber of the Transwell chamber and incubated for 48 hours with ludartin. After incubation, the adhered cells in the interior chamber were harvested, fixed in 10% formalin and then subjected to Giemsa staining. The proportion of the cells migrated through the membrane was calculated to determine the membrane penetration rate.

In the wound healing assay, OVCAR5 cancer cells were seeded onto 6-well plates (BD Biosciences, China) and grown to confluent monolayers. The cells were cultured for 12 hours in RPMI-1640 medium in the absence of FBS. A wound area was produced using a pipette tip through the center of the well followed by washing with serum-free RPMI 1640. Ludartin at various concentrations (0, 10, 20 or 30 µM) was added to each well of the plates and the plates were incubated for 48 hours. The images of the wound area were then captured digitally at three randomly selected areas.

OVCAR5 cancer cells were incubated with various conditions of ludartin and then lysed using cell lysis buffer (Epitomics, USA) with 1 mM phenylmethyl sulfonyl fluoride (Sigma-Aldrich, USA) and 20 μL/mL protease inhibitor mix (GE Healthcare, UK). The cell lysates were subjected to centrifugation at a temperature of 4°C at 14,000 x g for 20 min. The concentration of proteins in the supernatants was determined using bicinchoninic acid protein assay kit (Pierce, USA). Protein extracts along with 2x Laemmli sample buffer were heated to 95°C for 3 min and the 20 μg samples were then isolated on SDS polyacrylamide gel (Bio-Rad Laboratories, USA) by electrophoresis. The proteins were then transferred overnight onto immobilon-P polyvinylidene fluoride membrane (Millipore) blocked with 5% non-fat dried milk in TBS-T (50 mM Tris, 150 mM NaCl with 0.1% Tween-20). The membranes were incubated with antibodies against MMP-2 (1:1000), MMP-9 (1:500), p-FAK (1:500), β-actin (1:1000; house-keeping protein) (Cell signalling, China) and FAK (1:250) (R and D, China) for overnight at 4°C. After incubation, the membranes were washed with PBS followed by 1 hour incubation with horseradish peroxidase-conjugated anti-mouse IgG (GE Healthcare) diluted 1:5000 in TBS-T. The antibody-bound proteins detection was performed by enhanced chemiluminescence system (GE Healthcare).

Establishment of ovarian cancer in vivo

Female Sprague-Dawley rats were administered with 1 x 105  OVCAR5 cancer cells into back side of the body. The developed tumors were sliced into thin sections and implanted into the right ovary by laparotomy. Both extraction and implantation of the tumors were performed after rats were anesthetized using sodium sorbitol. After 7 days of tumor implantation, 10 rats in the treatment group were intraperitoneally injected 30 µM/kg doses of ludartin daily for 15 days. The control group of rats were given the same volume of normal saline. The animals were sacrificed on day 16 after the start of treatment under anesthetized conditions using sodium sorbitol to extract liver, lungs, kidneys and intestine. The tissues were fixed in 10% neutral-buffered formalin and embedded in the paraffin. The paraffin embedded tissues were cut into thin sections, deparaffined in boiling xylene, stained using H and E and then analyzed for histopathological changes.

Figure 1: Reduction in the rate of proliferation in OVCAR5 cells by treatment with ludartin for 24, 48 and 72 hours. The effect of ludartin on proliferation rate of OVCAR5 cells was analyzed by MTT assay. The results expressed are the mean ± SEM. ap<0.05 compared with the control The results from wound healing assay showed inhibition in the migration potential of OVCAR5 cells by ludartin treatment. With the increase in concentration of ludartin from 10 to 30 µM, there was decrease  tendency of OVCAR5 cells to penetrate the gap as recorded from 43 to 6% after 48 hours (Figure 3).

Figure 3: Effect of ludartin at various concentrations on migration potential of OVCAR5 cells. The cells after ludartin treatment were analyzed for cell migration using wound healing assay. bp<0.05 compared with the control cells

Results from Western blot analysis showed that ludartin treatment reduced the expression of p-FAK in OVCAR5 cells significantly compared to control cells (Figure 4). Ludartin treatment for 48 hours led to a significant (p<0.005) decrease in the expression of MMP-2 and MMP-9 in OVCAR5 cells at a concentration of 30 µM (Figure 4). Figure 4: Inhibition of FAK, pFAK, MMP-2 and MMP-9 expression in OVCAR5 cells by ludartin treatment. The cells after incubation with ludartin or DMSO (control) were subjected to western blot analysis using β-actin as internal control

Histopathology of rats with orthotopic tumors Figure 5: Histopathological examination of lung and intestinal tissues of rats bearing orthotopictumours following ludartin treatment. The rats in the treatment group were given 30 µM/kg doses of ludartin for 15 days daily. The lung and intestinal tissues were stained using HE staining and then subjected to histopathological examination

The present study shows that ludartin treatment inhibited the proliferation and reduced adhesive, invasive and migration potential of ovarian cancer cells through inhibition of p-FAK and MMP-9 expression.

One of the characteristic feature of aggressive tumors is that following separation the cells adhere to the receptors present in cell membranes which facilitates the cell migration and invasion (Zhang and Wang, 2006; Cattaruzza and Perris, 2005). There are reports that inhibition of carcinoma cell adhesion using various chemotherapeutic agents plays an important role in cancer treatment (Efferth et al., 2001; Huang et al., 2007; Buommino et al., 2009).

Ludartin treatment inhibits the proliferation, invasion and migration of ovarian cancer cells through down-regulation of pFAK and MMPs. Thus, ludartin can be used for the treatment ovarian cancer. 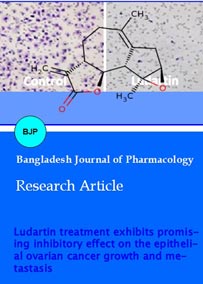