Antimicrobial and cytotoxic activities of Barleria prionitis and Barleria grandiflora: A comparative study

Leaf juices as well as leaves of Barleria prionitis and Barleria grandiflora are being used by rural people across various regions of India in the treatment of oral ailments such as dental troubles, gum ailments, pyorrhoea, dental carries and mouth ulcers. Zone of inhibition and MIC values obtained for all the extracts suggest ethanolic extract of the herbs were more antimicrobial when compared to the aqueous extract. Results of biofilm suppression were found statistically significant (p<0.05) when compared to control. Cytotoxicity was evaluated by MTT assay on human gingival fibroblast and human dermal fibroblast cell lines for ethanolic extract of the herbs. CTC50 value was found to be more than 1,000 µg/mL for ethanolic extracts of both herbs. Chlorhexidine was found to be more cytotoxic with CTC50 value of 12.5–25 µg/mL. Ethanolic extract of B. prionitis and B. grandiflora found significantly cytotoxic (p<0.05) in comparison with control.

Alternative system of medicine largely comprises of the use of plants and plant derived products (Banerjee et al., 2012; Singh and Dubey, 2012; Rawat et al., 2010). Genus Barleria L. belonging to family acanthaceae largely comprises of more than 300 species of shrubs and herbs. These species are mainly found in Asia and Africa (Balkwill and Balkwill, 1998). India is represented by 26 to 32 species, one subspecies and one variety (Shendage and Yadav, 2010; Karthikeyan et al., 2009; Balkwill and Balkwill, 1997).

B. grandiflora Dalz is an another species of this genus, leaves of which are being chewed by rural population across central India for the treatment of mouth ulcer, stomatitis and gingivitis (Sawarkar et al., 2009; Salunkhe et al., 2013; Jayanthi et al., 2014). Literature survey reveals that although these plants and their extracts evaluated for a number of pharmacological activities, not much of the work has been reported towards their usefulness in oral ailment.

The present study aimed to compare the usefulness of leaf extracts of B. prionitis and B. grandiflora in treatment of oral ailment like aphthous ulcers.

The herbs had been collected in October, 2014 (flowering stage) from a rural region of Amravati district of Maharashtra (India). The herbs had been identified and authenticated by Prof. Ranjana Mishra, Department of Botany, Durg Science College, Durg (Chhattisgarh). Latter, leaves of B. prionitis and B. grandiflora were collected in February, 2015 (fruiting stage), dried in shade, powdered and used for extraction.

Human gingival fibroblast and human dermal fibroblast cell lines had been used for cytotoxicity study. DMEM supplemented with 15% FBS, streptomycin (100 µg/mL), penicillin (100 U/mL) and amphotericin B (0.25 mg/mL) was used for maintaining the cell lines. Both the cell lines maintained at 37.1°C with 2.1% CO2 and relative humidity of 44.4% in an incubator.

The antimicrobial activity against bacterial and fungal strains was performed for comparing the effectiveness of the extracts of both the herbs. The antimicrobial activity of the extracts had been evaluated against oral infectious microbial strains, S. aureus, S. mutans, L. sporogens and C. albicans by agar well diffusion method (Ahmad et al., 1998; Perumalsamy and Ignacimuthu, 2000; Werner et al., 1999). The bacterial cultures and fungal culture had been prepared in nutrient broth  agar and Sabouraud dextrose agar respectively by pouring sufficient amount of strains aseptically. The sterile borer (8 mm) was used to make wells in petri plates. All the extracts were mixed in DMSO for obtaining final concentration of 5 mg/mL. The wells had been filled with 1 mL of extracts and compared with chlorhexidine (50 µg/mL) for antimicrobial potential. All the plates were incubated for 24 hours at 37°C.  After 24 hours of incubation the zone of inhibition measured in mm. DMSO had been used as control.

Microdilution method with slight modifications (Sarker et al., 2007) was used for determining the MIC for the extracts, chlorhexidine and control. DMSO was used for diluting the extracts and chlorhexidine. All the extracts were diluted further with sterile normal saline for obtaining serial dilutions as 5000, 2500, 1250, 625, 312.5, 106.2, 53.1 and 26.5 µg/mL. The positive standard chlorhexidine was diluted for obtaining serial dilutions as 50, 25, 12.5, 6.2, 3.1, 1.0, 0.5 and 0.2 µg/mL. The control was prepared using DMSO and sterile normal saline. The row of wells designated for extracts and standard had been pipetted with 240 µL of the extracts and chlorhexidine. Similarly, 240 µL of control had also been pipetted in to designated wells. These wells had been added with 10 µL of resazurin indicator solution. Preparation of resazurin indicator solution was done by dissolving 270 mg of resazurin in 40 mL of distilled water.  Further, 30 µL of nutrient broth and Sabouraud dextrose broth had been pipetted into the wells with respect to the microbial culture to be inoculated. Finally, 10 µL of bacterial or fungal culture had been added to each well. The plates then incubated for 24 hours at 37°C. The MIC taken as the minimum concentration at which color changes from purple to pink or colorless.

All the results had been expressed as mean ± standard deviation. Results of biofilm suppression and cytotoxicity were further analyzed using one-way ANOVA followed by Dunnett multiple comparison test.

Antimicrobial activity and determination of MIC

Biofilm suppression determined by microtiter biofilm formation assay is a qualitative and quantitative method to study the biofilms. Biofilms are large colonies of microorganisms surrounded by fluid-filled channels and regarded as the one of the major factors responsible for antibiotic tolerance and resistance. Staining agent crystal violet, will impart violet coloration to the biofilms formed during the assay. In presence of antimicrobial component, the violet coloration will be lesser when compared to control, which can be quantified by reading absorbance values of the test solutions and standards using microcuvetes.

Step 1: The overnight cultures bacteria and the fungus had been diluted to 1:100 respectively in Mueller Hinton broth and Sabouraud dextrose broth. Each well, seeded with 100 μL of bacterial and fungal cultures. The microtitre plate had been incubated at 37°C for 24 hours.

Step 2: Two gentle washings were given by sterile distilled water to remove bacterial and fungal cells on the surface or unbound cells.

Step 4: Contents of the wells were discarded after incubation.

Step 5: 100 µL of staining agent (0.1% crystal violet) was added to each well and incubation had been carried out at room temperature for 15 min.

Step 7: 125 µL of acetic acid (30%) was used for the destaining of microbial cells. The destaining was carried out for 15 min.

Step 8: Quantification of biofilm was done by transferring the contents of the wells to another microtiter plate and by taking the absorbance readings at 600 nm using spectrophotometer.

Step 9: Percentage inhibition of the biofilm was determined by using the formula,

MTT assay is an in vitro method to study cytotoxicity. The method evaluates the cellular metabolic activity resulting into formation of dark purple colored formazan. MTT is converted into formazan due cellular mitochondrial dehydrogenase enzyme.

Step 2: The initial stock solution of test extracts (10 mg/mL) was prepared by dissolving in DMSO and subsequent dilutions had been made in serum free medium.

Step 4: The dilutions (100 µL/ well) added to cells. The plates had been further incubated at 37.1°C with 2.1% CO2 and relative humidity of 44.4%. Cell control (prepared by mixing equal volumes of DMSO and serum free media) had also been maintained.

Step 5: After 24 hours incubation, the morphological changes of the cells were observed. The cytotoxicity was determined by MTT assay. At this stage, the content of the wells was removed gently and 100 µL of MTT solution was added to each well.

Step 7: After incubation, the cell supernatant was removed and cell monolayer was washed with PBS twice.

Step 8: Finally, 100 µL of DMSO was added to each well to extract out the cell bound dye and incubation was carried out for 15 min. The absorbance was measured using spectrophotometer at 540 nm.

Step 9: The % cytotoxicity was calculated from absorbance values of treated and control groups. The CTC50 values for the sample were calculated from the dose response curves by linear regression analysis.

The percent cytotoxicity was calculated by using formula:

Figure 1: Cytotoxicity activity of the ethanolic extract of B. prionitis (A), B. grandiflora (B) andchlorhexidine (C) on the human gingival fibroblast and human dermal fibroblast cell lines by MTT assay

Statistically both B. prionitis and B. grandiflora were found significant when compared to control (p<0.05).

Therapeutic treatments of aphthous ulcer include use of anti-inflammatory agents, immunomodulatory drugs, antibiotics, antioxidant and others. The study was undertaken to authenticate the use of B. prionitis and B. grandiflora in treatment of oral ailments such as gingivitis, stomatitis and mouth ulcer by rural people across some regions of India. Oral infections such as dental carries, periodontal diseases, aphthous ulcers and peri implant diseases are known to cause by some microbes like Enterocococcus faecalis, S. aureus, S. mutans, Escherichia coli and C. albicans due to the formation of biofilm (Filoche et al., 2010).

The therapeutic efficacy of the herbs is attributed to various chemical constituents present in them. B.  prionitis is reported to have phytochemicals like glycosides, anthraquinone, saponins, flavanoids and phenolic compounds.

B. grandiflora has been reported to have phytochemicals like glycosides, anthraquonone, saponins, flavanoids and phenolic compounds (Sawarkar et al., 2009). B. grandiflora yet not been investigated for the isolates. It is a well established fact that biological activities of the crude drugs are due to phytochemicals present in it. Thus it would be a possibility that the antimicrobial activity, biofilm suppression and cytotoxic potential of these herbs may be due to one or more phytochemicals present in them.

The usefulness of B. prionitis and B. grandiflora in treatment of oral ailments may be due to their antimicrobial and cytotoxic potential. Ethanolic extracts of both the herbs were found to be having more antimicrobial potential than to that of aqueous extracts and found less cytotoxic than chlorhexidine.

Sarker SD, Nahar L, Kumarasamy Y. Microtitre plate-based antibacterial assay incorporating resazurin as an indicator of cell growth, and its application in the in vitro antibacterial screening of phytochemicals. Methods 2007; 42: 321–24.

Singh A, Dubey NK. An ethnobotanical study of medicinal plants of Sonebhadra district of Uttar Pradesh, India with reference to their infection by foliar fungi. J Med Plants Res. 2012; 6: 2727-46. 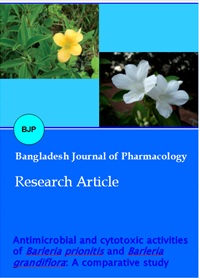