The present study was aimed at to demonstrate the antitumor effects of syringin in HeLa human cervical cancer cells. Its effects on apoptosis, cell cycle phase distribution as well as on cell migration were also examined. The effect on cell proliferation was evaluated by MTT assay, while as effects on colony formation were assessed using clonogenic assay. Syringin inhibited cancer cell growth in HeLa cells in a time-dependent as well as in a concentration-dependent manner. Syringin also led to inhibition of colony formation efficacy with complete suppression at 100 µM drug dose. Syringin could induce G2/M cell cycle arrest along with slight sub-G1 cell cycle arrest. HeLa cells began to emit red fluorescence as the dose of syringin increased from 0 µM in vehicle control to 100 µM. Syringin also inhibited cell migration in a dose-dependent manner with 100 µM dose of syringin leading to 100% inhibition of cell migration.

Cancer, which is a result of uncontrolled growth of cells, is the main cause of deaths throughout the world. Primary cancer in the due course of time gets transformed into malignant cancer via a sequence of physiological changes. The malignant tumor then spreads to other parts of the body through cell migration and invasion. Metastasis is the most important cause of morbidity and mortality for patients with malignant tumors (Hanahan and Weinberg, 2011; Liotta, 1984). Cervical cancer is the fourth prominent cause of cancer-related deaths and the third most commonly found cancer in women globally (Jemal et al., 2011; Boutas et al., 2014). Most of the cervical cancer-related deaths occur in developing countries while as developed countries are not so much affected by the disease.

In China, the incidences of cervical cancer have significantly increased recently (Wang et al., 2012). Various risk factors have been recognized to cause cervical cancer including human papilloma virus (HPV) infection, which has been reported to be accountable for more than 90% of the cervical cancer cases (Kumar et al., 2007; Dunne and Park, 2013; World Cancer Report, 2014).

The cell proliferation studies of syringin on HeLa cells was assessed by MTT cell viability assay as previously reported (Chen et al., 2013). HeLa cells (2 x 105 cells/well) were sowed into a 96-well plates for a time period of  24 hours and then incubated with increasing doses of syringin (0, 2.5, 5, 10, 25, 50, 75 and 100 µM) for a time period of 24, 48 and 72 hours. After syringin treatment, the medium was replaced with MTT dye (5 mg/mL) was added for 2 hours. The vehicle control in this experiment was taken by DMSO, and the cytotoxicity of syringin was compared with vehicle control of DMSO. After incubation the insoluble formazan crystals were dissolved in ethanol and the absorbance was taken at a wavelength of 490 nm by a microplate reader (ELX 800; Bio-tek Instruments, VT, USA).

The impact of syringin on the colony formation tendency in HeLa cells was evaluated by clonogenic assay using Giemsa staining. Briefly, about 400 HeLa cells were plated into each well of 6-well plates and then put for incubation for 72 hours at 37°C. These cells were treated with varying concentrations of syringin compound (0, 10, 50 and 100 µM), after that, these cells were washed three times with PBS and ultimately tainted with Giemsa dye solution. A light microscope was used to count the number of colonies formed in different groups.

The colony formation efficacy was measured as:

HeLa human cervical carcinoma cells (2 x 106 cells/mL) were seeded in 60 mm dishes and then subjected to the treatment of increasing doses of syringin (0, 10, 50 and 100 µM) and incubated for 48 hours. Subsequent to syringin treatment, HeLa cells were first produced and then set with 70% ice-cold ethanol. These cells were treated with RNase A (10 μg/mL) (Bio-Rad Laboratories, Hercules, CA, USA), tainted with 10 μg/mL propidium iodide (PI), and finally examined using Flow Cytometer (FACSCalibur; BD Biosciences), the data were evaluated using Cell Quest software.

In order to study the effects of syringin on the apoptosis-related morphological alterations in HeLa human cervical cancer cells, fluorescence microscopy by acridine orange/propidium iodide double staining was used. In brief, HeLa cells at a density of 2 x 106 cells/mL were seeded in 50 cm2 culture flasks and then treated with 0, 10, 50 and 100 µM dose of syringin for 48 hours. The cells were then tainted with 10 μg/mL acridine orange and 10 μg/mL propidium iodide and the cells were again subjected to incubation for 30 min. The photographs were taken by using a fluorescence microscope (Olympus, Japan) at a magnification of x300.

Human cervical cancer cells (HeLa) (1 x 106 cells/mL) were seeded in 24-well plates and incubated at 37°C till 100% confluent monolayer of cells was accomplished. A straight cell-free wound was created using a 50 mL pipette tip. To each well, increasing doses (0, 10, 50 and 100 µM) of syringin were added and these cells were washed with PBS to remove any cell debris present. The cells were tainted using 0.50% crystal violet powder for 20 min. DMSO alone was set as the vehicle control of the experiment. The randomly chosen fields were selected and photographed by using a light microscope (Olympus, Japan). The percentage of cells that transferred into the scratched area was calculated and length of wounds was determined by Image J (version 1.46) software.

Data was presented as the means ± SEM. The differences between groups were analyzed by means of one-way ANOVA with Tukey's post hoc tests. A p-value <0.05 was considered to be statistically important. All experiments were repeated for a minimum of three times.

Figure 1: A: Chemical structure of syringin, B: Inhibition of cell growth induced by syringin in HeLa cervical cancer cells. Data are shown as the mean ± SD of three independent experiments. ap<0.05, bp<0.01 vs 0 µM (control)

Figure 2: Inhibition of colony formation in HeLa cervical cancer cells induced by syringin. The cells were treated with 0 (A), 10 (B), 50 (C) and 100 µM (D) of syringin and the number of colonies were counted by light microscope Figure 3: Syringin induces G2/M cell cycle arrest in HeLa human cervical cancer cells. The cells were treated with 0 (A), 10 (B), 50 (C) and 100 µM (D) of syringin for 48 hours, stained with propidium iodide and then analyzed using flow cytometry. The cell population of G2/M phase shows a significant increase with increasing dose of syringin

The results indicated that as compared to the control cells, which exhibited complete green fluorescence (Figure 4A), syringin-treated cells, on the other hand, exhibited red fluorescence. The intensity and the number of cells exhibiting red fluorescence increased with increasing syringin dose. Apoptotic cells mostly emit red fluorescence due to the ruptured cell membrane. The results indicate that as compared to the untreated control cells which showed no change in the cell migration (Figure 5). On the other hand, syringin-treated cells at various doses of 10, 50 and 100 µM showed evident signs of cell migration inhibition in a dose-dependent manner. At 100 µM dose of syringin, the cell migration was inhibited completely. Figure 5: Syringin inhibits cell migration in HeLa human cervical cancer cells. The cells were treated with 0 (A), 10 (B), 50 (C) and 100 µM (D) of syringin. The number of cells that migrated into the scratched area was photographed (x 80) at 0 and 12 hours time intervals and calculated as a percentage of migration

The results indicated that syringin exhibits growth inhibition of HeLa cervical cancer cells in a dose-dependent as well as time-dependent manner. The incubation times had a profound effect on the HeLa cell viability. Further, using colony formation assay, it was seen that syringin could inhibit the colony formation tendency of these HeLa cells. It was observed that at 100 µM dose of syringin, no visible colonies were observed on the plates indicating a complete inhibition of cancer cell inhibition by syringin. Further, it was also observed that syringin could also cause G2/M phase cell cycle arrest in these cells. At the same time, the fraction of sub-G1 phase cells was also observed to increase in comparison to vehicle control as the dose of syringin was increased. The fact that syringin induced apoptosis-related morphological features in HeLa cells were monitored under a fluorescence microscope. In comparison to vehicle control cells which displayed complete green fluorescence (intact cells emit green fluorescence), syringin-treated cells on the other hand displayed red fluorescence (apoptotic cells emit red fluorescence). Both intensity and the number of cells exhibiting red fluorescence increased with increasing syringin dose. Apoptotic cells typically emit red fluorescence due to the ruptured cell membrane.  Syringin also inhibited cell migration in a dose-dependent manner.

The main source of anti-cancer drugs used clinically accounting for about 60% of them are natural product based. Most of the natural products have the capability to induce apoptosis in tumor cells. Programmed cell death or apoptosis is a highly specific biochemical mechanism through which living organisms get rid of their damaged cells. In the case of cancer cells, the induction of cell apoptosis plays a key role as it helps in the prevention, management as well as treatment of different tumors. Apoptotic dysfunction is associated with numerous diseases, in particular, cancer. Anti-cancer effect of oleanolic acid methyl ester derivative in HeLa cervical cancer cells is mediated through apoptosis induction and reactive oxygen species production (Song et al., 2015). Many of the natural products even have the ability to induce anti-cancer effects by interfering with the cell cycle arrest (Newman and Cragg, 2012; Moongkarndi et al., 2004; Liu et al., 2015). 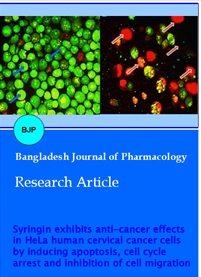