High rate of resistance among Staphylococcus infection initiates scientists to discover new antibiotics. The objective of this study is to determine the effect of tannins isolated from the Pimenta dioica leaves on Staphylococcus aureus and methicillin resistant S. aureus as well as to evaluate their effect on hemolysin production. The antimicrobial activity of 4,6-(S)-hexahydroxydiphenoyl-(α/β)-D-glucopyranose and casuarinin, pedunculagin and nilocitin tannins from P. dioica was examined using agar diffusion method. Moreover, minimum inhibitory concentrations were evaluated by microtiter plate assay method. Pedunculagin and nilocitin exhibited antibacterial and antihemolytic effect against S. aureus. This will open the era for in vivo assessment of such compounds for clinical applications.

Antimicrobial resistant among pathogenic bacteria has been increased during the past decades due to the misuse and the extended use of antimicrobials. Gram positive bacterial infection especially with Staphylococcus aureus and methicillin resistant S. aureus (MRSA) is categorized as one of the main causes of nosocomial infection (Lyer et al., 2014).

S. aureus are opportunistic pathogens as they can invade human body and cause a wide variety of acute and chronic infections. It is the main cause of skin and soft tissue infections as furuncles, carbuncles, boil, abscesses and wounds infection (Brackman et al., 2015). Mild infection of S. aureus may disseminate through the body leading to severe infections. The severity of S. aureus infection depends mainly on the exposure to virulence factors as protease, lipase, hemolysin, and toxins. S. aureus has developed resistance over the past few decades to many antimicrobial drugs (McCaig et al., 2006). The elevated levels of S. aureus resistance encouraged the search for new therapeutic alternatives derived from various sources to manage S. aureus infection.

Plants constituents represent an important source for antibacterial legends as tannins, flavonoids and volatile oil. Tannins are water soluble polyphenolic compounds with high molecular weight as well as they are widely distributed in a large number of higher plants and human diet. They have the ability to form complexes with proteins (Ozdal et al., 2013). Tannins get an intense focus of research interest due to their health-beneficial effects especially in the treatment and prevention of several infectious diseases (Scalbert, 1991).

Pimenta dioica (L.) Merr, syn. P. officinalis (L.) Berg belonging to the family Myrtaceae and is communally known as allspice, pimenta, pimento, clove pepper and Jamaica pepper. The plant is the native to the Southern Mexico  and Central America (Riffle, 1998) but it is cultivated in many warm parts of the world. P. dioica is traditionally used as a spice and condiment, flavoring agent as well as in tanning purposes.  Moreover, different plant parts have been used to relieve dental and muscle aches, bronchitis, menstrual cramps, flatulence, diabetes, viral infections, depression, arthritis and fatigue (Kikiuzaki et al., 1994). P. dioica is a precious source of different metabolites such as phenylpropanoids, galloylglucosides (Kikiuzaki et al., 1994; Marzouk et al., 2007), flavonoids and tannins (Marzouk et al., 2007).

The aim of this study is the evaluation of antimicrobial activity of the pure tannin compounds isolated from P. dioica leaves against S. aureus, and MRSA isolates as well as estimation of their effect on hemolysin production as one of the main virulence factors of S. aureus.

Tannins compound namely 4,6-(S)-hexahydroxydiphenoyl-(α/β)-D-glucopyranose, casuarinin, pedunculagin and nilocitin were isolated and identified from the leaves of P. dioica (Marzouk et al., 2007) (Figure 1). Samples were kindly provided by one of the authors (FAM) and authentic were kept in the Pharmacognosy and Pharmaceutical Chemistry Department, Faculty of Pharmacy, Taibah University.

The clinical isolates of S. aureus were collected from the Al-Madina Al-Munawarrah Hospitals and Taibah University. The isolates were purified from different  clinical sources; four  from wound, three from nasal swap, two from sputum, one from blood, one from tonsils and one from urine. Standard S. aureus (ATCC 29213) strains were kindly provided by the Ohod Hospital, Al-Madina Al-Munawarrah, Saudi Arabia. All isolates were confirmed according to the clinical laboratory standards (Cheesbrough, 1989).

All cultures of S. aureus were propagated using nutrient broth medium and incubated at 37°C for 24 hours. The harvested microorganisms were preserved in 10% glycerol stocks (Simione and Brown, 1991).

Determination of MIC of cloxacillin

The effect of tannin compounds on the tested S. aureus was evaluated using agar well diffusion method. Muller Hinton agar (20 mL) at 45°C was inoculated with 20 µL inoculums of each tested isolate diluted at 0.5 McFarland, mixed well and poured into sterile petri-dish and left till complete solidification. Wells of 10 mm were made in the plates using a cork borer. The wells were filled with 100 µL of the each compound 2 mg/mL for S. aureus isolates and with 5 mg/mL for MRSA isolates. Amoxicillin/clavulanic acid was used as a positive control. Antibacterial activity of the applied compounds was determined by measuring the diameter of the zone of inhibition around the wells (Devi et al., 2011).

Determination of MIC of tannins

The MIC of pedunculagin and nilocitin with the largest inhibition zone was performed. Amoxicillin/clavulanic acid was used also as positive control. MIC was measured using microtitre plate-dilution method against S. aureus and MRSA (CLSI, 2013). 2-fold serial dilutions of the tested compounds were performed in 100 μL nutrient broth to obtain concentrations from 1,000 to 4.7 µg/mL. The plates were incubated at 37°C for 24 hours. MIC was determined as the lowest concentration of compounds with no visible growth. Triphenyltetrazolium chloride (40 μL of 0.5%) (Sigma–Aldrich, USA) was added to each well to visualize the microbial growth by reducing the yellow dye to red color (Vogel et al., 2011).

The effect of the compounds on hemolysin released by S. aureus was determined by adding tannins in a sub-MIC concentration (1/2 MIC) to S. aureus cultures. The mixture was incubated at 37°C for 48 hours. The incubation of the tested isolate without compound was performed under the same conditions. The supernatants were centrifuged at 3,000 rpm for 20 min. The ability of S. aureus to produce hemolysin was examined using a technique (Dacheux et al., 2001). Sheep blood erythrocytes were washed three times in sterile physiological saline and centrifuge at 3,000 rpm for 5 min. The washed erythrocytes were resuspended in Tris buffered saline (50 mM Tris HCL and 150 mM NaCl, pH 7.4) with 2% final concentration. Mixture of erythrocytes suspension with supernatant was prepared (1:1 concentration) and incubated at 37°C for 2.5 hours. The suspension was centrifuged at 3,000 rpm for 5 min. The release of hemoglobin was evaluated by reading the absorbance at 540 nm. The incubation of RBCs in sterile Luria-Bertani containing 0.1% sodium dodecyl sulfate was used as a positive control (T), negative control (B) was prepared by incubating RBCs with equal volume of the Tris buffer. The percentage of cell lysis was calculated using the following formula:

where X is the absorbance value for the sample analyzed (Dacheux et al., 2001)

The MIC of cloxacillin against tested Staphylococcus isolates was determined. According to Clinical Laboratory Standard Institute, (CLSI, 2013), MRSA isolates were assigned at MICs >2 µg/mL. All the collected isolates had MIC<2 µg/mL except isolates 33, 56 and 724 which were categorized as MRSA with MIC >125 µg/mL.

Antimicrobial activity of tested compounds on the recovered isolates In the present study, the tested tannin compounds from P. dioica had an antimicrobial activity against all S. aureus clinical isolates and against MRSA (Tables III and IV). Similarly, Doss et al. (2009) observed that all tannin compounds isolated from leaves of Solanum trilobatum possess antibacterial activity against S. aureus at 2.5 mg/mL. Disintegration of bacterial colonies with tannin compounds may be attributed to their interference with the bacterial cell wall thus inhibiting the microbial growth (Akiyama et al., 2001; Caelli et al., 2000; Erasto et al., 2004). Viljoen et al. (2003) reported that tannins isolated from Punica granatum can be used as body wash or nasal ointments for MRSA.

In this research, it was also found that the presence of tannins with S. aureus decreased the ability of S. aureus to cause blood hemolysis. Choi and colleagues (2007) assumed that both condensed and hydrolysable tannins may form aggregates with α-toxin inhibiting its action on erythrocytes. The structure of tannins may be responsiple for their antimicrobial action. There are many mechanism underlining this activity. One  of which, tannins in pure or extract form have great ability to inactivate enzymes due to strong antioxidant activity, which could be explained mainly due to the presence of a large number of hydroxyl groups in a huge extended π-electron conjugation system in galloyl. Also, HHDP groups present in the tested compounds are responsible for the stabilization of phenoxide radicals and hence enhance its scavenging affinity in the oxidation reaction (Marzouk et al., 2007). Furthermore, the oxidized phenols cause enzymatic inactivation of the microorganism through reaction with sulfhydryl groups of the enzymes and form covalent linkage. One other point, antimicrobial potential of tannins could be through its effect on membrane via complex formation with the proteins and polysaccharides constituents of the cell membrane (Scalbert, 1991).

Pedunculagin and nilocitin exhibits antibacterial activity against S. aureus and MRSA. Moreover, they reduced the hemolytic activity of S. aureus. 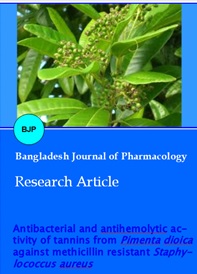