The methanolic extract of Alysicarpus vaginalis was selected for fractionation due to its known reported biological activity. The four fractions were separated and subjected for in vitro antimitotic and antiproliferative assays along with anti-cancer activity on two human cancers cell lines (SK-MEL-2 and Hep-G2). The antimicrobial potential of fractions had been evaluated against bacteria and fungi. From the all fractions, acetone and n-butanol fractions were effective against the cell lines. They show strong inhibitory action with mitotic index 6.2 and 8.4 mg/mL and IC50 values of antiproliferative assay in between 19.7 to 14.2 mg/mL respectively, which was found to be comparable to the standard methothrexate 5.9 mg/mL and 13.2 mg/mL respectively. In antimicrobial activity, the zone of inhibition had been observed in the range of 12-27 mm and MIC value was found in the range of 0.2-0.1 mg/mL. The acetone fraction was found to be most active against fungi, and E. coli whereas chloroform and n-butanol fractions were more effective against S. aureus and B. subtilis. The phytochemical characterization by HPLC analysis indicated the presence of important polyphenolic and steroidal compounds.

The searching of safe chemotherapeutic agent and healing powers in plants is an ancient idea. Plant metabolites have been applied toward in the treatment and/or prevention of cancer. Important progress has been made in cancer chemotherapy, a considerable portion of which can be attributed to plant-derived drugs (Conforti et al., 2008). The choice of clinical microbiologists to use plant extract as antimicrobial drug because these phytoconstituents will find their way into the arsenal of anti-infective agents prescribed by physicians; several are already being tested in humans. It is reported that, on average every year two or three antibiotics derived from microorganisms are launched (Clark, 1996). After a slowdown in that pace in recent years, again there has been an increase in the demand of plant-based substances or antibiotics as scientists realize that the effective life span of any antibiotic is limited (Hancock,  2005).

Thus, the initial attempts of discovering plant-based effective molecules have been found to be very helpful in reducing the toxic and unwanted effects of several agents because the prime benefits of using herbal medicines are that they are cheaper and relatively safer as compared to commercially available synthetic drugs (Sofowora, 1982).

Alysicarpus vaginalis (L.) DC belongs to the botanical family Fabaceae. Traditionally whole plant has been used for the treatment of cytotoxicity, renal calculi and sepsis (Ediriweera, 2007; Kirtikar and Basu, 1935). The leaf extract has been used for the improvement of eye sight and earache (Tirkey, 2006). The roots of this plant are generally employed as diuretic; in kidney disorders, skin related problems, leprosy and pulmonary troubles (Burkill, 1985).

From the literature review, it was observed that the plant was still scientifically less explored, so in the present study we have attempted to evaluate the plant on the basis of its chemical constituents and confirm its potential as a source of natural anti-infective and chemotherapeutic agents.

The aerial parts of A. vaginalis was collected in August-September, from the Aurangabad, Maharashtra, India. The plant was identified and authenticated at the Dr. Babasaheb Ambedkar Marathwada University, Aurangabad and plant specimen was submitted to the Botany Department of the University (Accession No. 0607). The crude material was dried in the shade for five days and then powdered with the help waring blender. In vitro anti-cancer activity has been tested by sulforhodamine B, SRB method (Skehan et al., 1990; Vanicha and Kanyawim, 2006). The cell lines were grown in RPMI 1640 medium containing 10% fetal bovine serum and 2 mM L-glutamine. For the present screening experiment, cells were inoculated into 96-well microtiter plates in 100 µL at plating densities which depended on the doubling time of individual cell lines. After cell inoculation, the microtiter plates were incubated at 37°C, 5% CO2, 95% air and 100% relative humidity for 24 hours prior to the addition of fractions.

Fraction samples were initially solubilized in dimethyl sulfoxide at 100 mg/mL and diluted to 1 mg/mL using water and stored frozen prior to use. At the time of drug addition, an aliquote of frozen concentrate (1 mg/mL) was thawed and diluted to get the required final concentrations i.e.10, 20, 40, and 80 μg/mL.

After compound addition, plates were incubated at standard conditions for 48 hours and assay was terminated by the addition of cold trichloroacetic acid (TCA). Cells were fixed in situ by the gentle addition of 50 µL of cold 30% (w/v) TCA (final concentration, 10% TCA) and incubated for 60 min at 4°C. The supernatant was discarded; the plates were washed five times with tap water and air dried. SRB solution (50 µL) at 0.4% (w/v) in 1% acetic acid was added to each of the wells, and plates were incubated for 20 min at room temperature. After staining, unbound dye was recovered and the residual dye was removed by washing five times with 1% acetic acid. The plates were air dried. Bound stain was subsequently eluted with 10 mM trizma base, and the absorbance was read on a plate reader at a wavelength of 540 nm with 690 nm reference wavelength. The activity results of sample were compared with the reference compound adriamycin.

The antimitotic activity had been evaluated by using Allium cepa root (Saboo et al., 2012). A. cepa bulbs were sprouted in water for 48 hours at room temperature. The bulbs with uniform root were selected for the study. These roots were dipped in the fraction (1 mg/mL) for 3 hours and distilled water was used for dilution as well as a blank. The methothrexate was used as a reference substance for study. After 3 hours, the root tips were fixed in the fixing solution of acetic acid and alcohol (1:3). The squash preparation was made stain by acetocarmine solution. The mitotic index was calculated by following formula:

For the antiproliferative assay, yeast Saccharocymes cerevisiae was used (Saboo et al., 2012). The yeast was inoculated with sterilized potato dextrose broth and incubated at 37°C for 24 hours and referred to as seeded broth. The seeded broth was diluted with sterilized distilled water, in order to get 25.4 x 104 cells (average). For the cell viability count, solution containing 2.5 mL of potato dextrose broth and 0.5 mL of yeast inoculums were prepared in four separate test tubes. In the first four tubes, 1 mL of fractions was mixed while in the fifth tube, standard methothrexate was added. The sixth tube was kept as control. All the tubes were incubated at 37°C. After incubation, 0.1% methylene blue dye was added in all tubes containing cell suspension and observed under microscope. In the microscope, viable cells were observed as non-stained, transparent with oval shape, while dead cells get stained and appeared blue in color. The average number of cells was counted in the hemocytometer.

The disk diffusion assay was carried out according to Bauer et al. (1966) for the evaluation of antibacterial activity. The fresh cultures of microbial strains were used for preparation of inoculums, which aseptically cultured at 37°C on Sabouraud 2% (w/v) glucose agar medium for 18 hours and for fungi Sabouraud dextrose agar for 48 hours with saline. The agar plates were prepared approximately 4-5 mm of depth. On the solid media plates, about 100 μL suspension of bacteria was spread and sterile disks of filter paper were impregnated with 50 μL (1 mg/mL) of the fraction and then placed on inoculated plates. These plates were incubated for 24 hours at 37°C and 48 hours at 30°C for bacteria and fungi respectively. For positive control, standard tetracycline disks for bacteria and standard ketaconozol disks for fungi, respectively, were used in the same concentration. The zone of inhibition in mm was measured by the antibiotic zone reader.

The antimicrobial activity of the fractions was determined in Muller–Hinton broth by 2-fold dilution method for the bacterial strains and RPMI 1640 for the yeast and mould (Bauer et al., 1966) and MICs were read in mg/mL after overnight incubation at 37°C. All experiments were made in triplicate.

HPLC is an important tool in qualitative analysis of the complex mixture or plant extracts.  The presence of important phytoconstituents in the sample was identified by using marker compounds (Sigma-Aldrich Chemie, Germany). Shimadzu HPLC system, a Luna C18 reverse-phase column (250 x 4.6 mm, i.d. particle size 5 µm) with LC-10AT, UV detector (Spectra System UV1000) was used. The analytical parameters such as mobile phase, wavelength, and flow rate for individual constituent have been given in Table I.

The phytochemical tests confirmed the presence of alkaloids, flavonoids, steroid, triterpenoids and phenolic substances in the different extracts of the plant (Table II). The methanol extract, out of four extracts had been selected for chemical identification, since the presence of various phenolics, flavonoids, steroids and other chemical compounds had been detected by qualitative phytochemical screening results.

It was found that out of the four fractions, acetone and n-butanol fractions have very strong cytotoxic effect and their GI50 value was very close to the  adriamycin (Table III).

A promising activity on cell lines was also supported by antimitotic and antiproliferative assays. Antimitotic study indicated the inhibition of meristamatic cell at different stages of cell cycle (Figure 2) while in antiproliferative study; there was an exponential decrease in the number of viable yeast cell numbers which indicates strong inhibitory effect of fraction on the cells. The mitotic index of fractions was found in the range of 6.2 to 13.2 mg/mL and IC50 value in antiproliferative assay was found to be 14.2 to 19.7 mg/mL for n-butanol and acetone fractions respectively. This had been found to be close to the standard drug, methothrexate. The other fractions had variable effects on the above activity (Table IV). The HPLC analysis of different fractions revealed the presence of steroidal compounds, olianolic acid, lupeol, β-sitosterol in chloroform fraction while presence of catechin and gallic acid was confirmed  in n-butanol and acetone fractions.

The results of in vitro cell line studies indicate that two fractions of extract acetone and n-butanol are very effective against both the cell lines. HPLC analysis identified and confirmed presence of phenolic compound, catechin and gallic acid. Polyphenolic compounds are well-known for causing anti-cancer effect by preventing initiation of the carcinogenic process and suppressing carcinogenicity in cells, also inhibiting cancer promotion and progression which is also supported by antimitotic and antiproliferative activities (Russo, 2007; Maurya et al., 2011). These supporting activities might give an insight about the mechanism of action and explain probable pathway of anti-cancer activity.

Further plant extract fractions were explored for their antimicrobial potential to confirm the traditional use of plant as an anti-infective agent (Rattanata et al., 2014; Silva et al., 2015). Previous report shows that A. vaginalis could have antibacterial properties (Narintorn et al., 2014). But our results are differed than the research study. All the fractions exhibited strong inhibitory action on different types of bacteria and fungi at very low concentrations of fractions. The effectiveness of these fractions might be due to the presence of identified steroid, phenolic, and flavonoid compounds (Arora and Kaur, 1999; Taylor et al., 2005).

The biological activity of A. vaginalis against the cancer and pathogenic microorganism along with identification of steroid, flavonoid and phenolic substance in the fractions is reported for the first time in this study. 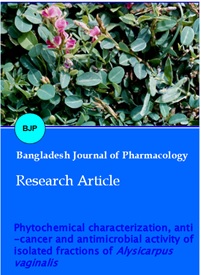