Among all types of cancers, colon cancer stands as the third most commonly diagnosed and second most cause of cancer-related deaths in the United States (Rebecca et al., 2014). Intake of fruits and vegetables is known to impart a reduction in the incidence of different types of cancers including colon cancer and ischemic heart diseases (Mathew et al., 2004; Fleischauer et al., 2003). Emphasis has now been shifted towards the screening of apoptotic inducers from natural sources particularly from plants in the form of extracts or as isolated compounds that specifically increase apoptotic cell death in cancerous cells.

Primula macrophylla D. Don. (Primulaceae) is an important member of genus Primula, which represent more than 400 species (Richards, 1993). P. macrophylla is a Himalayan species which is widely distributed from Afghanistan to China. The species flourishes best in moist rocky slopes near melting glaciers and wet meadows, at elevations ranging from 3,500-5,000 meters above sea level. P. macrophylla is a perennial clump-forming herb with compact heads of many flowers. The aqueous extract of P. macrophylla in the traditional system of medicine is used for the treatment of asthma. The plant is reported to have antispasmodic property and strong antiproliferative potential (Tsarong, 1994). The present study reports the antiproliferative and apoptotic effects of different extracts of P. macrophylla in human colon cancer cells (Colo-205).

P. macrophylla was collected at the peak stage of flowering in July 2015 from the Hangzhou City, Zhejiang Province, China. Fresh aerial parts of P. macrophylla were cleaned with distilled water, dried under shade for several days. After drying, the plant material was cut into small pieces and made into fine powder. The plant powder was packed in Soxhlet apparatus and extracted first with ethyl acetate and then with methanol at desirable temperatures. The extracts were then filtered through Whatman filter paper. The pellets were discarded and the supernatant was collected and concentrated under reduced pressure at required temperature using rotavapor. The extracts were dried, labeled as ethyl acetate extract and methanol extract and stored at 4°C until used for experimental analysis.

The Colo-205 cells were obtained from the American type culture collection (ATCC). Cells were cultured in RPMI-1640 medium complemented with 10% fetal calf serum, 100 μg/mL streptomycin and 100 U/mL penicillin. The Colo-205 cells were then grown in a CO2 incubator at 37°C in 5% CO2 with 98% relative humidity atmosphere.

To assess the effect of P. macrophyla leaf extract on Colo-205 cells, (3-(4, 5-dimethylthiazol-2-yl)2,5-dihenyl tetrazolium bromide) protocol was used as previously reported (Mosmann, 1983). Colo-205 cells (2 × 105 cells/ cells/mL) were grown in 96-well culture plates and incubated for 24 hours at 37°C and 5% CO2 level. After 24 hours of incubation, the supernatant was removed from the adhered cells and washed. Different concentrations (0-80 μg/mL) of plant extracts were added to respective labeled wells and incubated further for 48 hours. MTT solution (10 μL) was added to the cell culture and incubated for 2 hours. To dissolve the formazan crystals so formed, 100 μL of DMSO was used. Optical density was recorded on microplate reader (Bio-Rad Laboratories) at 570 nm. Production of formazon is proportional the number of viable cells. The percentage cell growth inhibition was calculated by the equation:

For the analysis of cell cycle phase distribution and apoptotic populations, flow cytometry was used (Fraker et al., 1995). Colo-205 were plated in 6-well culture plates at a cell density of 2 × l05 cells/mL and incubated for 24 hours at 37°C and 5% CO2 level. Cells were then treated with methanol extract of P. macrophylla at different concentrations (0, 10, 20, 40 and 80 µg/mL) in cell medium supplemented with 10% (v/v) FBS for 48 hours. After treatment, cells were harvested by centrifugation at 1,000 rpm for 5 min, washed with PBS, and then fixed with 70%  (v/v) ethanol (ice-cold) for 1 hour and then staining was done using cell cycle reagent (20 μg/mL propidium iodide, 0.1 mM EDTA, 10 µg/mL RNase (DNase free) and 1% triton X-100 prepared in PBS) for 30 min in dark. The contents were then analyzed by flow cytometry using FACScan flow cytometer (Becton Dikinson, USA) using Cell Quest software to measure the DNA content and cell cycle distribution phase. For each experiment, at least 10,000 cells were analyzed. The population of apoptotic cells with sub-G1 DNA content were calculated as a percentage of total number of cells.

In this experiment, the effects of P. macrophylla on mitochondrial transmembrane potential (ΛΨm) was assessed by employing Rh-123 as dye (Cao et al., 2007). Briefly, Colo-205 cells at a density of 2 × l05 cells/mL were seeded in 6-well culture plates and incubated with different concentrations (0, 10, 20, 40 and 80 µg/mL) of methanol extract of P. macrophylla for 48 hours. One hour before termination of the experiment, Rh-123 dye (10 μg/mL) was added and again incubated for 30 min at 37°C followed by washing with PBS. Upon centrifugation at 1,000 rpm for 5 min, pellets were collected, resuspended in PBS and immediately analyzed using FACScan flow cytometer (Becton Dikinson, USA) at an exciting wavelength of 488 nm. Cells without plant extract served as control. Population of apoptotic cells with low mitochondrial membrane potential (ΛΨm) were counted as a percentage of total number of cells.

Results from replicated experiments were depicted as mean ± standard deviation (SD). One-way ANOVA followed by Dunnett’s test was used and p value <0.05 was accepted as statistically significant. The concentration of the extract at which 50% of cell growth inhibition (IC50 value) was calculated from concentration inhibition curve.

One of the important characteristics of any anti-cancer drug is the inhibition of cell growth proliferation and apoptosis induction in cancer cells (Lowe and Lin, 2000). Methanol extract induced apoptosis in Colo-205 cells in concentration-dependent pattern (Figure 1). Treatment of Colo-205 cells with different concentrations of extract (0-80 μg/mL) significantly increased the side-scattering (SSC) profile due to increased cellular granularity because of chromatin fragmentation and significant decrease in forward-scattering (FSC) profile due to shrinkage of cells (Shan et al., 1998).

Figure 1: Effect of methanol extract of of P. macrophyla on dot-blot light scattering profile of Colo-205 cancer cells. Treatment of Colo-205 cells with different concentration of extract (0-80 μg/mL) significantly increased the side-scattering (SSC) profile due to increased cellular granularity because of chromatin fragmentation and significant decrease in forward-scattering (FSC) profile due to shrinkage of cells

The methanol extract of P. macrophylla induced significant increase in mitochondrial membrane potential (ΛΨm) loss in concentration-dependent manner. The loss of mmp (ΛΨm) increased from 6.4% in case of untreated control cells to 33.4, 54.0, 60.2 and 66.8% respectively at 10, 20, 40 and 80 μg/mL of the extract (Figure 3).

In the current study, the main aim was to explore the antitumor potential of different extracts of P. macrophylla namely methanol extract and ethyl acetate extract against Colo-205 human colon cancer cells. MTT is a soluble tetrazolium dye which is reduced in the mitochondria of glycotically active viable cells by NADPH-dependent dehydrogenases to insoluble purple formazon complex. The amount of formazon production is directly proportional to the number of viable cells (Mir et al., 2015). Treatment of Colo-205 with different concentrations of methanol and ethanol extract induced a significant decrease in cell proliferation in a concentration-dependent manner. P. macrophylla is known to have anti-cancer property (Quzi et al., 2009).

The cytotoxic activity of P. macrophylla is due to the presence of phenolic glycosides and saponins (Muller et al., 2006). A number of saponin compounds (macrophylloside, sistostrol, macrophyllicin, etc.) have been isolated from P. macrophylla. The cell cycle is the major indicator of antiproliferation effect in cancer cells. Mechanism of cell cycle regulation may be altered by anti-cancer drugs, which ultimately results in arresting of cells at different phases of cell cycle. This leads to inhibition of cell growth and proliferation of cancer cells (Shah and Schwartz, 2005).

Anti-cancer effects and induction of apoptosis in colo-205 cells have been shown by acetoxyroyleanone exhibits selective through the mediation of NF-κB and caspase-3 signalling pathways (Zhong et al., 2016). 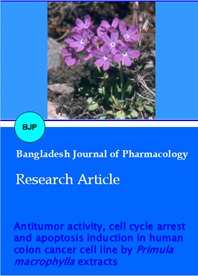