In this work, Taxithelium napalense ethanolic extract and its fractions were evaluated for the anti-diabetic activity in rat based on phytochemical and free radical scavenging properties. The ethanolic extract, fraction IV and V significantly attenuated the blood glucose levels at 600, 200 and 200 mg/kg with 50.0, 33.5 and 42.0% inhibition respectively. The histopathological studies were manifesting the recuperation of damaged cells in liver and pancreas tissues. The outcomes of the present work affirm that the T. napalense has a potency to plummet the overproduction of free radicals and blood glucose levels in the diabetic-induced rat.

Diabetes is a syndrome classified into a group of diseases evolved from several factors like oxidative stress conditions and defects in insulin action and secretion. Diabetes can damage the eyes, heart, kidneys and nerves (Nasri and Rafieian-Kopaei, 2014). Furthermore, earlier reports on diabetic patients strongly reveal the oxidative tissue damage due to high production of oxidants (Zitouni et al., 2005).

Recently, mosses were scrutinized for biological evaluations because of their nutritional contents (Decker and Reski, 2007). For instance, Sphagnum palustre moss has renoprotective effects (Kang et al., 2016) and aromatase inhibitory activity (Eom et al., 2016). There were a few literatures available on mosses because of their distinct habitat from other plants and also less existence. In this outlook, the contemporary study is focused on to spot out the biological parameters of the uncommon moss, Taxithelium napalense (Schwager) Broth.

T. napalense, (Family Sematophyllaceae) an epiphytic moss, lives on twigs and branches of other plants in semi-evergreen forests located in the palaeotropical region (Ramsay et al., 2002). There is no phytochemical or biological evaluation report available till now on this moss. As this grown on stress conditions like low fresh water and sunlight, we are forethought to find out the chemical variants, antioxidant and antihyperglycemic potentialities of T. napalense.

The entire moss, T. napalense was collected from Bhitarkanika Island (20° 72’ N latitude and 86° 87’ E Longitude) Orissa, India in March, 2016 on the barks of mangrove, Rhizophora species and was authenticated by Dr. Ankita Srivastava, National Botanical Research Institute (NBRI), Lucknow with an accession number (LWG-5/VB-Orissa-2016) had been deposited at the Bryophyte Herbarium, NBRI-Lucknow.

The air dried and powdered moss material was exhaustively extracted with ethanol and the extracted solvent was concentrated under reduced pressure gave a dried extract. Then the extract was used for column chromatography (Merck, #230-400, 500 g) using step gradient elution of hexane/ethyl acetate (95:5) to ethyl acetate (100%). The elution samples were divided into five fractions based on their thin layer chromatography observations (fraction I-V).

All the chemicals and reagents used for the present study were of analytical grade. Diagnostic kits were purchased from the Span Diagnostics Ltd (India). Alloxan monohydrate was from the Sigma Chemicals (USA) and glibenclamide from the Avantis Pharma Ltd.

The phytochemical analysis was carried out to ethanolic extract and fraction I-V of T. napalense using standard stratagems for identification of their chemical constituents (Trease and Evans, 2002).

The DPPH radical scavenging activity was deliberated as per method based on the measure of color absorbance of alcoholic DPPH solution (blue color) after addition of antioxidant solution (extract/compound). If antioxidants present in the test compound, a blue to yellow color change occurred due to reaction with DPPH (Rao et al., 2013).

Superoxide scavenging activity of the selected extract and its fractions were evaluated as per standard method-induction of superoxide free radical generation by riboflavin, the corresponding reduction by nitroblue tetrazolium and the absorption of light at 560 nm (Rao et al., 2013).

The percentage inhibition was measured by the following formula:

Healthy albino rats of either sex weighing between 180-250 g aged 60-90 days were employed for the study.

The toxicity of ethanolic extract and fraction I-V were performed as per OECD guidelines. The albino rats of single sex were selected into two batches consisting of six animals each. The animals were subjected to acute toxicity study using each extract and fraction I-V at a dose of 1,000 and 2,000 mg/kg orally in two batches at regular intervals of time i.e., 1, 2, 4, 8, 12 and 24 hours. During the time, the animals were under observation to different conditions like skin changes, morbidity, aggressiveness, oral secretions, sensitivity to sound and pain, respiratory movements and finally their mortality.

Induction of diabetes: Alloxan monohydrate (100 mg/kg) was administrated intraperitoneally for the induction of diabetes to rat after an overnight fasting (Monika and Aiman, 2012). Then, the animals were housed in a controlled facility and enabled to drink 5% glucose solution to overwhelm the hypoglycemia. The diabetic state was confirmed by the quantification of fasting blood glucose concentration using glucometer with blood collected by tail vein puncture after 72 hours. Rats with blood glucose ≥200 mg/dL after 72 hours were perpetuated for succeeding four days and contemplated diabetic and used for further study.

The blood glucose levels were scrutinized on fasting, day 1, day 3, day 5 and day 7. The effect of test samples on body weight of animals also monitored on these days. On day 7, blood samples were collected from the animals by puncturing of retro-orbital plexus under anesthesia (diethyl ether). These blood samples used for the estimation of plasma total cholesterol (TC), triglyceride (TG), high density lipoprotein (HDL), and low density lipoprotein (LDL) using Randox diagnostic kits (Assmann et al., 1983). The absorbance was determined and calculated using fully smart semi-automated analyzer and finally, animals were sacrificed. The kidneys, pancreas and liver were detached for measurement of lipid peroxidation (TBARS) and histopathological studies.

The isolated liver and kidneys were removed without delay and washed using 0.9% NaCl. The tissues were homogenized using homogenizer containing 4.5 mL of 0.25 M sucrose. Then, cytosolic fraction was separated by centrifugation, first at 1000 × g for 10 min and then at 2000 × g for 30 min at 4°C.  The homogenate (0.2 mL) was mixed with 0.2 mL of 8.1% (w/v) sodium dodecyl sulfate solution, 1.5 mL of 20% acetic acid solution of pH 3.5 and 1.5 mL of 0.8% (w/v) of thiobarbituric acid in a vial and the final volume was made up to 4.0 mL with distilled water. Then vials were heated in boiling water bath for 60 min. Then, cooled the samples to room temperature and added equal volumes of tissue blank or test sample and 10% trichloroacetic acid were placed into a centrifuge tube. It was centrifuged at 1000 × g for 10 min and the supernatant fraction was separated and measured the absorbance using spectrophotometer at 532 nm (Ohkawa et al., 1979).

The separated liver and pancreas were used for histopathological studies by preparing 2 mm sections using microtome. They were fixed in 10% formalin solution and stained with hematoxylen and eosin.

The values were given in mean ± SEM. Statistical differences in extract, fractions and control groups were compared by two-way ANOVA and followed by Dunnet's test. The p value <0.05 were considered statistically significant.

The phytochemical analysis of the ethanolic extract and fraction I-V revealed different phytochemical constituents (Table I). The extract manifested the presence of steroids, saponins, carbohydrates, flavonoids, tannins, glycosides, phenolics but it gave negative results for alkaloids.

Table I: Phytochemical analysis of ethanolic extract and its fractions of T. napalense

As per OECD guidelines, the toxicity studies of the ethanolic extract and its fractions showed no mortality in rats. They were in normal conditions at tested concentrations (1,000 and 2,000 mg/kg). Hence, the tested extract was considered as safe and nontoxic. Further study was carried with 300 and 600 mg/kg body weight for anti-diabetic activity.

The body weight of the rats in distinct groups was also observed during the study. The untreated diabetic rat lost the body weight gradually when compared to the normal (Group II-V), ethanolic extract, fraction IV-V (Groups VIII-XI) animals. The animal groups dosed with ethanolic extract (600 mg/kg) gained more weight when compared to other groups.

The ethanolic extract and fractions IV-V had significantly stabilized the varied total cholesterol, triglyceride, HDL and LDL contents because of alloxan-diabetes (Table IV).

The liver and pancreatic tissues appeared normally in ethanol extract- and fraction V-treated group animals as control group animals (Figure 1). The hepatocytes showed normal structure. Gentle to modest portal inflammation were noted in lymphomononuclear and plasma cells of tested samples compared to normal rats, but it was less compared to the liver toxic animals. Sinusoids, hepatocytes and portal region appear ordinary in animals treated with glibenclamide compared to other groups. The pancreas structure of the diabetic rats was restored its structure by treating with T. napalense ethanolic extract and fraction V by reducing the swelling (increase in cell size), nucleomegaly (increase in the size of nuclei) and cytoplasmic vacuolations and eosinophils. The phytochemical analysis of T. napalense ethanolic extract and its fractions showed the presence of different phytochemical constituents but, the fractions showed dissimilarities in presence of phytoconstituents. The fractions IV and V chiefly contain bioactive compounds like flavanoids, tannins, glycosides and saponins. The extract and fractions were analyzed for their free radicals scavenging activity on superoxide and DPPH free radicals and they show signs of significant reduction in free radicals production. The ethanol extract and its main fractions IV and V were evaluated for their anti-diabetic activity and they showed good anti-diabetic activity on alloxan-induced diabetes.

The T. napalense exhibited significant reduction of free radicals and they do not have hyperglycemia or hypoglycemia in normal rats and manifested good anti-diabetic activity. As diabetes mainly intensifies the oxidative stress and drops the antioxidants capacity of cells (Hays et al., 2008), likewise in alloxan-diabetes also foster equivalent effects, which was observed in the contemporary study i.e. the fluctuations in blood glucose levels, body weights, TC, TG, HDL, LDL contents in plasma and TBARS content in kidneys and liver. The weight loss was also observed in diabetic induced rats, this is due to excessive breakdown of the tissue proteins and lipids for the energy to maintain organs function. In addition, gentle to modest portal inflammation were noted in lymphomononuclear and plasma cells in the liver and swelling (increase in cell size), nucleomegaly (increase in size of nuclei) and cytoplasmic vacuolations and eosinophil sin pancreas was observed in the diabetic rats (Group II). The abnormalities of liver and pancreas were may be due to the over production of free radicals because of diabetic induction in the animals (Scofield et al., 1985; Pohl and Junge, 1997). But, after medication with the ethanolic extract and its fractions IV and V, the animals started to procure their body weight and the fluctuations in lipid profile (TC, TG, HDL and LDL) were restored to their normal levels compared to diabetic animals (non-treated group). The liver and pancreatic tissues were appeared normal i.e. the hepatocytes are appear normal in normal structure, Sinusoids, hepatocytes and portal region appear ordinary and pancreas was with reduced swelling and nucleomegaly. The phytochemical analysis revealed presence of the tannins and glycosides and fraction V displayed better activity when compared to fraction IV, but less active than ethanolic extract. The anti-diabetic and antioxidant activities of T. napalense may be due to the presence of these constituents and more ever, flavanoids, tannins, saponins have been reported to exert different biological activities (Tapas et al., 2008; Elekofehinti et al., 2012; José et al., 2009). The variation in the activity of ethanolic extract and its fractions may be due to the indiviual constituents present in them, while the crude extract have more activity was may be due to their synergetic effect.

The discerned free radical scavenging and antidiabetic activities of T. napalense are due to the existence of major constituents like tannins, glycosides, flavonoids and saponins.

All the procedures followed as per OECD guidelines and regulations of Institutional Ethical Committee (Regd No. 516/01/A/CPCSEA).

The authors are thankful to Dr. Ankita Srivastava for determination, morphoanatomical of collected stressed moss specimens and preserving the study materials at Bryophyte Herbarium, CSIR-NBRI, LWG, India, to the authorities of AU College of Pharmaceutical Sciences, Andhra University for providing the necessary facilities to successfully complete the research. 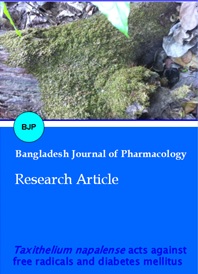