In the present study, aerial parts of Nepeta cilicica were hydro-distilled for the essential oil. Furthermore, air-dried plant materials were extracted with methanol. According to GC-MS results, 35 compounds were characterized in the oil (totally 92%). Caryophyllene oxide, β-caryophyllene and spathulenol (28.2, 8.9 and 4.2%) were found as main components of the oil. Sixteen compounds were detected by LC/MS, most of which were caffeoylquinic acid, luteolin and apigenin derivatives, in methanolic extract of the N. cilicica. Apart from DPPH radical scavenging activity, inhibitory effects on bacterial and yeast growth of essential oil and the methanolic extract were evaluated. Twenty-four different pathogenic bacterial and Candida strains were tested by M7-A7 and CLSI M27-A2 protocols respectively. The crude extract showed better inhibitory effects against bacteria strains than the essential oil. Both oil and the extract demonstrated strong inhibition on C. tropicalis at a concentration of 47.0 µg/mL (MIC).

Biological efficacy is usually attributed to isoprene derivatives named nepetalactones especially found in the Nepeta oils (Kökdil et al., 1999; Başer et al., 2000; Skaltza et al., 2000; Nestorović et al., 2010). Even though two studies have been reported on the chemical composition of N. cilicica essential oil. There has not been any report about the chemical composition of the crude extract and antimicrobial activity of essential oil or the extract. According to previous studies sesquiterpenes (β-caryophyllene, spathulenol and β-caryophyllene oxide) and fatty acids have been determined as main compounds of N. cilicica essential oil (Formisano et al., 2013; Kokdil et al., 1997).

In the present study, hydrodistilled essential oil and crude methanolic extracts of flowering aerial parts of N. cilicica were analyzed by chromatospectral techniques. GC-MS with GC-FID and LC-MS systems were used for the determination of essential oil and the extract composition respectively. Both oil and extract were subjected to antimicrobial susceptibility assay against 24 pathogenic bacteria and Candida strains in comparison with the standard antimicrobial agents and also antioxidant assay for the first time.

The flowering aerial parts were air-dried at ambient temperature then subjected to a Clevenger-type apparatus for hydrodistillation for 3 hours according to European Pharmacopoeia 8.0, with a yield of 0.02% (on dried weight basis). The oil was dehydrated over sodium sulfate anhydrous and kept at 4°C until analysis.

Preparation of the extract

Extract of air-dried and grounded plant materials were prepared by the methanol (Merck) in an orbital shaker for 24 hours. After evaporation process at 40°C, dried extract was kept in dark place at 4°C until analysis.

Identification of the compounds

Characterization and identification of the N. cilicica essential oil components were fulfilled by comparison of their relative retention time with those of genuine samples or by comparison of their relative retention indices (RRI) to n-alkanes (C6-C16). Software matching against commercial libraries (Wiley GC-MS and Mass Finder 3) (Koenig et al., 2004; McLafferty and Stauffer, 1989) and in-house “Başer Library of Essential Oil Constituents” created by genuine compounds and several constituents of the common essential oils, as well as MS data from previous works (ESO, 2000; Joulain and Koenig, 1998) were used for the identification.

The 1,1-diphenyl-2-picrylhydrazyl (DPPH•) scavenging activity determined according to the  previous study of Kumarasamy et al. (2007). Serial dilutions of the stock solution of samples and stand arts were prepared as half concentrations of previous one. Equal amounts of DPPH• reactive were added to the diluted solutions. After 30 min UV absorbance was recorded at 517 nm.

Antibacterial and anticandidal properties of the essential oil and methanol extract were evaluated by using partially modified CLSI microdilution broth methods (CLSI-M7-A7 and CLSI-M27-A2). Unlike the reference methods, the essential oil and methanolic extract were diluted between the concentrations of 5.8 to 6000 µg/mL. Ampicillin (Merck), chloramphenicol (Merck), amphotericin B (Sigma-Aldrich) and ketoconazol (Sigma-Aldrich) were used as standard antimicrobial agents. Microorganisms were obtained from ATCC, NRRL and RSSK (Refik Saydam National Type Culture Collection, Turkey).

According to GC/MS results, 35 compounds representing 92% of the essential oil were characterized. The oil was constituted mainly by oxygenated sesquiterpenes (47.5%), sesquiterpene hydrocarbons (25.3%), alkanes (10.2%), oxygenated monoterpenes (3.7%), acycylic-diterpene derivative phytol (2.9%) and fatty acids (2.3%). Caryophyllene oxide (28.2%) and β-caryophyllene (8.9%) were determined as main compounds. Monoterpenes were detected only trace amounts in the essential oil (Table I).

Table I: Composition of the essential oil of N. cilicia According to antimicrobial assay results essential oil and methanol extract showed weak to strong antimicrobial effects against 24 different pathogenic Candida and Gram positive and negative bacterial strains. The essential oil demonstrated strong activity against food pathogens Gram positive Bacillus subtilis and Listeria monocytogenes at the concentrations of 94 and 187 µg/mL (MIC) respectively (Table III). The strain of ATCC-750 C. tropicalis was inhibited by the essential oil having a MIC value of 47 µg/mL. The essential oil demonstrated moderate to weak inhibitory effects against all other tested pathogens between the concentrations of 3,000 to 375 µg/mL (MIC).

Essential oil composition of the Nepeta species has been varying according to the growing region, environmental conditions and soil type, which they are generally divided into two groups nepetalactone containing and nepetalactoneless as reported in literature data. Apart from mono- and sesquiterpenes in essential oils, diterpenes, triterpenes, iridoids and their glucosides, were reported as major constituents of Nepeta species (Asgarpanah et al., 2014; Formisano et al., 2013; Sharma and Cannoo 2013; Başer, 2000; Skaltza et al., 2000).

In accordance with our results, sesquiterpenes were the major compounds (73%) of N. cilicica oil.  According to a few previous works on N. cilica essential oil, sesquiterpenes such as spathulenol (15.1%), hexadecanoic acid (14%) and γ-cadinene (5.5%) were found as main compounds (Formisano et al., 2013). In the other study β-caryophyllene oxide (41%), β-caryophyllene (15.7%) and α-copaene (2.7%) were reported as main components of the N. cilicica essential oil similar to our results (Kökdil et al., 1999).

The study mainly focused on the bioactivity of the essential oil and total methanolic extract of N. cilicica used as food as well as medicine. Sesquiterpenes were found as major compounds of the essential oil where the caffeoylquinic acid, luteolin and apigenin derivatives were found in the extract. The essential oil showed strong inhibitory effects especially against food pathogen bacteria B. subtilis and Listeria monocytogenes. The total extract has stronger activity against all tested bacteria species. With the remarkable antimicrobial properties and phenolic content, N. cilicica total extract may be considered as a potential food preservation additive after further analysis. 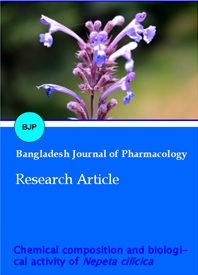