Anti-snake venom therapy is the only treatment for snake bite but leads to acute and chronic conditions which may be severe. The medicinal plants have gained importance over years to find an effective alternative to anti-snake venom. The present study focused on evaluating the potential of Clerodendrum serratum for the anti-snake venom activity. Phytochemicals were extracted from the C. serratum with different solvents. The ethyl acetate and methanolic extracts were found to neutralize the major enzyme toxins (phospholipase A2, protease and hyaluronidase) of Bungarus caeruleus and Daboia russelii venom at a concentration of 100 µg/mL. The fibrinogenolytic activity of both the venoms were neutralized. The study proves that the plant C. serratum possesses certain compounds which inhibit the toxins present in the venom of B. caeruleus and D. russelii.

Around 3,000 species of snakes are identified so far, of which only 13-14% are found to be potentially dangerous to humans. Indian cobra (Naja naja), common krait (Bungarus caeruleus), Russell’s viper (Daboia russelii) and saw-scaled viper (Echis carinatus) are considered responsible for snake bite deaths in India (Mukharjee, 2012).

Presently, anti-snake venom obtained from the sera of horse is the only available treatment and has variouslimitations like cost, storage facility, anaphylactic reactions and serum sickness.

Snake venom neutralization studies was performed in genus Clerdendrum (C. viscosum) against Naja naja venom and was found to be effective which justifies the traditional  use of Clerodendrum viscosum against snake bite (Richard et al., 2006). In the present study, attempt was made to evaluate the potential of C. serratum, for its ability to neutralize the venom of B. caeruleus and D. russelii, two medically important snakes of India by in vitro and pharmacological methods.

Lyophilized venoms of B. caeruleus and D. russelii were obtained from Irula Snake Catcher’s Cooperative Society, Kancheepuram, Chennai. Venom of known concentration was dissolved in physiological saline and centrifuged at 2000 x g for 10 min. Supernatant was used for further analysis and stored at 4°C. Protein content was estimated according to the method of Lowry et al., (1951).

Leaves of C. serratum was collected from sanjeevani vatika, Department of Horticulture, GKVK, Bangalore, Karnataka and was authenticated (Authentication no 44) by Dr. M. Vasundhara, at GKVK.

Leaves were thoroughly washed, shade dried, ground into fine powder and sieved to get uniform particle size. Powdered material was then subjected to continuous hot extraction (60-80°C) in soxhlet apparatus using solvents such as petroleum ether, chloroform, ethyl acetate and methanol. The extraction was carried out until the loop in the siphon tube was colourless. The extract obtained was concentrated using rotary vacuum evaporator [model: Biobase RE 100-pro] and dried at 40°C. The residue obtained was expressed as in terms of dry weight (g), which was used for further analysis.

The qualitative phytochemical analysis of the extracts was performed as per the method described by Kemp, (1986) and Sazada et al., (2009), to detect the presence of different phytoconstituents such as alkaloids, terpenoids, flavonoids, phenols, saponins, carbohydrates and other metabolites.

For the inhibition studies, the venom was pre-incubated with the extracts for 30 min at 37°C and the assays was performed accordingly in triplicates.

Hyaluronidase assay was determined turbidometrically (Pukrittayakamee et al., 1988). The assay mixture contained Tris-HCl buffer (pH 8.0), 50 μg hyaluronic acid (in buffer) and enzyme in a final volume of 1.0 mL. The mixture was incubated for 15 min at 37°C, the reaction was stopped by the addition of 2 mL of 2.5% (w/v) cetyltrimethylammonium bromide in 2% (w/v) sodium hydroxide, and absorbance was read at 400 nm (within 10 min). Blank contained 1 mL of same buffer and 2 mL of 2.5% (w/v) cetyltrimethylammonium bromide in 2% (w/v) sodium hydroxide. Turbidity-reducing activity was expressed as percentage of the remaining hyaluronic acid, taking the absorbance of a tube in which, no enzyme was added as 100%. One unit was defined as the amount of enzyme causing 50% turbidity reduction as 1.0 unit of international standard preparation. Specific activity is turbidity-reducing units per mg of protein per min. Inhibition studies was performed as mentioned earlier.

Phospholipase A2 activity was measured by the method of Marinetti (1965), with suitable modifications. Briefly, egg yolk was suspended in Tris–HCl buffer pH 8.0 and adjusted to an initial absorbance of 1.0 at 740 nm, venom sample (10 µL of 0.1%) was added to 5 mL of this suspension and the readings were recorded. Phospholipase activity was assessed as decrease in optical density over an incubation period of 1 min. One unit of phospholipase activity corresponds to the decrease of 0.001 absorbance per min. Activity was expressed as U/mg of venom. Inhibition studies was performed as mentioned earlier.

Reaction mixture for protease assay was composed of 0.5% casein, 1.0 mL Tris- HCl buffer (pH 8.0), and 0.5 mL 0.25% crude venom. The reaction mixture was incubated for 4 hours at 37°C. At the end of 4 hours, the reaction was topped by adding 4.0 mL of trichloroacetic acid (TCA) and mixture was filtered using Whattman No. 1 filter paper (Greenberg, 1955); and 1.0 mL of the filtrate was used for protein estimation using L-tyrosine as a standard (Lowry et al., 1951). In the above investigation, one unit of enzyme activity was defined as that which liberated 0.02 μmole tyrosine/hour under the experimental conditions described.

Fibrinogenolytic activity of venom was assayed as per the method described by Ouyang and Teng (1976). Reaction mixture composed of venom and Bovine fibrinogen (50 μg), incubated for 1 hour at 37°C. Reaction was terminated by the addition of 20 μL denaturing buffer (1M urea, 4% SDS and 4% β-mercaptoethanol). The hydrolysed product was analysed with 12% SDS and stained with Coomassie brilliant blue for visualizing the protein band. Venom to plant extract of 1:10 concentration was pre-incubated for 30 min at 37°C for inhibition studies.

Extracts obtained from soxhlet extraction were dried using rotary vacuum evaporator and the weight was expressed in terms of dry weight (w/w) where the yield per 100 g was as follows: Petroleum ether 0.16 g, chloroform 0.31 g, ethyl acetate 0.21 g and methanol 1.04 g. Enzyme inhibition studies was performed in triplicates for all the extracts.

The qualitative analysis of phytochemicals revealed the presence of alkaloids and flavonoids in chloroform extract, tannins, steroids, flavonoids and glycosides in ethyl acetate extract and saponins in methanolic extract. Phenols, resins and proteins were absent in the extracts.

Table I: Activity of B. Caeruleus and D. russelii venom on enzymes

The genus Clerodendrum has found to contain flavonoids as the predominant phytochemicals (Sinha et al., 1981), along with neo-clerodane diterpenes (Pandey et al., 2005), triterpenes, often phenolic compounds (Ganapaty and Rao, 1985) has also been reported, with some species showing the presence of macrocyclic alkaloids (Lumbu and Hootele, 1993) and cyanogenic glycosides (Miller et al., 2006), this is in agreement with the phytochemicals observed in the present study, absence of phenols may be due to phytochemical variation exhibited by the plants depending on it environmental conditions.

The potential of therapeutic properties evaluated for C. serratum has been credited for presence of phytochemicals like flavonoids, phenolics and saponins in the drug (Patel et al, 2014). It is interesting to note that in the present study the plant extract that showed inhibitions in ethyl acetate and methanol extract has the presence of those phytochemicals which has been shown to possess therapeutic properties in the previous studies.

In the present study, inhibition was performed on three enzymes of snake venom namely PLA2, protease and hyaluronidase, also known as major enzyme toxins (METs) which if inhibited will be efficient in neutralizing the toxic effects of snake venom, although all extracts of C. serratum has shown inhibitions, on krait venom, the plant extracts were not able to efficiently inhibit D. russelii venom enzymes. This differential inhibition may be due to the structural differences exhibited by the venom belonging to two different classes, elapid and viperid. In a study reported by Mukherjee et al. (2008) a compound isolated from methanolic leaf extracts of Azadirachta indica exhibited significantly higher inhibition on Naja naja venom than on D. russelii. Hyaluronidase was found to be completely neutralized by ethyl acetate and methanolic extract of plant at a concentration of 100 μg/mL for both the venoms, hyaluronidase also known as spreading factor which helps in facilitating the easy diffusion of toxins, thus aiding the fast action of venom components. Inhibition of hyaluronidase facilitates in increasing the survival time by slowing the spreading of toxic components (Girish et al., 2004).

D. russelii and B. caeruleus venom possess several proteases that can lyse several important proteins, thus are said to be responsible for local and systemic effects of envenoming, extracts were able to inhibit the protease of krait venom up to 40% at 100 μg/mL concentration whereas, there was no inhibitions observed for D. russelii venom. Further increasing the dose of the plant extract may help in evaluating the neutralization potency of the plant extracts. However, ethyl acetate and methanol extract of the plant was able to completely neutralize the fibrinogenolytic activity exhibited by both the venoms indicating its potency to neutralize snake venom serine protease.

It is interesting to note that many plant species belonging to Lamiaceae family has been reported to possess the ability to neutralize the venom components, both asper the literature, as well as through scientific studies for few plant species. For eg, Aqueous extract of Ocimum scantum has been found to inhibit coagulation, fibrinolytic and PLA2 activity of Naja naja venom at a concentration of 18 µg, 0.5 mg and 9 µg respectively (Kuriakose et al., 2012). In another study, Rosmarinus officinalis extract belonging to the same family has shown to completely inhibit the hyaluronidase activity of Egyptian desert horned viper cerastes cerastes (Wabhy et al., 2012). The study by Salama et al. (2017) has confirmed the efficiency of this plant both in vitro and in vivo proving its efficiency to treat lethal viper bites. Methanolic extracts of Leucus asper has shown to possess significant inhibitory effect on cobra venom (Kadiyala et al., 2014). Thus, plants belonging to lamiaceae has shown significant inhibitory effects on elapid and viper venoms, which shows that promising phytochemicals having snake venom antidote can be obtained.

The ethyl acetate and methanolic extracts of C. serratum has shown inhibitions on the venom enzymes in vitro, proving that the plant possesses the ability to neutralize the venom of D. russelii and B. caeruleus.

Authors would like to thank Ms. B. C. Spoorthi, Dr. Vineetha and Bhavya for help in video recording of the experiment.

Mukharjee AK. Green medicine as a harmonizing tool to antivenom therapy for the clinical management of snake-bite: The road ahead. Indian J Med Res. 2012; 136: 10-12. 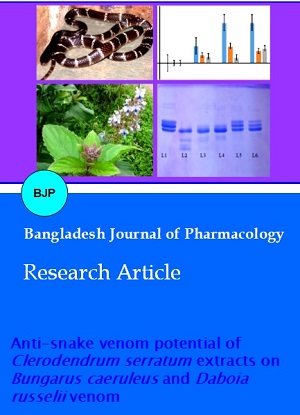