Triglycerides are esterified products of glycerol with fatty acids. They are the main constituents in human, animals and plants as the form of oil, fats and lipids (Nelson and Cox, 2000). In body, liver cell synthesizes certain triglycerides and store the fatty acid as the source of energy (White and Venkatesh, 2011). They are also used as lubricants, emulsifiers and plasticizers in cosmetic, food, chemical and pharmaceutical industry (Macierzanka and Szelag, 2004).  In literature, many synthetic methods for synthesis of triglycerides have been reported in which, the first step is the conversion of fatty acid into fatty chloride by using thionyl chloride, oxalyl chloride, phosphate pentachloride (Quinn et al., 1967) (Mattson and Volpenhe, 1962). These inorganic acids are not environment friendly method. Another approach toward the synthesis of triglyceride involves the use of certain enzymes as free CALB (Ravelo et al., 2015; Ferreira and Tonetto, 2017), and catalysts as zinc carboxylates (Macierzanka and Szelag, 2004), triphenylphosphine dibromide (Saroja and Kaimal, 1986) which are very expensive. In this research work, synthesis of new triglyceride with benzoic acid derivatives rather than fatty acid has been reported through, an environmental friendly and inexpensive, acyl addition elimination reaction by using CDI reported by Sheikh et al. (2018).

In the current study, we synthesized four new triaryl triglycerides (3a-3d) with benzoic acid and evaluated their urease inhibitory and antimicrobial activities which were found to be comparable to previously reported monoglyceride analogs (Sheikh et al., 2018).

Solvents and reagents that were used in the synthesis were of analytical grade and purchased from the Sigma-Aldrich Chemical Company, USA and Merck Millipore. Jasco-320-A spectrophotometer was used for the IR spectroscopy by using KBr discs in the range of 400-4000 cm-1. 1H-NMR and 13C-NMR spectra were recorded in the solvent CDCl3 and DMSO with Si(Me)4 as the internal standard at 300 on Bruker Avance AM spectrometers. 1H-NMR, 13C-NMR, IR, elemental analysis and EI-MS were done in International Center for Chemical and Biological Sciences, University of Karachi, Karachi, Pakistan. For all compounds, mass spectroscopic analysis data were collected through EI-MS using JEOL USA JMS600S instrument.

The mass spectra were taken under electron impact (EI) on MAT 312 and MAT 113D mass spectrometers. Thin layer chromatography technique was used to monitor the reactions and purity, carried out on Merck pre-coated silica gel 60 F254 20 x 20 cm aluminum sheets and spots were seen under UV light at 254 and 366 nm.

Organic acid (1a-1d) (5 mmol) and carbonyldiimidazole (5 mmol) were dissolved in THF (30 mL). After 2 hours of stirring, the glycerol (5) (1.25 mmol) was added into the vessel along with triethylamine base (0.52 mL). The reaction mixture was left stirring for 48 hours after which the solvent was dried off. The solid reaction mixture was poured into 0.05 M solution of Na2CO3. Obtained precipitate of the product was filtered, washed again with water, extracted with dichloromethane and was dried over sodium sulfate. Evaporation of solvent gave the triaryl triglyceride ester (3a-3d) which was further purified through column chromatography (Scheme 1).

A mixture of 25 μL of enzyme (jack bean urease) and 100 mm urea containing 55 μL of buffer was incubated with 5 μL of compound (3a-3d) which concentration was 1 mM. Incubation process was carried out at 30°C for 15 min in 96-well plates. Indophenol method is described in the literature (Weatherburn, 1967), in which the activity was measured through the NH3 production. In brief, 45 μL each of 1% w/v phenol and 0.005% w/v sodium nitroprusside (phenol reagent) and 70 μL of 0.5% w/v NaOH and 0.1 % active chloride NaOCl (alkali reagent) were added to each well. The increasing absorbance at 630 nm was measured after 50 min, using a microplate reader (molecular device, USA). All the assays were performed at pH 8.2 (0.01 m K2HPO4.3H2O, 1 mm EDTA and 0.01 m LiCl2). Percentage inhibition was calculated from the formula given as follows:

Thiourea was used as the standard inhibitor of urease.

The agar well diffusion method was used to determine the antibacterial activity by plant extract and its fractions (Ahmed et al., 1998). In this procedure, 100 μL of inoculums (diluted to 106 CFU/mL) of test culture was mixed with 20 mL of molten sterile tryptic soya agar. This mixture was poured into pre-sterilized petri dishes under sterile condition. Plates were allowed to set at 4ºC for 30-40 min. Holes (6 mm diameter) were made in the center of each seeded plate. 0.1 mL of the test solution i.e. compound (3a-3d) was then filled in holes with two concentrations (0.1 and 0.05%). Standard disc of antibiotic gentamicin (10 μg) served as positive antibacterial control. DMSO was used as negative control. All plates were then incubated at 37 ± 1ºC for 24 hours. The zone of inhibition around the wall was observed for the evaluation of the antibacterial activity. Vernier caliper was used to measure the diameter (in mm) of inhibition zone. Readings were made repeatedly to minimize test error.

All synthetic compounds (3a-3d) were evaluated for their antimicrobial activity against Gram positive (S. pneumoniae, S. epidermidis and Bacillus pumilus), Gram negative (Escherichia coli and Pseudomonas aeruginosa) and yeast (Candida albican). In the current study, gentamycin (10 μg) was used as standard while synthetic compounds (3a-3d) were used in two concentrations 0.1 and 0.05%. The antimicrobial activity results are listed in Table II.

In the synthesis of triaryl triglyceride (3a-3d), glycerol was esterified with only once with one benzoic acid. The esterification was carried out by CDI which incorporated the imidazole as leaving group in place of basic group –OH. Being an aromatic ring, the imidazole anion is highly stable (closed bonding shell and resonance) (Verma et al., 2012), hence elimination step of acyl addition elimination reaction becomes energetically facile. Acyl addition elimination is facilitated by the same scheme of the replacement of the leaving group usually by reaction of the acid with an inorganic acid such as SOCl2, oxalyl chloride, PCl3 and PCl5 (Roy et al. 2016). Glycerol being a triol polyhydric alcohol (Bieleski, 1982) wields three Lewis basic OH sites for bonding with bioactive moieties, in this research work these OH sites bonds with C=O of three benzoic acids. Other than glycerol, higher polyol sugar alcohols can also be used on the same pattern with even higher number of Lewis basic sites in them to be bonded with aryl rings.

Some bonded benzoic acid rings had activating and deactivating (resonating and inductive) groups on the aryl ring inducing an overall electron rich or deficient character on the bonded aryl ring respectively. Hence, substitution on the aryl ring had an impact on the bioactivity and also on the interaction with substrates.

The 1H-NMR of all compounds were studied at 300 MHz. In 1H-NMR of (3a), alkyl protons of C1, C2 and C3 appeared between 4 to 5 ppm, due to the deshielding effects of sp2 O atom which is in conjugation with the C=O bond of the ester. Aryl protons are deshielded by sp2 carbonyl carbon of ester, appearing between 7 to 8 ppm.

Because of the presence of the symmetry element in (3a-3d) half of the resonance spectra were achieved. All aryl ring proton showed 2nd order coupling with AA’BB’C system. This system referred to as Pople notation spin spitting designation protocol (Pople et al., 1957), otherwise in 1st order spectra of aryl ring spin splitting system would at least doublet of doublet (dd) with 3J and 4J. Similarly, the beta carbon (C2) proton should have been doublet of doublet (dd) but there was also 2nd order interaction between the mutually spin splitting protons in the alkyl aliphatic range. The higher vicinal coupling constant means (sp3-1s) σ orbital is parallel to the 1s σ orbital, this implies that the orbital-orbital overlap is strong according to Dirac modal and electronic spin interaction is facile (Minch, 1994). This orbital overlap is possible when angle is either 0º or 180º. In case of 180º the interaction is in between σ and σ* orbital. The alkyl aliphatic system is deshielded by the sp2 O which is in conjugation with the C=O bond of ester. Aryl section is deshielded by sp2 carbonyl carbon of ester group. Whether the symmetry was axial or planer can be verified by the stereochemical analysis such as NOE, NOESY.

Limited structural activity relationship showed that compound (3c) was the most active compound with the IC50 value 22.4 ± 0.45 μM and it had Cl at para position of the aryl ring in all three substituents R. The next active most compound was (3a) with IC50 value 26.4 ± 0.47 μM, it had unsubsituted aryl ring. Compound (3b) also showed good activity with the IC50­ value 36.5 ± 0.33 μM, it had N,N-dimethyl substituents on para position in all three aryl rings. The least active compound was (3d) with the IC50­ value 41.2 ± 0.16 μM. From the results, it was found that urease inhibition activity depends on the number of aryl rings and substituents on it. As the number of aryl ring increases, the probability of π-π stacking of aryl rings with the active sites of enzyme or its side chain which contains cysteine or methionine groups also increase (Rego et al., 2018). As a result, good urease inhibition activity was shown by the synthesized triaryl triglycerides (3a-3d), compared to the monoglycerides reported by Sheikh et al., (2018). Taha et al. (2016) reported that the incorporation of electron-withdrawing groups on aryl ring increase the polarizbility and inhibition activity towards urease enzyme. As results showed that the most active compound (3c) also contains three Cl at para position of all aryl rings and was found most active among rest.

Blaser MJ. Helicobacters are indigenous to the human stomach: Duodenal ulceration is due to changes in gastric microecology in the modern era. Gut 1998; 43: 721-27.

Bremner JM, Krogmeier MJ. Evidence that the adverse effect of urea fertilizer on seed germination in soil is due to NH3 formed through hydrolysis of urea by soil urease. Proc Natl Acad Sci USA. 1989; 8: 8185-88. 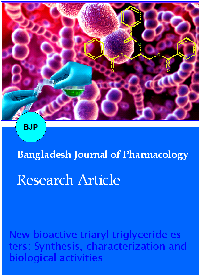