Mastoparan B (MP-B), a cationic tetradecapeptide isolated from the venom of the Vespa basalis, exhibits cardiovascular effects, local edema and antibacterial activity. In this study, the anti-adipogenic effect of an MP-B analogue and its mechanism of action in 3T3-L1 preadipocytes were studied. The MP-B analogue (MP-B12) inhibited preadipocyte differentiation and decreased the expression of adipogenic transcription factors, including CCAAT/enhancer binding protein-alpha (C/EBPα), nuclear receptor peroxisome proliferator-activated receptor gamma (PPARγ) and sterol regulatory element-binding protein-1 (SREBP-1). Moreover, MP-B12 regulated the phosphorylation of Akt and glycogen synthase kinase-3 beta (GSK-3β), both of which play a role in preadipocyte differentiation, in which insulin and certain growth factors stimulated adipogenesis. This study demonstrates that MP-B12 inhibits preadipocyte differentiation and the accumulation of lipid droplets in 3T3-L1 preadipocytes and could potentially be used to treat obesity.

Adipose tissue plays a crucial role in the energy storage, lipid homeostasis and fatty acid release. Obesity occurs when the energy intake exceeds the energy expenditure, and this disease is epidemic both in the developed and developing countries (Ogden et al., 2014; Zimmet et al., 2014). Obesity is defined as increased fat mass due to an increase in the number and size of adipocytes. Obesity leads to metabolic complications, including type II diabetes, insulin resistance, hyperlipidemia, hypertension, coronary heart disease and cancer (Spiegelman and Flier, 1996).

Several drugs have been used to treat obesity, such as orlistat, sibutramine, dinitrophenol, and thyroid hormone. These drugs can cause serious adverse effects, including dry mouth, insomnia, anorexia and valvular heart disease (Halford, 2006). Thus, research aimed to find out the healthy food or drug without adverse effects that is required for the prevention and treatment of obesity

Mastoparan B (MP-B) is a cationic tetradecapeptide (LKLKSIVSWAKKVL-NH₂) isolated from the venom of the Vespa basalis hornet of Taiwan (Kang et al., 2013b). The MP-B peptide has a wide-range of biological activities, including stimulation of histamine release, erythrocyte lysis and antimicrobial activity against bacteria (Gwon et al., 2013). However, the anti-obesity effect of MP-B has not been described. We constructed an MP-B analogue peptide (MP-B12, LKLKSIVSWAKAVS-NH₂), which is a derivative of MP-B with an Ala substitution at the 12th residue. In this study, we evaluated the inhibitory effects of MP-B and MP-B12 on adipogenesis, and investigated how MP-B12 acts to reduce the differentiation of preadipocytes into adipocytes.

Following identification by sequencing, nine peptides were synthesized using the solid-phase synthesis method on an ASP48S pepsynthesizer using 9-fluorenylmethoxycarbonyl (Fmoc)-polypeptide active ester chemistry in Peptron Inc, Korea (Table I). Each analogue’s residue was replaced by Ala.

Table I: Primary structure of MP-B and its analogues

3T3-L1 preadipocytes were cultured in 96-well plate and treated with MP-B and MP-B12 for 24 hours. After incubation, 10 μL of WST-1® (Daeil Lab Service, Korea) was added to each well, and the plate was incubated at 37°C for 3 hours. The absorbance was measured at 460 nm with an ELISA reader (Molecular Devices, USA).

On day 9 after the induction of differentiation, the cells were stained with Oil Red O. The cells were washed and fixed in 10% formalin (Junsei Chemical Co. Ltd, Japan) for 1 hour. The cells were then stained with filtered Oil Red O solution (60% isopropanol and 40% water) (Sigma-Aldrich, Japan) for 30 min. After staining, the stained lipid droplets were viewed on an inverted microscope (magnification ×200). The stained lipid droplets were dissolved in 100% isopropanol (to extract intracellular Oil Red O stain) and the absorbance was measured at 520 nm.

The intracellular triglyceride contents were measured in 12-well plates using a commercially available triglyceride quantification kit (BioVision, Inc., USA) according to the manufacturer’s instructions. On day 9, the treatment medium was removed, and cells were rinsed with PBS. Another 200 μL PBS was added to each well, and the contents were homogenized by sonication for 1 min. Total triglycerides were measured using the assay kit.

3T3-L1 preadipocytes were treated with MP-B and MP-B12 during adipocyte differentiation. After treatment, cells were collected and lysed in PRO-PREP™ protein extraction solution (iNtRON Biotechnology, Korea). The protein samples were resolved by 12% SDS-polyacrylamide gel electrophoresis (SDS-PAGE) and transferred to a nitrocellulose membrane (PALL Life Sciences, USA). The membranes were blocked with PBST buffer (0.5% Tween-20) containing 5% skim milk. After blocking, the membranes were probed with primary antibodies (Cell Signaling Technology Inc., USA) and then incubated with horseradish peroxidase-conjugated anti-rabbit IgG or anti-mouse IgG as second antibodies. The blots were visualized by an enhanced chemiluminescent (ECL) detection solution (Abfrontier Ltd., Korea).

All statistical analyses were performed using the Prism 7.0 software (GraphPad, USA) for Windows. Statistical significance of differences between values was calculated for various experimental and control groups. The results are presented as the means ± SD error of the mean (S.E.M.). An ANOVA post hoc test and subsequent Dunnett’s multiple tests were used for additional statistical analyses.

Microscopic analysis of Oil Red O stained 3T3-L1 cells, cultured in the absence and presence of MP-Bs, revealed the accumulation of intracellular lipid droplets. The quantification of the extracted Oil Red O stain showed that the lipid content was strongly reduced by 10 μM MP-B12 compared to positive control (Figure 1). Thus, both MP-B (native form) and MP-B12 were used in subsequent experiments in this study. Figure 2: Effect of MP-B peptides on cell viability in 3T3-L1 cells. The cells were cultured with MP-B and MP-B12 (0~20 μM). The data were expressed as the percentage of cell viability and represented as the means ± SE of three experiments in which each treatment was performed in triplicate. ap<0.05 Figure 4: Effect of MP-B peptides on protein expression in 3T3-L1 cells. Differentiation of 3T3-L1 preadipocyte was induced by MDI medium in the absence or presence of MP-B peptides. The expression levels of various proteins were determined by Western blot analysis

Over the past several years, the anti-obesity effects of many natural substances have been reported to be mediated through regulation of adipogenesis. However, there are few studies on mastoparan, an anti-aidpogenic candidate compound derived from the bee, in the early stage of 3T3-L1 preadipocyte differentiation. In this study, we investigated the overall anti-adipogenic effect of mastopran via regulation of SREBP-1, PPARγ and CEB/Pα gene expression, as well as via the PI3K/Akt pathways.

Our date showed that MP-Bs treatment reduced the amounts of Oli Red O staining in a dose-dependent manner, and microscopic inspection showed a decrease in the level of accumulated intracellular lipid droplets. The triglyceride levels of 3T3-L1 were markedly reduced by treating with MP-Bs. Triglycerides were used as a marker of adipogenesis, as they play an important role in transporting fatty acids and serve as an energy source (Lampe et al., 1983).

One of the established signaling mechanisms for increasing PPARγ gene expression is mediated by Akt in adipocyte differentiation. Akt plays a crucial role for glucose regulation and lipid metabolism in insulin signaling, and stimulates GSK3β, a down-stream target of Akt. In this study, the effects of MP-Bs on phosphorylated Akt were assessed during adipocyte differentiation of 3T3-L1 cells. Treatment with MP-Bs suppessed the MDI-induced phosphorylation of Akt and its upstream signals, including PI3K p110 isoforms (α, β, γ) and mTOR. The PI3K signaling pathway plays an important role in regulating adipose mass, obesity, and diabetes. PI3K is involved in a signal transduction system down-stream of the insulin receptor (IR) (Zhang et al., 2013). Glycogen synthesis kinase 3 beta (GSK3β) is a critical down-stream signaling protein of the phosphoinositide 3-kinase (PI3K)/Akt pathway (Song et al., 2013). Insulin signaling activates Akt through PI3K and induces serine/threonine phosphorylation of down-stream target GSK3β (Song et al., 2013). Phosphorylation of insulin-stimulated Akt was reduced after treatment with MP-B and B12 decreased the level of phosphor-Akt in a dose-dependent manner. In addition, insulin-stimulated phosphorylation of GSK3β decreased with the addition of MP-Bs. These results demonstrate that MP-Bs inhibit the phosphorylation of Akt, which suppresses phosphorylation of its substrate kinase GSK3β. In the case of PI3K p110 isoforms, MP-B suppressed expression greater than MP-B12. MP-B specifically inhibits expression of PI3K and MP-B12 reduced cellular lipid accumulation in a dose-dependent manner in 3T3-L1 cells.

Treatment with MP-Bs attenuated lipid differentiation in cells, as determined by Oil Red O staining and a triglyceride accumulation assay, without causing cytotoxicity. Furthermore, MP-B12 has a greater anti-adipogenic effect than MP-B, which is achieved through the down-regulation of C/EBPα, PPARγ, and SREBP-1 expression and phosphorylation of ERK1/2, AMPKα and the Akt signaling pathway. These data collectively indicate that MP-Bs, especially MP-B12, are potent inhibitors of adipocyte differentiation. 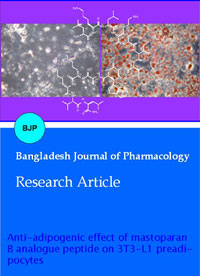