The primary injury is accompanied by secondary damage which includes the development of inflammation, onset of cell death by necrosis, apoptosis and autophagy (Liu et al., 1999). Therefore, secondary spinal cord injury is more harmful to the animals in comparison to the primary injury as it involves degeneration of the nervous system. The secondary spinal cord injury can be prevented as well as reversed by the use of chemotherapy and physiotherapy at an early stage (Sun et al., 2017).

Ludartin is a member of sesquiterpene lactone family and shows several pharmaceutical properties like antimicrobial, cytotoxic and antitumor (Rabe et al., 1985).  Significant biological importance of ludartin has attracted its structure-activity relationship studies for the development of better and more active candidates. During these observations, the most active compound ludartin triazole was discovered (Rodriguez, 1976).

The aerial parts of the plant Stevia yaconensis var. subeglandulosa (1.5 kg) were collected in March, 2016 from the Tropical Botanical Garden, China. They were dried at room temperature and finely powdered. The plant material was authenticated by Zhe‑Jun Zheng, a noted plant Taxonomist. The specimen sample was preserved in the Herbarium (voucher No. 106/16TBG).

The powder (50 g) was extracted with chloroform at room temperature for 24 hours. The evaporation of chloroform afforded 2.5 g of the residue which was then subjected to partitioning between three solvents, methanol (700 mL), petroleum ether (100 mL) and distilled water (200 mL). The fraction of methanol-water was concentrated under reduced pressure and then treated with chloroform. After chloroform evaporation, 1 g residue was obtained which was then adsorbed on 1.5 g of silica gel. The extract was subjected to chromatographic separation using 60-120 mesh silica gel. The percentage yield of ludartin obtained was 1.98.

The various fractions obtained from the column were pooled together, concentrated and then dried to obtain the white amorphous powder of the desired product. The fractions were subjected to thin layer chromatography.

Twenty-five male Sprague‑Dawley rats (260‑320 g) were supplied by the Experimental Animal Center belonging to the Guangxi Institute for Food and Drug Control. Immediately the rats were put into animal house with a controlled temperature of 22‑24°C and humidity in the range 55 ± 5%. Rats were exposed to 12 hours light/dark cycle and provided free access to laboratory food and water. Rats were subjected to well set procedure involving spinal cord injury by compression in mid‑thoracic region (Rivlin and Tator, 1978). Briefly, rats were anesthetized using 1% urethane solution, placed on heating pad with temperature 37°C under sterile condition. Along the middle of the back, incision was made longitudinally to expose the muscles over the vertebral column. The dissection was carried out carefully in order to perform laminectomy on T6/T7 vertebrae. The mid‑thoracic region of spinal cord was covered with aneurysm clip for 45 sec to keep the rat paraplegic. The incision was stitched and rat was kept on heat pad until gaining consciousness.

The activity of myeloperoxidase in the tissues of spinal cord was examined on day 5 using reported protocol (Hillegass et al., 1990). The rats anesthetized using 1% urethane solution were subjected to extraction of spinal cord tissues which were subsequently treated with K2PO4 buffer (50 mM) at 7.0 pH. The tissues were then centrifuged at 5,000 x g for 15 min at 4°C and the pellets obtained were put into K2PO4 buffer mixed with C16H33N(CH3)3Br. The pellets were subjected to freeze and thaw cycles under sonication followed by centrifugation for 5 min at 4°C at 5,000 x g. Small volumes of the aliquots were reacted with o‑dianisidine, K2PO4 buffer and hydrogen peroxide solution. Absorbance of the samples was recorded using spec­trophotometer at 455 nm to determine myeloperoxidase activity in U/g.

The extracted tissue samples of spinal cord were treated with potassium chloride for homogenization. The level of malondialdehyde was then determined in the tissue homogenates by thiobarbituric acid treatment using the reported procedure (Beuge and Aust, 1978). Briefly, the homogenates were reacted with thiobarbituric acid and absorbance was measured at 535 nm wavelength. The activity of glutathione was analyzed using the commercially available glutathione kit (Cayman, USA) in accordance with the manual protocol.

The activity of superoxide dismutase in the tissues of spinal cord was determined using spectrophotometer (UV‑2100; Shimadzu Co. Ltd., China). The supernatant was treated with xanthine in accordance with known procedure (Oyanagui, 1984). Measurement of absorbance was performed at 557 nm wavelength using a spectrophotometer (Rabiei and Rafieian, 2014).

On day 5, rats were sacrificed after 1% urethane anesthetization to perfuse paraformaldehyde (4%). From the spinal cord, 2 mm segments were extracted at caudal and rostral site to the injury. The tissue sections were placed for 20 hours in paraformal­dehyde (4%) and subsequently transferred to sucrose solution. The tissues were then sliced into 20 μm sections axially and subjected to permeabilization in for 45 min in Triton X‑100. The sections were then incubated for 2 hours at 37°C in donkey serum. Again the sections were incubated for overnight at 4°C with antibodies against NeuN (dilution 1:100; catalog number ab104224; Abcam, UK) and TUNEL. Then the incubation was carried out at room temperature for 1 hour with secondary antibodies (Alexa Fluor 488 donkey anti‑mouse IgG; diluted 1:100; ab150105; Abcam).

Analysis of rat behavior on inclined plane and motor function

The behavior of rats on day 2, 4, 6, 8, 10, 12 and 14 after spinal cord injury was analyzed by examining their ability to balance on wooden beams kept in inclined position. The protocol used was based on the method with slight modification (Rivlin and Tator, 1977). The device consisted of a plate which could be adjusted through an angle of 0‑90°. The recovery of motor function of the rat limbs was analyzed using Basso, Beattie and Bresnahan scale. The scale consisted of 21 divisions for assigning motor limb recovery score (Basso et al., 1995). On this scale the normal rats were assigned 21 and those with paralysed limbs a score of 0. The method involved allowing the rats to move forcibly in open field for 30 min on day 2, 4, 6, 8, 10, 12 and 14 after spinal cord injury and examine their hind limb movements. The hind limb score determined was expressed as the average of three measurements.

The values presented are the mean of SD of three independently carried out experiments. The statistical differences among the groups were analyzed by one‑way ANOVA followed by Bonferroni correction. Statistically significant differences were taken at the values of p<0.05.

Figure 1: Changes in oxidative factor expression (myeloperoxidase, malondialdehyde and superoxide dismutase) (A) and glutathione (B) levels in rat with spinal cord injury (SCI) by ludartin. The values represented are the mean obtained from three independently performed experiments. ap<0.05 and bp<0.02 vs. untreated spinal cord injury rats Figure 2: Regulatory effect of ludartin on NeuN and TUNEL-positive cell population in spinal cord injury (SCI) rats. The tissues were examined after immunofluorescent staining and examined for NeuN and TUNEL-positive cell population. The expressed values are average of three results carried out independently. ap<0.05 and bp<0.02 vs. untreated spinal cord injury rats

Expression of caspase-3, Bax and Bcl‑2 The tissues of spinal cord injury rats showed marked enhancement of tumor necrosis factor‑α, interleukin‑1β and I interleukin‑6 level than the rats in control group. Among the three ludartin treatment groups, the level of these three cytokines was reduced comparably equal to that of control rats in 3 mg/kg treatment rats (Figure 4). Thus, ludartin treatment reversed the effect of spinal cord injury on tumor necrosis factor‑α, interleukin‑1β and interleukin‑6 level in the tissues of rats in dosage based manner. In the current study, investigation of therapeutic role of ludartin on spinal cord injury in rat model was planned. It was observed that ludartin prevented neuronal damage by inhibiting expression of inflammatory cytokines and proapoptotic factors. Ludartin treatment considerably improved locomotion of spinal cord injury rats which was clear by high inclination plane and Basso, Beattie and Bresnahan scores.

Spinal cord injury leads to neuronal apoptosis and subsequent degradation of neurological system (Blight, 1991). Study of the mechanism of primary and secondary spinal cord injury has revealed the involvement of several cellular signalling pathways (Song et al., 2013). The major contributing pathway which causes neuronal damage and development of secondary spinal cord injury has been identified as oxidative stress (Juurlink and Paterson, 1998). The neutrophils and monocytes contain a positively charged protein called myeloperoxidase which catalyses oxidative damage to nerve cells (Juurlink and Paterson, 1998). Another oxidative stress inducing factor is malondialdehyde which is generated as the final product of lipid peroxidation (Juurlink and Paterson, 1998). However, the two enzymes which act as scavengers for free radicals present in cells are glutathione and superoxide dismutase (Juurlink and Paterson, 1998). Studies have demonstrated that inhibition of oxidative stress can prevent the neuronal cell damage and development of secondary injury (Impellizzeri et al., 2011). In the current study, level of myeloperoxidase and malondialdehyde was found to be enhanced and the activation of glutathione and superoxide dismutase was suppressed in spinal cord injury rats. However, ludartin treatment prevented spinal cord injury-mediated enhancement of myelo­peroxidase and malondialdehyde as well suppression of glutathione and superoxide dismutase activity. These findings indicated that ludartin exhibits its effect inhibiting oxidative damage to neuronal cells.

To perform experiments using animal, the approval was obtained from the Animal Care and Use Committee of Xi'an Medical University.

The support from the Head, Department of Orthopedics, Wuwei People's Hospital, China is acknowledged. 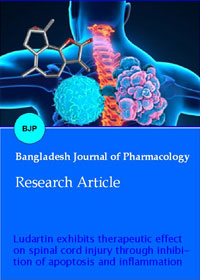