Ischemic heart diseases are the leading causes of mortality all over the world (Judith et al., 2013) and the strategies to restore blood flow in the ischemic areas of the heart often encounter ischemia reperfusion injury. Hydrogen sulfide, one of the well-known cardioprotective gasotransmitters (Wang, 2004), is reported to attenuate the ischemia reperfusion injury by preserving the mitochondrial functional activities. Miotchondrial ATP-sensitive potassium channel (mitoKATP) channel play  a crucial role in regulating the mitochondrial functional activity by changing the mitochondrial matrix volume (Kaasik et al., 2007), mitochondrial respiration rate and modulating membrane potential. Among the four potassium channels in the inner mitochondrial membrane, mitoKATP and mitoBKCa channels are known to interact with hydrogen sulfide (Walewska et al., 2018). Evidences from the literature support a direct interaction of hydrogen sulfide on mitoKATP,  where it sulphydrates the Cys43 in the Kir6.1 subunit (Mustafa et al., 2011).

Many drugs like nicorandil, bimakalin, pinacidil and levosimendan, that specifically target mitoKATP are known to be effective in the management of cardiovascular diseases especially ischemia reperfusion  (Pollesello and Mebazaa, 2004). Moreover, gas signaling molecules like H2S, NO and CO are reported to provide cytoprotection via modulating the opening of mitochondrial potassium channels. This in turn regulates different cardioprotective signaling pathways, reported to have converging targets in mitochondria (O’Rourke, 2004).

The experiments were carried out with 250-300 g  Wistar male rats. The rats were kept under a standard condition with regular diet and water ad libitum.

The rats were anesthetized with 60 mg/kg sodium thiopentone and the hearts were excised and mounted in the Langendorff apparatus (AD Instruments, Australia) as per the previous procedure with slight modification (Chevion et al., 1993). The heart was stabilized for 20 min with Krebs-Henseleit buffer (NaCl 118.0 mM, KCl 4.7 mM, CaCl2 1.9 mM, MgSO4 1.2 mM, NaHCO3 25.0 mM, KH2PO4 1.2 mM, glucose 10.1 mM) perfusion, maintained at 37°C and pH of 7.4. The buffer was oxygenated (95% O2 + 5% CO2) throughout the experiment. The perfusion was carried out according to the animal groups. Ischemia was given for 30 min by switching off the buffer flow, followed by reperfusion (reflowing the buffer into the heart) for 60 min. Preconditioning was given for 15 min in three cycles following 10 min stabilization. Each cycle consisted of 2 min ischemia followed by 3 min reperfusion.

The activities of glutathione peroxidase and glutathione reductase were measured in the heart mitochondrial fraction as per the pre-described protocols  (Blankenberg et al., 2003; Goldberg and Spooner, 1983). The level of reduced glutathione in the heart mitochondrial fraction was estimated to determine the oxidative stress by the method described elsewhere (Beutler and Kelly, 1963). Catalase activity was measured by following the rate of  hydrogen peroxide consumption according to the method described elsewhere (Baudhuin et al., 1964). Total superoxide dismutase activity was measured by the pre-established procedure (Nandi and Chatterjee, 1988).

Data were presented using ± SD. For statistical analysis, GraphPad Prism 5.0 was used. One-way analysis of variance (ANOVA) followed by Dunnet’s test was carried out to know the difference between groups.  p<0.05 was considered as statistically significant.

The cardiac physiological performance in ischemia reperfusion-treated rat heart was significantly different from the normal rat heart (Table I). The use of mitochondrial KATP channel closer (glibenclamide) and opener (diazoxide) in ischemia-reperfusion showed improved hemodynamics but prominent recovery was observed by diazoxide as measured by end diastolic pressure, developed pressure and rate pressure products respectively.

Cardiac injury was assessed via measuring triphenyltetrazolium chloride staining, where glibenclamide or diazoxide pretreatment exhibited 36 and 86% decline in cell death from ischemia reperfusion control respectively. This result was supported by significant decline of lactate dehydrogenase level (2.9 ± 0.4 and 1.8 ± 0.2 respectively) and creatine kinase level (0.4 ± 0.1 and 0.4 ± 0.2 respectively) activity in the myocardium (Figure 1). Figure 1: Effect of hydrogen sulfide on ischemia reperfusion-induced myocardial injury: hydrogen sulfide preconditioning effect on cardiac injury markers across the groups was represented by the activities of (A) lactate dehydrogenase and (B) creatine kinase. Values were expressed as mean ± SD of n=6 rats/group. astatistically significant from normal perfusion (p<0.05) By using diazoxide (KATP channel openers), the present study demonstrated the reversal of hydrogen sulfide-mediated cardioprotection and the observed adverse effect was associated with the persistence opening of the channel. This was well in agreement with previous work by Pomerantz et al, who showed transient opening of mitochondrial KATP channel with diazoxide provided  protection to human atrial trabeculae against ischemia-reperfusion injury and a loss of cardioprotection was observed when diazoxide treatment was clubbed with ischemic preconditioning, due to the continuous opening of the potassium channel (Pomerantz et al., 2000). KATP channel modulates the mitochondrial function by changing the matrix volume, membrane potential and oxygen consumption that resulted in the release of varying concentration of reactive oxygen species and calcium ions. The concentration of diazoxide/glibenclamide plays a key role in determining the transient or permanent opening of the KATP channel. For instinct, for the pharmacological action, glibenclamide of concentration 1.2 nM is required in atrial KATP channel, whereas 1-2 µM is required to induce the effect on KATP channel in mitochondria (Foster and Coetzee, 2016). Thus, the sensitivity of the chemicals will change depending on the metabolic activity of the cardiac cell type that may be varied in different diseased conditions. The hydrogen sulfide being a potassium channel opener works similar to diazoxide, it is highly recommended to determine a threshold dose for the transient opening of the mKATP channel, which is essential for its clinical success.

Targeting KATP channel may not be good option to target interfibrillar mitochondria/subsarcolemmal mitochondria against ischemia-reperfusion injury.

All the animal experimental protocols were approved by Institutional Animal Ethical Committee of SASTRA University, Thanjavur, Tamilnadu. Experiments were done in accordance with the guidelines of Control and Supervision of Experiments on Animals, Chennai, India (CPCSEA Approval No.: 347/SASTRA/IAEC/RPP).

Pollesello P, Mebazaa A. ATP-dependent potassium channels as a key target for the treatment of myocardial and vascular dysfunction. Curr Opin Crit Care. 2004; 10: 436-41. 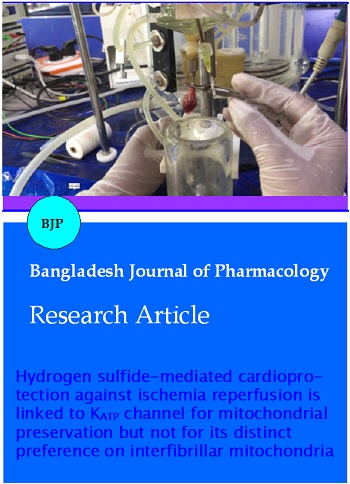