Inflammation is fundamentally a protective response, ultimate goal of which is to get rid the noxious but sometimes it may be potentially harmful and needs pharmacological treatment to control its symptoms (Kumar et al., 2004).

Many anti-inflammatory drugs (both NSAIDs and corticosteroids) have been developed but their safety profile studies have shown that none of them is clearly safe (Rang et al., 2003). They show wide ranges of adverse effects. Due to adverse reactions of synthetic and chemical medicines being observed round the globe, herbal medicines have made a come back to improve our basic health needs. Many plants and herbs such as ginger, turmaric, olive oil, have been shown to exhibit potent anti-inflammatory effect. Neem is reported in ayurvedic, tibbi and homoepathetic system of medicine to be useful in rheumatic disorders (Biswas et al., 2002).

More than 135 compounds have been isolated from different parts of neem. Some of them such as   nimbin, nimbinin, nimbidinin, nimbolide and nimbidic, are biologically active (Chatterjee and Pakrashi, 1994).

The present study was carried out to compare the anti-inflammatory effect of neem with dexamethasone.

The experiments were carried out on 30 Albino rats of either sexes aged two and half months, weighting 150-250 g, collected from the animal house of International Center for Diarrheal Diseases Research of Bangladesh, Dhaka.

The leaves of neem were collected, washed with clean water and dried and powdered. They were grinned and mixed in 4 liters of distilled water and allowed to sock overnight. The suspension was centrifuged at speed of 3,000 rpm and filtered through a Whitman No. 1 filter paper. The supernatant fluid was allowed to evaporate in glass petri dishes. When completely dry, the powder was collected by scraping and was stored. Stock solution was prepared by dissolving 500 mg of extract in 5 ml of distilled water. The dose of neem leaf extract is 1.0 mL of solution, used in the experiment representing 400 mg/kg body weight. Active ingredient of dexamethasone, used in this experiment was collected from the General Pharmaceutical Company, Bangladesh. The stock solution of dexamethasone was prepared by dissolving 20 mg of dexamethasone in 1 mL of alcohol.

Paw edema was produced in the right hind paw of rats by injecting 0.1 mL of 2% formalin in 0.9% NaCl subcutaneously in the planter surface near the central region of planter aponeurosis (Damas and Liegeois, 1999).

The percentages of inhibition of increased circumferential length of hind paw edema of rats in both the control and drug-treated groups were compared by using formula: {(C – T) ¸ C } ´ 100 where T and C stands for test and control respectively (Ray et al., 1980).

All values expressed as mean ± SEM, where SEM represents the standard error of mean. Students’ unpaired ‘t’ test was performed to evaluate the statistical differences. The p value of 0.05 or less was regarded as significant.

Table I: Effects of neem extract and dexamethasone on circumferential length of the hind paw edema Similar observations were made by number of researchers. Water soluble part of alcoholic extract of neem leaves at a dose of 200 mg/kg orally exerted significant anti-inflammatory activity in cotton pellet granuloma assay and also inhibited the biochemical mode of action on inflammation significantly. This anti-inflammatory activity of neem leaf extract might be due to stabilization of lysosomal membranes and antiproliferative effect (Chattopadhyay, 1998).

Chattopadhyay et al. (1993) also done experiment with Azadirachta indica leaf extract and reported that its anti-inflammatory effect is by inhibiting action of 5-HT and PGE1 on inflammatory edema induced by chemical mediators such as 5-HT, histamine, bradykinin and PGE1.

Okpanyi and Ezeukwa (1981) reported the profound anti-inflammatory effect of neem extract.  It is at a dose of 400 mg/kg body weight equipotent to 50 mg/kg acetylsalicylic acid and 4 mg/kg indomithacin.

Nimbidin, a crude extract of neem extract at a dose of 80 mg/kg showed significant anti-inflammatory effect that is almost similar to that of predinisolone at a dose of 10 mg/kg (Pallai and Shanthakumari, 1981).

From the results in this study it can be concluded that neem leaf extract exhibits significant anti-inflammatory effect but it is less efficacious than that of dexamethasone. Further study may be done to find out the exact anti-inflammatory mechanism of action of neem. 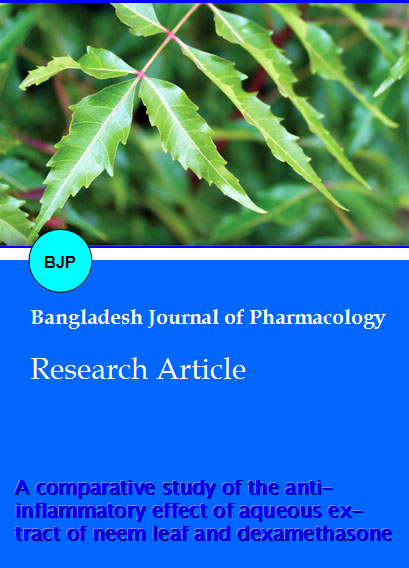