In surgery antibiotic prophylaxis refers to the administration of antimicrobial agents to patients without evidence of established infection with the objective of reducing subsequent post-operative septic complications (Nichols, 1981). The antimicrobial is given intravenously just prior to or 1 hour before induction of anesthesia.

The general principles of antimicrobial chemoprophylaxis should be directed towards specific pathogen and there should be no development of drug resistance during the period of therapy and it should be used for a limited duration as well. Moreover, conventional therapeutic doses should be employed and prophylaxis should be employed only in situations of documented drug efficacy (Trevor, 2002). Prophylactic antibiotics exert their greater effect in clean–contaminated surgical procedures (Relman, 1982).

Metronidazole has been found to be effective in general and gynecologic surgery, in which anerobes constitute a large act of the colonizing bacterial flora (Kaiser, 1986). Cefazolin penetrates well in most tissues. It is a drug of choice for surgical prophylaxis (Chambers, 2007). Ciprofloxacin and metronidazole are also used as prophylaxis in abdominal hysterectomy (Rahman, 2005).

The most critical factors in the prevention of post-operative infections, although difficult are the sound judgment and proper technique of the surgeon and surgical team, as well as the general health and disease state of the patient (Nichols, 2001).

Intra-abdominal infections are polymicrobial and result in substantial morbidity and mortality. The combination of ciprofloxacin/metronidazole as well as several β–lactum based regimens are among the commonly used regimens for the treatment of patients with such infections. The ciprofloxacin and metronidazole combination may be superior to β–lactum based therapeutic regimens in the treatment of intra-abdominal infections with regard to cure of infections although no difference in mortality was found (Mathaiou, 2006).

The choice of an antibiotic depends on the expected spectrum of organisms likely to be encountered, the cost and local hospital policies, which are based on experience of local resistance trends (Koch, 2004)

Information regarding antimicrobials prescribed, name of antibiotics, duration of antimicrobial therapy, indications for which patients underwent surgery and incidence of post-operative infection were recorded in a data collection form. Variable recorded in the study were age of the patient, gender, monthly income, diagnosis, duration of hospital stay and occurrence of infection.

All analysis was done using the statistical package for social science (SPSS) software for windows. To compare the differences between groups, Chi-square tests were performed.

There were 33 cases of infection out of total 300 study subjects.

Table I: Proportion of subjects had wound infection in the study subjects

In the present study the overall rate of infection is 11% which seemed to be relatively higher compared to other studies. However, in one study carried out in SSMC, rate of infection was 8% where abdominal hysterectomy was performed in a group of middle aged patients (Rahman, 2005). This figure is closely similar to the present finding.

In SSMC, the rate of infection is relatively higher than DNMC because of less cleanliness and presence of more attendants in the ward. In DNMC, the ward was almost clean and attendants of the patient were low.

Low infection rates in clean cases are best obtained by strict adherence to the principles of good surgical technique. Other factors which help to keep the infection rate at a minimum include – a short pre-operative stay in the hospital, avoidance of shaving just prior to operation and pre-operative bathing with an antiseptic soap, moreover the cleanliness of the post-operative room (Nichols, 1981).

The infection rate could be reduced if sterilization procedure of the operation theater and general condition of the patients were improved. If these risk factors could be minimized, single dose prophylactic antibiotic can be effectively practiced in our country.

The prophylactic antibiotic will be effective in reducing post-operative infection if the proper drug is chosen.

Mathaiou DK, Peppas G, Bliziotis I, Falagas ME. Ciprofloxacin/metronidazole versus β-lactum based treatment of itnra-abdominal infection: A meta-analysis of comparative trials. Elsevier B, V and International Society of Chemotherapy, 2006. 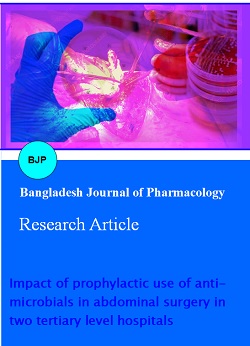