The aim of the present study was to investigate two pharmaceutical groups including fentanyl-midazolam and midazolam-ketamine used as patient sedation analgesia for the orthopedic emergency procedures. This is a prospective randomized double-blind and placebo-controlled trial study. Trauma patients admitted to emergency department who needed emergency reduction were enrolled. Finally 81 patients with mean age of 31.7 ± 20.6 years old were participated (64.2% male). It is likely that the combination of midazolam-ketamine had a better performance in terms of the duration of hypoxia (p= 0.01), and pain scores during reduction (p=0.001). However, adverse effects was higher in the midazolam-ketamine group compared to the fentanyl-midazolam. The level of satisfaction of physicians and patients were the same.

Orthopedic reductions are among the most prevalent procedures in the Emergency Department. These procedures are painful and stressful. Reduced anxiety and pain control are important issues that the emergency physicians are faced with (Migita et al., 2006). According to the American Emergency Physicians Association guideline 2005, Procedural Sedation and Analgesia (PSA) has been defined for the utilization of dissociative or sedative agents with or without analgesics during the painful procedures, provided that the performance of cardiorespiratory system is maintained (Baratloo et al., 2016; Bordo et al., 2008).

The potential benefits of effective sedation prior to reduction include the reduced anxiety and distress of the patient, providing comfort followed by more cooperation of patients, improvement of the success of the procedure and obviation the general anesthesia (Alimohammadi et al., 2014; Migita et al., 2006).

According to the recent studies ketamine, midazolam and fentanyl which are the most commonly used drugs for PSA, will be useful if they are used for sedation of patients in appropriate doses under necessary supervision and monitoring (Cevik et al., 2013). The objective of the current study was to compare the effectiveness and side effects of two pharmaceutical groups of low-dose midazolam-ketamine and fentanyl-midazolam used for PSA during the reduction of dislocations and fractures in the Emergency Department.

This is a prospective double-blind randomized clinical trial conducted from March 2015 until June 2016 in the academic Emergency Department of Valiasr Hospital, Arak, Iran.

Traumatic patients admitted to the Emergency Department who were in need for emergency closed reduction due to fractures or dislocations were included. Patients with systolic blood pressure <90 mmHg, pulse rate <60 beats/min, American Society of Anesthesiologists (ASA) Class I to II, chronic renal failure, liver failure and a known history of sensitivity to ketamine, midazolam or fentanyl were excluded.

Patients were randomly assigned into midazolam-ketamine and fentanyl-midazolam groups using computer-assisted randomization table. Drugs were prepared in two distinct syringes by the nurse and were administered for the patients by another nurse who was blind to the medications. Emergency physicians who were in charge of reduction, nurses administrating the medications and patients were blind to the type of treatment.

Dropping the O2 saturation below 90% or staying SPO2 under 95% for more than one min were considered as hypoxia and oxygen was administered via nasal cannula. Hypoxia, the need for oxygen or intubation, duration of hypoxia, time to onset of sedation, level of satisfaction of the emergency medicine specialist and the patient (five grades: Very poor, poor, moderate, good, and excellent), pain score during reduction by Visual Analogue Scale (VAS), SPO2, the success of the procedure, systolic blood pressure and pulse rate at 0, 5, 10, 30, 60, 90, and 120 min following the sedation implantation, the depth of sedation (on a 3-grade), any complications or side effects, duration of recovery, and hospital stay duration were recorded for all patients.

Hypoxia, time to onset of sedation, duration of hypoxia, need for oxygen, and pain scores during reduction, recovery time and the depth of sedation were considered as primary outcome measured variables. Reduction success, patient and physicians’ satisfaction, complications, and discharge time were set as secondary outcome measures.

Of 488 patients admitted to the Emergency Department with limb injuries that required emergency closed reduction, 141 patients were evaluated for inclusion in the study, 60 of whom were excluded. Finally, 81 patients with were randomly assigned into each of the midazolam-ketamine group (n=41) or fentanyl-midazolam group (n=40). Figure 1 illustrates the study recruitment process. Demographic and baseline characteristics of participants are summarized in Table I. The mean age of the studied patients was 31.7 ± 20.6 years old (64.2% male). The age (p=0.52) and the sex distribution (p=0.72), initial VAS of participants (p= 0.6), and also frequency of fractures and dislocations (p =0.32) were not statistically different between the two groups. Table I: Demographic and baseline characteristics

According to the present study findings, it is likely that the midazolam-ketamine group had a better performance in terms of the onset of sedation, pain score during reduction, and duration of hypoxia. However, the adverse effects were higher in the midazolam-ketamine groups compared to the fentanyl-midazolam group. Level of satisfaction of physicians and patients in two groups were the same.

In a randomized controlled study on 260 pediatric patients regarding orthopedic procedures, it was found that ketamine-midazolam combination is safer and more effective than fentanyl-midazolam (Kennedy et al., 1998). In a double-blind randomized trial similar to our study, researchers examined the effect of midazolam-fentanyl and midazolam-ketamine combinations on 61 orthopedic emergency patients’ sedation (Cevik et al., 2013). It seems that both combinations are useful for sedation of patients. However, due to less risk of hypoxia, and less pain score during reduction in midazolam-ketamine group, this drug combination is more appropriate for sedation in orthopedic emergency patients. Results of the study conducted by Cevik et al are similar to the present study not only in terms of the risk of hypoxia and pain score, but also in terms of the more adverse effects of midazolam-ketamine group compared to the midazolam-fentanyl group.

Based on previous studies, the incidence of hypoxia in the midazolam-ketamine and fentanyl-midazolam groups are in the range of 6-7 and 10-20% respectively (Hostetler et al., 2002; Kennedy et al., 1998; Roback et al., 2005). In the present study, hypoxia was observed in 46.3% of participants in midazolam-ketamine group and 72.5% of the participants in fentanyl-midazolam  group. None of the patients have had the experience of serious event, and no one was intubated; but two patients in fentanyl-midazolam group required intermittent positive pressure ventilation using valve-mask-balloon. Although the lack of oxygen, as determined by previous studies, was more common for fentanyl-midazolam group. Our findings for hypoxia were considerably higher than what was already reported (Cevik et al., 2013; Godwin et al., 2005; Hostetler et al., 2002; Kennedy et al., 1998; Roback et al., 2005). The genetic characteristics of participants, using standard drug dose without titration, and also considering a lower threshold for defining hypoxia (SPO2 <90%) were impressive. Titration of medication doses and the use of supplemental oxygen may help reduce the incidence of hypoxia.

Kennedy et al compared the combination of midazolam-ketamine vs fentanyl-midazolam for pediatric patients and reported higher scores of anxiety and pain, higher family anxiety, and lower satisfaction of orthopedic surgeon for fentanyl-midazolam (Kennedy et al.,1998). Godambe et al reported no difference regarding VAS score and emergency physician and nurse satisfaction between the combination of midazolam-ketamine vs propofol-fentanyl. However, it was reported that observational scale of behavioural distress score was lower in the ketamine group (Godambe et al., 2003). Jamal et al found no significant difference between and procedure success rate and the pain scores during reduction between the groups of fentanyl-midazolam and ketamine (Jamal et al., 2011).

In current study, the average pain score during reduction was lower in the midazolam-ketamine group (MK: 1.4 ± 0.1 vs FM: 3.1 ± 1.1) which is consistent with the results of previous studies, including the study conducted by Cevik (Cevik et al., 2013). According to the results of present study, the success rate of the procedures in both groups was roughly equal. Comparative studies among children show high satisfaction of physician and patient/family in the ketamine group; however, no difference was found in this regard between the two groups in the present study.

Many high-risk side effects occur in the first 25 min after drug administration and the mean time between 2-5 min. Newman et al observed side effects in 13% of patients, 64% of which were seen in the Emergency Departments (Bailey et al., 1990; Newman et al., 2003). Therefore, the follow-up time used in the present study could be considered enough to see the most side effects. Based on previous evidence, the usual side effects such as nausea and vomiting was reported in a range between 3.6 and 29% for the midazolam-ketamine group, and in the range of 1.8 to 7% for the fentanyl-midazolam group (Roback et al., 2005; Sener et al., 2011; Wathen et al., 2000). In current research, nausea and vomiting was observed in 12.1% of participants in the midazolam-ketamine group and 5% of the participants in the fentanyl-midazolam group, which is less than those reported in previous studies.

Recovery agitation is associated with the use of ketamine, which is, based on reports, in the range of 5.7-7% in midazolam-ketamine mixture. In the present study, the incidence of recovery agitation was 19% which was higher compared to the rates reported by Sener et al (Sener et al., 2011).

According to the present study, no difference was seen between the groups in terms of recovery period and sedation depth. The higher incidence of recovery agitation may be explained with the use of higher doses of ketamine and lower doses of midazolam in midazolam-ketamine combination used in this study.

The ASA recommends to avoid the oral intake of clear liquid at least 2 hours and solid food at least 6 hours prior PSA, respectively (Committee, 2011; Miller et al., 2005). A prospective observational study showed no differences in the incidence of vomiting, airway complications, and other negative effects during PSA in fasting and non-fasting groups (Agrawal et al., 2003). In their report, Godwin et al said that recent food consumption is not a contraindication for PSA (Godwin et al., 2005).

According to the data, in general anesthesia, the risk of aspiration is 1:3420 and the risk of death is 1:125109. According to reports, many of aspirations occur during intubation or extubation (Green et al., 2002; Miller et al., 2005). In the present study, no patient required advanced airway management or even airway maneuver. Although in the present study, the recommendations of ASA was not strictly followed, and even patients with recent intake were enrolled; however, aspiration did not occur in any of participants. In the present study, as expected, SBP levels increased in the midazolam-ketamine group and decreased in the fentanyl-midazolam group. This finding was consistent with the results of the study conducted by Cevik E (Cevik et al., 2013).

Although it is advised to determine the exact dose of opiates and sedatives, the weight-adjusted dose was used in this study, and individual differences were neglected for standardization. In addition, certain factors such as patients with fractures or dislocations and the need to monitor such patients in a separate unit of the Emergency Department reduced significantly the number of patients included. Considering the low number of participants, some variables did not follow a normal distribution and non-parametric tests were used perforce. Patients were just followed in the Emergency Department and late outcomes was not followed.

It is likely that the combination of midazolam-ketamine had a better performance in terms of the onset of sedation, the duration of hypoxia, and pain scores during reduction than fentanyl-midazolam.

Protocol of the study was approved by ethics committee of Arak University of Medical Sciences. The investigators were committed to Helsinki Declaration Principles. Written consent was obtained from all of patients.

The research team wishes to thank vice chancellor of research of Arak University of Medical Sciences for the financial support and also patients who contributed to this research.

Committee ASoA. Practice guidelines for preoperative fasting and the use of pharmacologic agents to reduce the risk of pulmonary aspiration: Application to healthy patients undergoing elective procedures: An updated report by the American Society of Anesthesiologists Committee on Standards and Practice Parameters. Anesthesiology 2011; 114: 495.

Miller MA, Levy P, Patel MM. Procedural sedation and analgesia in the Emergency Department: What are the risks? Emerg Med Clin North Am. 2005; 23: 551-72. 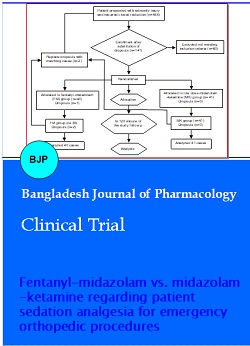